This week, John sits down with the 2017 Canadian Junior Women’s Champion, Kristen Streifel. Originally from Saskatchewan, Kristen played for the green and white for three years on the national junior stage before moving to Alberta and hoisting her first Canadian title. She’ll be looking to win Canada’s fourth gold medal in a row at the World Junior Championships. 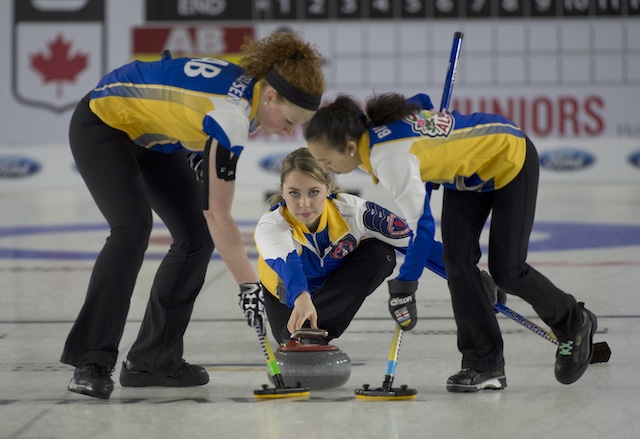 Welcome to Magical Question Fun Time, the new Curling Canada feature in which comedian John Cullen sits down with your favourite curlers for interviews like you have never seen. Each interview will feature eight questions: five standard questions that will be asked to each curler, two questions specific to that curler, and one question that the curler interviewed before them asks. 1. What’s the nicest shot you’ve ever been a part of? Kristen Streifel: That’s a tough one, but the one that springs to mind first was in our provincial final. We were tied in the 10th with the hammer, and I had to make a pretty tough shot to pick their rock off the back button. John Cullen: You know, I think I saw that shot. KS: Yeah, I think the video got around on Facebook a bit.(https://www.facebook.com/TeamStreifel/videos/1855360174717619/?pnref=story) Probably the craziest part of it was that we had seven seconds left on the clock to make it. They had something like four guards up, and I had to come through a pretty tight port to knock it off the button. JC: Having seven seconds left might’ve been a blessing and given you less time to think about how big the shot was. KS: That’s definitely true. I mean, I’m aging out of juniors after this year, so that could’ve been my last shot as a junior. Once their rock came to rest, I pretty much put the broom down to see where we could hit it, and I had to make it down to the hack so fast that it was really all a blur until her rock left the house and I saw that we won. 2. Who could you take in a fight? KS: Well, my teammates and I always joke that my second Kate (Goodhelpsen) and I would have a pretty good go at each other. We’re both kinesiology students, so we know which bones to break. [laughs] JC: [laughs] I never thought about that, but a good skill to have. Which bones are you going after first? KS: Well, first I would go for her hair, and then if that doesn’t work, I’m going straight for the femur. [laughs] She’s got the big ginger bob going on up there, I think it would be pretty easy to get a fistful of that and get it going. [laughs] JC: I have to admit, you seem to be the first person I’ve interviewed where you have legitimately discussed fighting your teammate before. How did that come up? KS: I think we were in a restaurant in Red Deer during a spiel, and you know how it is, you spend so much time with your teammates that you eventually discuss everything. I think we were talking about trying to get hit by a car to get the insurance pay out, and which bones to break so you could fake that you got hit by one. You know, casual conversation. [laughs] Then I think it came up that we know about bones so well that we should just get in a fight and break them that way. She’s stronger than me, but I’m more feisty. I think I could take her. [laughs] 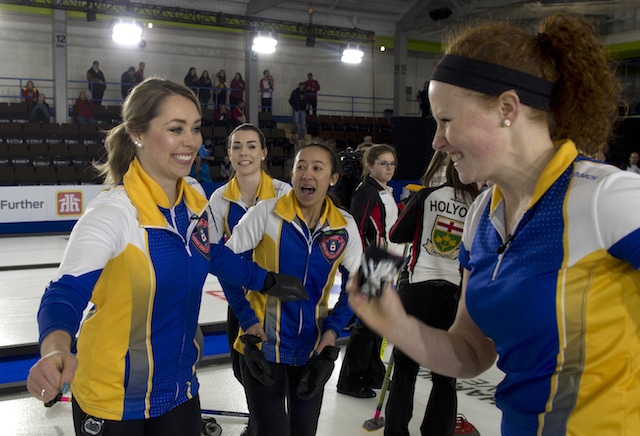 3. If a deli named a sandwich after you, what would be on it? KS: Well, I’m not a huge sandwich person, but when I was traveling to Thailand last year, I learned that mango can be included in every type of meal. So I would load a sandwich up with mango, turkey, lots of veggies, and honey mustard. JC: I think you are the first person I’ve ever heard of that would put mango on a sandwich. What would you call it? KS: Let’s call it…the Mango Tango. [laughs] JC: That sounds a little seductive. [laughs] KS: It does, yeah. I mean, I don’t think sandwiches are very seductive, but if they could be…this one would be, for sure. [laughs] 4. Now normally I ask what the worst job you’ve ever had was, but I know you’ve been mostly a career student so far, so let’s switch it up. What’s the worst class you’ve ever taken? KS: [laughs] Oh jeez, I don’t want to name the class, but I was taking this one class when I went to the Worlds in 2015 (note: Kristen was fifth for Kelsey Rocque’s rink), and I missed so much of the class that my final was worth 100 per cent of my grade. I think I went to three total classes. JC: Oh my god. That’s pretty extreme. The prof must’ve hated you. KS: Well, I walked into the final exam, two minutes late, and the whole class turned around and started clapping. The professor told me that he was proud I made it, and put three ticks on the board. I was looking at the board like “what the heck” and he said, “this is how many times Kristen Streifel has been to this class”. JC: [laughs] Oh man, that’s amazing. I assume this was in a joking fashion? KS: Oh yeah, definitely. We had been talking the whole term and I think he was actually impressed I made the final. [laughs] He said if there was an award for the most absences with a good mark still—I ended up doing well on the final—I would win it. 5. What’s a stupid thing you incorrectly believed was true for a long time? KS: When I was really young, I believed that babies were made out of food. I remember my cousin being pregnant and having a big belly, and just assuming that she must’ve eaten a lot of food. [laughs] JC: [laughs] That’s amazing. And no one corrected you? KS: No, I mean, I think I was five or six, and my mom just went along with it. You don’t want to tell your six-year-old where babies really come from, so I just said “are babies made of food?” and my mom was all, “yep, definitely, for sure.” [laughs] JC: That’s pretty awesome. So how long did you believe this for? KS: Oh jeez, it was easily a couple of years. It even went so far that I thought the gender of the baby was determined by the types of food you ate. [laughs] I thought you would eat lots of fruit if you wanted a girl, and lots of hearty foods if you wanted a boy. 6. [laughs] Incredible. Now on to the Kristen Streifel-specific questions, and last year, I was able to dig up some interesting photos and videos from Mary Fay’s past (https://www.curling.ca/blog/2016/03/15/mqft-with-mary-fay/), so I figured I would try to do the same this year, and you did not disappoint. Here’s a photo from your sister’s wedding, so uhh…do you care to explain what is going on here? KS: [laughs] Well, my brother-in-law is a power lineman, and so is his younger brother, so they have this gear they can use to climb up poles. They were, umm, perhaps a few adult beverages into the day, and had this great idea we should do a wedding photo like that. 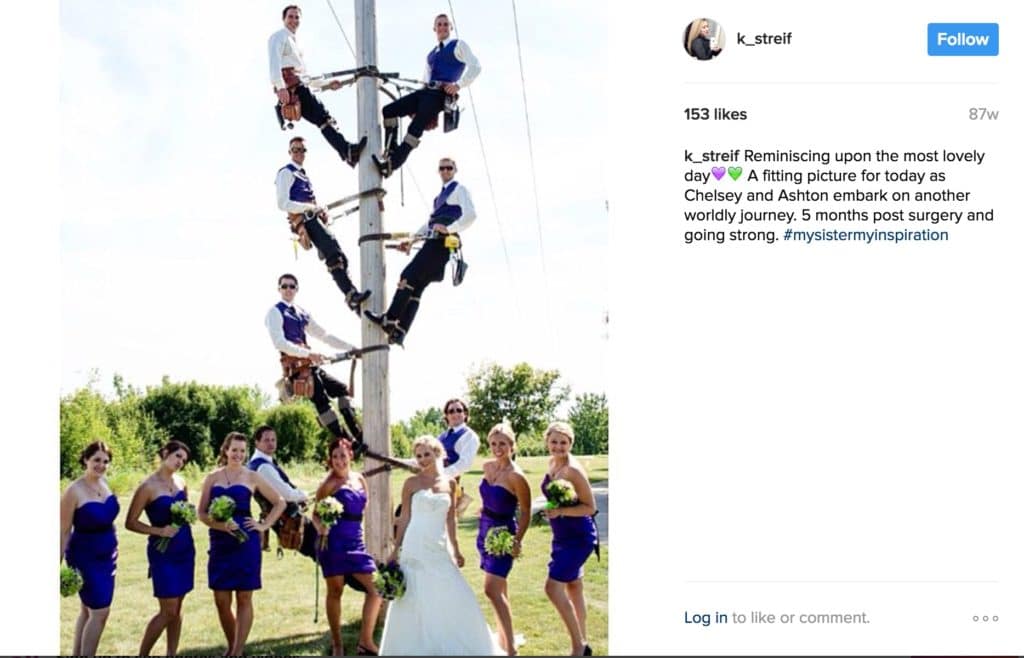 The most Saskatchewan photo ever, says Kristen Streifel

JC: [laughs] Because that’s definitely the best time to climb a telephone pole: when you’re inebriated, on your wedding day. KS: [laughs] Yeah, it was definitely amusing watching them shimmy their way up the poles, but I have to say, they all did pretty good! They did shotgun a beer right before they did it, so I think my sister was a little nervous, but it turned out okay. JC: Next question: is this the most Saskatchewan photo of all-time? KS: [laughs] It seems like anytime anyone does something different that’s from Saskatchewan, people blame it on that, but yeah, in this case, I think it’s pretty Saskatchewan. 7. And now keeping with the Instagram theme, I have a video here that appears to show you and some of your family members doing a Backstreet Boys choreographed routine at Christmas (https://www.instagram.com/p/iPvtMlEGeS/?taken-by=_arieljade). Is, uhh, that what is happening here? 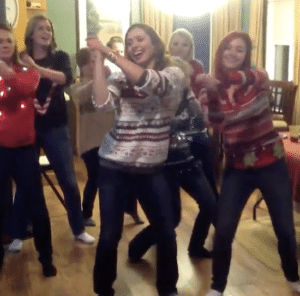 KS: What’s even worse is that I don’t know which video you are talking about. We have done multiple choreographed routines. [laughs] Okay, yeah, I remember this one. I have a lot of cousins, so every year at Christmas, it’s a gong show when we get together. The theme that year was ugly sweaters. So anyway, the drinks got flowing a bit and then we decided we were going to perform for all the aunts and uncles. Two hours later… JC: [laughs] You spent two hours of your family Christmas party choreographing a dance to the Backstreet Boys? KS: At least. [laughs] It was pretty entertaining. Some of the guy cousins even thought to join, and then when they came out to the garage, they saw what we were doing for about five minutes and then they were like, “nah”. We were really serious about it. But it was a good time. Even our parents have gotten into it some years. Like I said, Streifel Christmas is a gong show. [laughs] 8. Fantastic. And now comes the last question from Colin Hodgson, and I think he’s setting you up here a little bit, but we’ll see. He asks, who is your favorite cook on tour and why do you love him so much? KS: Okay, yeah, wow. Well, I guess my favorite cook on tour is COLIN HODGSON. [laughs] No, he is great. We’ve played in some fun spiels together, and he’s just a social guy that’s fun to be around. His hair though? Not great. JC: [laughs] Right, it’s terrible. Thank you for at least knocking him down a peg with this question that was clearly designed to get compliments. KS: My brother, when he was younger, he used to get Pokémon shaved into his head. My Mom would ask him what type of Pokémon he wanted, and he would get that done. Colin’s hair reminds me of that. JC: [laughs] YES! Amazing. And lastly, can I have a question for my next interviewee, who will actually be your Team Canada teammate, Tyler Tardi. KS: Okay, sure. If Hollywood was doing a movie on his life, who would he want to play the lead role, and why? And also ask who would play his team members. I’m looking forward to getting to know them in Korea. JC: Awesome, thanks Kristen. Best of luck in Korea and bring that gold home for Canada! As always, you can follow John on Twitter at @cullenthecurler and you can follow Kristen Streifel at @k_streif.