Canada’s two junior champions hit the ice at the 2017 World Junior Curling Championships today at the Gangneung Curling Centre in Gangneung, South Korea, where Tyler Tardi kicked off with a win in the men’s one game of the day, and Kristen Streifel split her two matches, coming up just short in an 8-7 loss to Sweden. 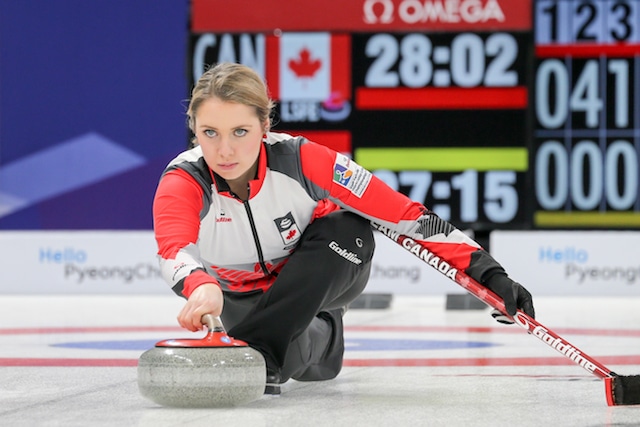 Streifel and her Edmonton-based team of vice-skip Chantele Broderson, second Kate Goodhelpsen, lead Brenna Bilassy, alternate Karlee Burgess and coach Amanda Dawn St. Laurent were in total control against Hungary’s Bernadette Biro, taking an 8-1 win in the women’s opening draw. “That was a good game to get under our belts early,” said Streifel about the relatively easy start to the competition. “We went out there pretty calm, like we do every other game, and just tried to get the hang of the ice and it worked well.” The game against Sweden’s Isabella Wranaa was more of a battle. Canada stole four points in the first two ends and led 5-2 after four. But a missed double takeout by Streifel gave Wranaa a chance to draw for four and take control. Tied 7-7 without hammer in the tenth, and with Canada’s steal point lying top button, Streifel saw her guard just over-curl, leaving Wranaa a hit for the win. In a high-scoring game in the men’s opening draw, Tyler Tardi’s B.C. team from Langley/New Westminster (vice-skip Sterling Middleton, second Jordan Tardi, lead Nick Meister, alternate Nicholas Rabl, coach Paul Tardi) scored a 12-8 win over Sweden’s John Nygren, stealing two in the final end when Nygren’s final double attempt missed. “It’s always nice to start with a win,” said Tardi. “We were just getting used to the ice for the first bit, we weren’t too concerned with winning or losing. I think we accomplished that goal and are feeling happy with how we did.” 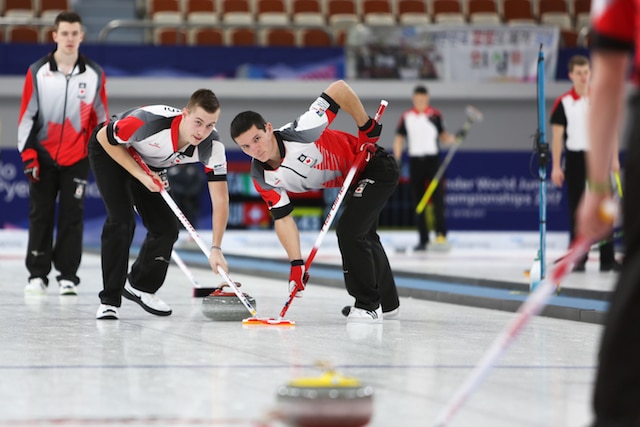 The game may not have been the team’s sharpest, but Tardi said that doesn’t worry him. “Not nerves, we just weren’t playing too sharp,” he said. “I think we are completely fine on nerves, we haven’t ever had an issue with that. Just trying to play sharp and get used to the jet lag.” Streifel and company are hoping to repeat the gold-medal success of last year’s Team Canada women, led by Nova Scotia’s Mary Fay – a team that included current fifth player, Burgess. “I don’t know how to describe the feeling (of wearing the Maple Leaf),” the Edmonton skip said. “It’s definitely a dream come true.  It’s starting to feel a bit more real now that we’re wearing the jackets.  We’re really proud and will try to do the best we can.” “It’s been a great experience so far – we’re loving Korea,” she added. “The people here are really nice and the facility is unreal, really cool.” On Friday, the women have one game, against Switzerland’s Selina Witschonke (Thursday 7 p.m. EST), while the men will face South Korea’s Ki Jeong Lee (12 a.m. EST) and China’s Zhi Yu Wang (5 a.m. EST). Event information, including news and live scoring, are available at the event website, www.worldcurling.org/wjcc2017 As well, selected games will be streamed live on the World Curling Federation’s Youtube channel, www.youtube.com/WorldCurlingTV