Halfway through the round robin at the 2017 World Junior Curling Championships in Gangneung, South Korea, Team Canada’s Tyler Tardi and Kristen Streifel are keeping themselves in position for playoffs. 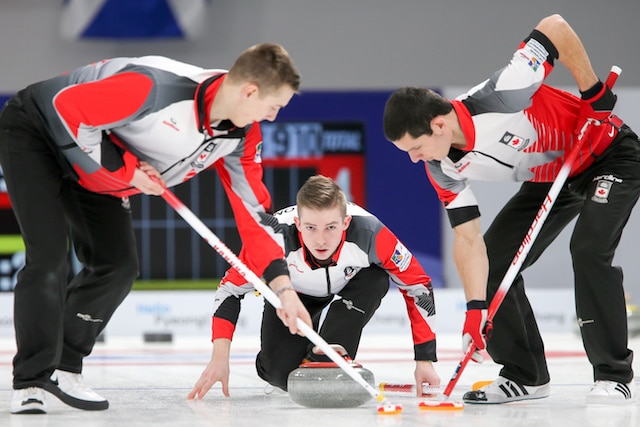 Tardi and his B.C. team from Langley/New Westminster (vice-skip Sterling Middleton, second Jordan Tardi, lead Nick Meister, alternate Nicholas Rabl, coach Paul Tardi) split their two games on Sunday to move into third place in the men’s standings. In the morning game, Canada was fast out of the blocks against Italy’s Marco Onnis, racking up a 7-2 lead after four ends and they kept the pressure on until handshakes after six ends. “We just wanted to keep our energy up and play as well as we have been,” said Tardi after a relatively easy 9-2 win. “I think we achieved that goal for the most part. It’s kind of tough to keep your focus up for the game. I’m proud of the guys.” But against the USA’s Andrew Stopera on Sunday evening, the Canadians just couldn’t get any offence going. They gave up a steal of one in the fourth when Tardi’s final draw came up short, and trailed 3-2 at the break. Another steal by the Americans in nine put the game out of reach. “It was mostly me not making the key shots when I had to,” said Tardi, taking responsibility for the 6-2 loss. “We set it up nice, but I just didn’t finish it off. That’s really what it came down to. (We just need to) work out the kinks we had. I thought the guys played great, I just couldn’t make the key shots, so if I start making those then I think we’ll be set and ready to go.” At the halfway point in the men’s round robin, the Canada and USA are tied in third place, behind South Korea and Norway, so the battle for playoff positions continues. On the women’s side, Kristen Streifel and her Edmonton-based team of vice-skip Chantele Broderson, second Kate Goodhelpsen, lead Brenna Bilassy, alternate Karlee Burgess and coach Amanda Dawn St. Laurent battled their way to a 7-4 win over South Korea’s Min Ji Kim to move into a three-way tie for first place with Scotland and Sweden. Canada led 6-4 heading into the tenth without hammer and needed some big shots from the skip to prevent the South Koreans from forcing the extra end. 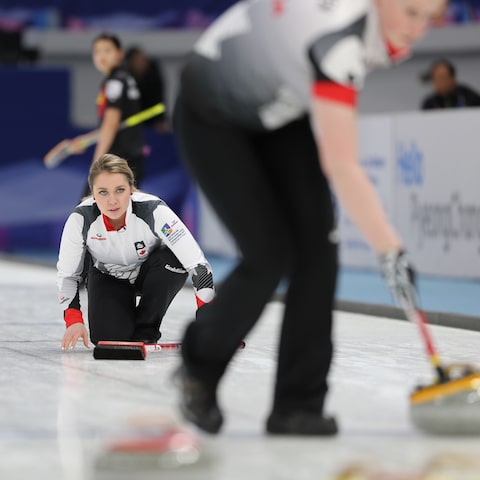 “Before (the last stone was played) I just knew if we could manage that shot really well we would leave ourselves in a really great position and make them have to make a tough shot for the win,” said Streifel. “And, after (when they missed the take-out) it was a good feeling. (Going forward), I think we just need to take advantage of the momentum on our side right now and try to carry that through into each game and keep building.” The round robin continues on Monday with both teams playing just one game. Streifel faces Russia’s Maria Baksheeva (5 a.m. EST) and Tardi will play Norway’s Magnus Ramsfjell (12 a.m. EST). Event information, including news and live scoring, are available at the event website, www.worldcurling.org/wjcc2017 As well, selected games will be streamed live on the World Curling Federation’s Youtube channel, www.youtube.com/WorldCurlingTV