Northern Ontario bounces back with victory at Tim Hortons Brier 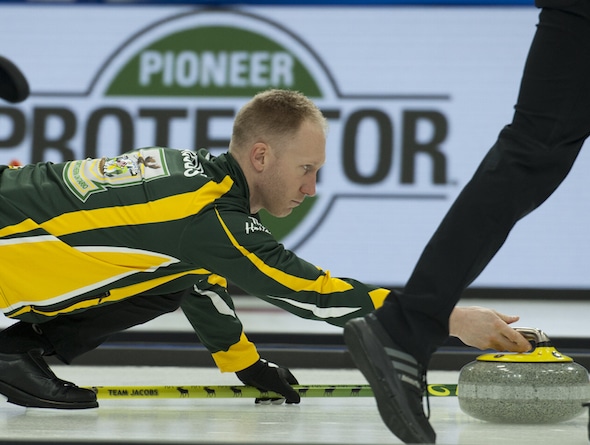 So it’s been with Brad Jacobs’ Northern Ontario team from Sault Ste. Marie. Jacobs, vice-skip Ryan Fry, second E.J. Harnden, lead Ryan Harnden, alternate Lee Toner and coach Caleb Flaxey were part of two of the most emotionally charged games of the week at the 2017 Tim Hortons Brier, and ended up losing both — to Newfoundland-Labrador’s Brad Gushue on Tuesday night, and to Manitoba’s Mike McEwen on Wednesday afternoon.

But both times, Northern Ontario was able to put the loss firmly in the rear-view mirror and come back with a solid victory.

The win lifted Northern Ontario’s record to 7-3 and put them within striking distance of a playoff position.

“We don’t like to lose, and it makes you feel a lot better after taking a big loss if you can come out and play well and win,” said Jacobs, the 2013 Tim Hortons Brier and 2014 Olympic champion, who noted the recovery process from the losses was pretty simple. “We had a couple beers; the same thing we did after the loss to Gushue. Just have a couple of beers and forget about it.”

Particularly notable on Thursday, suggested Jacobs, was the performance of Fry, who struggled against Manitoba but rallied nicely against Saskatchewan.

“I’m really proud of the way Fry played today; he was very unhappy with himself after yesterday’s game,” said Jacobs. “I said to him during the (loss to Manitoba), ‘I don’t know what you did to tick off the curling gods.’ Everything he was doing for some reason was not going his way. But he came out today and he was making everything. He really set us up well; we got a lot of deuces because of his shots.”

“Being 6-and-3 coming into today, we knew we control our own destiny,” said Jacobs. “ We know if we go 8-and-3, we make the playoffs. So the goal today was just to come out in both games, play the best we can, and hopefully we can squeak in there.”

Action at the 2017 Tim Hortons Brier continues on Thursday, with draws scheduled for 3 p.m. and 8 p.m. (all times NST).