EDMONTON – Sweden’s Niklas Edin can join Canada’s Brad Gushue in the 1-2 Page Playoff game Friday night with a win in one of his two games Thursday at the 2017 Ford World Men’s Curling Championship. 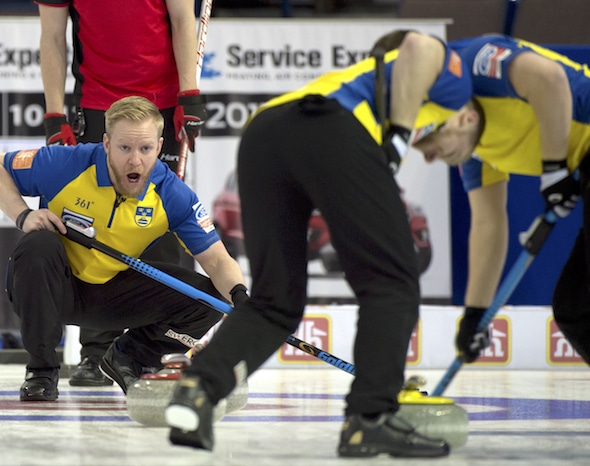 Sweden is alone in second place with an 8-1 record following a pair of wins over strong teams Wednesday. In the morning draw, Sweden defeated David Murdoch of Scotland 6-4, and then followed up Wednesday night by striking for five in the seventh end for a 10-4 victory over Switzerland’s Peter de Cruz. The Swiss enter the final day of round-robin play in third at 7-2. The United States is fourth at 6-3 after John Shuster’s squad beat Rui Liu of China 8-2 in seven ends Wednesday evening.

Edin, third Oskar Eriksson, second Rasmus Wranå, lead Christoffer Sundgren, alternate Henrik Leek and coaches Peja Lindholm and Fredrik Lindberg will face Shuster and the Netherlands (1-8) skipped by Jaap van Dorp on Thursday. “That was the game to win, so to speak,” said Edin about winning the showdown for second place. “That was huge. We still have some things to work on before the playoffs. Now we get a little room to breathe and think about how we want to play the next couple of games – less pressure and we can start focusing more on how we want to go into the playoffs. “Now is about the time we need to step it up. I think we did that against Scotland and Switzerland so I think we’re on our way to  play better curling. “Gushue is for sure the team to beat here; we still need to up our game to have a chance against them.” Gushue, third Mark Nichols, second Brett Gallant, lead Geoff Walker, alternate Tom Sallows, team coach Jules Owchar and national coach Rick Lang can clinch first place by winning either of Canada’s games, against Italy or Norway on Thursday. One win on Thursday will also assure de Cruz’s crew of third place and hammer in the 3-4 Page Playoff game on Saturday at 2 p.m.. But de Cruz, fourth-rock thrower Benoît Schwarz, third Claudo Pätz, lead Valentin Tanner, alternate Romano Meier and coach Claudio Pescia will need a better showing against Japan and China on Thursday if they hope to reach their playoff goal. “We didn’t understand the ice and the rocks. We weren’t able to match the rocks well and we didn’t really know how far out to throw it to get it where we needed to be,” said de Cruz. Shuster’s squad, meanwhile, improved its playoff chances immensely with its triumph over China. “Huge win. Any time you can go out and get a win against a team that’s fighting for their playoff lives too is a huge win,” said Shuster, who in addition to playing Sweden in the afternoon will take on the Netherlands Thursday morning. “We have one game clear right now of (fifth-place) Japan (5-4), and every win now is critical.”

The Superior, Wis., resident likes the way his squad has been playing as the week’s gone on. “We got a great feel for the ice right off the bat (Wednesday),” Shuster said. “(Third Tyler George has) been throwing the rock awesome and giving me some easy shots for extra points, and that’s always a good thing when your team is doing that for you. “Our team (second Matt Hamilton, lead John Landsteiner, alternate Joe Polo and coach Phill Drobnick) always gets better as the ice gets better, and the ice is exactly where I’m sure (event icemaker Jamie Bourassa) wants it right now. The better the ice is, the better our team is.” In other action, Murdoch and Steffen Walstad of Norway joined China and Italy behind Japan’s Yusuke Morozumi at 4-5. Murdoch’s Scottish squad downed Joel Retornaz of Italy 6-2 while Walstad needed an extra end to edge Germany’s Alexander Baumann, who falls to 2-7. Canada, Japan, Netherlands and Russia (Alexey Timofeev, 0-9) did not play in Draw 14. The Ford Worlds continue Thursday with draws at 9 a.m., 2 p.m., and 7 p.m. (MT) For ticket and other event information, visit httphttps://www.curling.ca/2017worldmen/ This story will be posted in French as soon as possible at https://www.curling.ca/2017worldmen/?lang=fr TSN (RDS2 in French), the exclusive television network for Curling Canada’s Season of Champions, will provide complete coverage of the 2017 Ford Worlds.