It was a memorable day for Team Canada on Saturday at the World Senior Curling Championships. 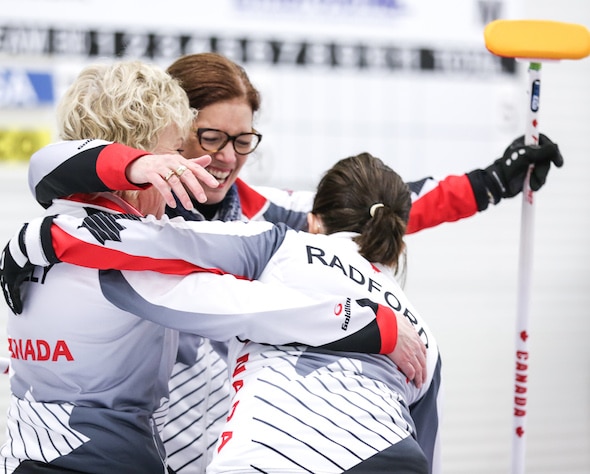 Then, Ottawa’s Bryan Cochrane pushed reigning world champ Mats Wranå of Sweden to the very limit before bowing 5-4 in an extra end when Wranå made a cold draw to the four-foot looking at two Canadian counters.

Jones, a six-time winner of the Scotties Tournament of Hearts and a two-time world women’s champ, was wearing the Maple Leaf for the first time since she won gold at the 2004 Ford World Championships in Sweden.

Thirteen years later, the sensation of winning a world title at the senior level was just as special, she said.

“Winning is winning. Whenever you win something this big, the euphoria is the exact same,” she said. “If you could bottle it, you’d be a multi-millionaire, and you want to hold onto that feeling forever. Winning at this age maybe sweeter than when I won as a 21-year-old or a 39-year-old because your body’s aging, there’s a lot more work that goes into maintaining your ability and talent at this age. You have to keep improving your game.”

The Canadian team, which carried a perfect 8-0 record into the gold-medal game, took control early and never let go. 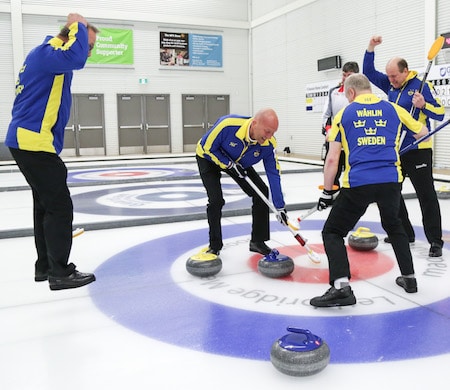 Switzerland managed to get three back in the fourth, but Jones drew for three more in the fifth, stole another in the sixth, and the gloves came off after Switzerland scored one in the seventh and conceded.

“It feels really sweet, to have finished it and to win a world championship — it was such a thrill,” said Jones. “Last night, going to sleep, we had that same kind of nervous ball of energy. Kim and I woke up and we said to each other, did you get any sleep? Not much, but it was enough. It just felt really good.”

So good, in fact, that Jones says she isn’t done chasing national and world championships with her team.

“I think I have a lot left in my tank,” she said with a smile. “I have to talk to the girls to see how much is left in their tanks, but I think they embrace the challenge to get better as much as I do. I think they’re renewed and re-energized. I it’s a wonderful goal to have at any age, and especially our age.”

Cochrane, vice-skip Ian MacAulay, second Doug Johnston, lead Ken Sullivan, alternate Howard Rajala and coach Bill Tschirhart, meanwhile, had a slow start against the Swedes, falling behind 3-0 after five ends. Sweden scored one with the hammer in the first, and then stole points in the fourth and fifth ends on Cochrane misses. 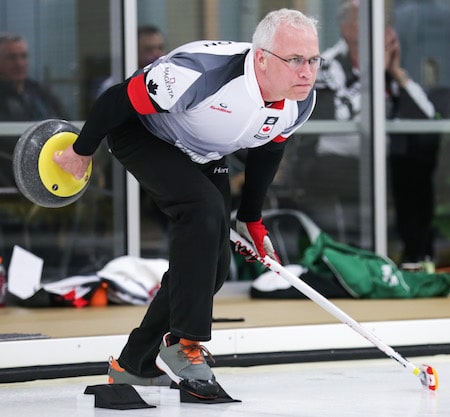 Canada had a shot at a deuce in the fourth; sitting one, Cochrane attempted an angle-raise takeout but was just inside and ended up jamming, leaving a Swedish stone as shot. In the fifth, Cochrane was just heavy on his draw to the four-foot.

But Canada rallied to tie the game with deuces in the sixth and eighth ends, sandwiched around a Swedish single.

In the extra, Canada had rocks lined up at the back four-foot and top eight, forcing Wranå to the draw. But the Swede made no mistake.

“It wasn’t our best game, but I’m proud of the way we fought back and made their skip make a really good shot,” said Cochrane. “Those guys are good curlers; they won (gold) last year, and it was a fun game in the end. I’m proud of our team; we curled well all week. No shame.”

Nor should there be. The Canadians entered the gold-medal game unbeaten, and went home with a silver medal, and wore the Maple Leaf with class and pride.

“At the age of 59, wearing a Team Canada uniform for the first time, it’s a very proud moment for all of us,” said Cochrane. “When we got here, we had the jitters — we wanted to make sure we put on a good show. And we did — we played really well all week. I wish we would have played a little better today, but that’s what happens in this game. We’re proud of how we performed.”