Most Canadian curling fans will tell you that Team Brad Gushue is the best in the world right now. 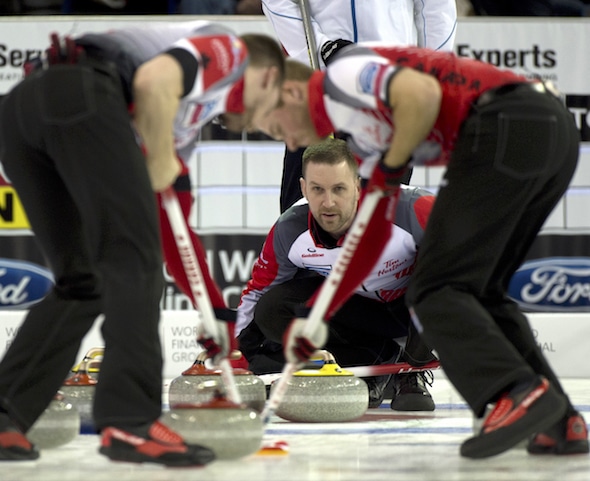 It’s hard to argue that considering Gushue’s St. John’s team is the reigning Tim Hortons Brier and world champion, and it won the first Grand Slam of Curling event of the season this past weekend in Regina. And Gushue, vice-skip Mark Nichols, second Brett Gallant and lead Geoff Walker usually make it look pretty easy.

It comes as a surprise, then, when one looks at the World Curling Tour rankings and doesn’t see Team Gushue at the top of the leaderboard; in fact, the team sits in second place, behind Sweden’s Niklas Edin.

Now, there’s no arguing that Edin’s record is equally impressive. He won three Grand Slams last season, claimed gold at the European championships,  finished second to Gushue at the Ford World Men’s Championship, and won the Baden Masters bonspiel in Switzerland to start this season. Based on the complicated formula that calculates Order of Merit points, Edin has the slight edge for the top spot … for now.

Both Edin and Gushue are in Cornwall, Ont., this weekend for the AMJ Campbell Shorty Jenkins Classic. The bonspiel, named for the legendary icemaker, boasts a star studded field beyond the top two, including No. 3 Brad Jacobs (Sault Ste. Marie, Ont.), No. 4 Reid Carruthers (Winnipeg), No. 6 John Epping (Toronto), No. 7 Mike McEwen (Winnipeg), No. 8 Kyle Smith (Scotland) and No. 10 Peter de Cruz (Switzerland).

Of the top 10 teams on the WCT rankings, only Kevin Koe (Calgary) and Steve Laycock (Saskatoon) are sitting this one out.

On the women’s side, the battle for WCT rankings is just as intense. While Ottawa’s Rachel Homan is still in the top spot, they failed to qualify at the GSOC Tour Challenge, while Anna Hasselborg (Sweden), Silvana Tirinzoni (Switzerland), and Jennifer Jones (Winnipeg) all picked up substantial points.

Currently, the top four places are only separated by less than 30 points, which can certainly be earned in a weekend. With Homan and Jones taking the weekend off, the door is open for Hasselborg and Tirinzoni to make a move by scoring big at the Shorty. Alli Flaxey (No. 7; Caledon, Ont.) is the only other top 10 team in the 16-team women’s field.

Also on tap this weekend is a men’s and women’s event, the King Cash Spiel in Maple Ridge, B.C.