Another win for Canada at World Mixed

Team Canada notched a 5-3 win over Poland on Sunday morning to remain undefeated at the 2017 World Mixed Curling Championship in Champéry, Switzerland. 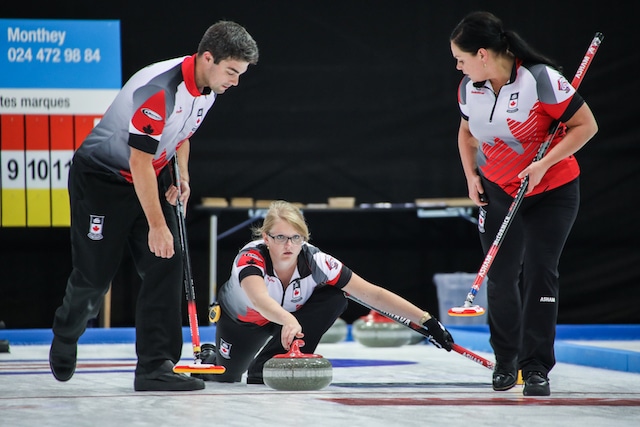 In a close contest against Poland’s Andrzej Augustyniak, Trevor Bonot and his Thunder Bay foursome – vice-skip Jackie McCormick, second Kory Carr, lead Megan Carr and coach Jim Waite – stole a single in the fourth end to take a 4-2 lead into the break. Augustyniak blanked the fifth but was only able to score a single in six. Canada controlled the scoreboard, blanking the seventh and taking a single in eight for the 5-3 win. Canada now sits at the top of the leaderboard in Group E with a 2-0 record. Bonot will take on England’s Andrew Woolston on Monday (2 am. ET). Fans can follow the live scoring at www.worldcurling.org/wmxcc2017/livescores. The 38 teams in Champéry are split into five pools, with the top three finishers in each pool, plus the fourth-place team with the best Draw-Shot Challenge total, advancing to the 16-team, single-knockout playoffs. The playoffs begin on Friday, Oct. 13, with the semifinals and gold- and bronze-medal games slated for Saturday, Oct. 14. Selected playoff games, including the gold-medal game, will be streamed live on the World Curling Federation’s YouTube channel, www.youtube.com/user/WorldCurlingTV For the event schedule, live results, teams and news visit www.worldcurling.org/wmxcc2017 Team Canada updates will be available at curling.ca.