“We haven’t hit our stride quite yet, but we’ve made the right shots at the right time” said Team Canada skip Trevor Bonot after stealing the final end on the way to a 6-5 win over England’s Andrew Woolston on Monday morning at the World Mixed Curling Championship in Champéry, Switzerland. 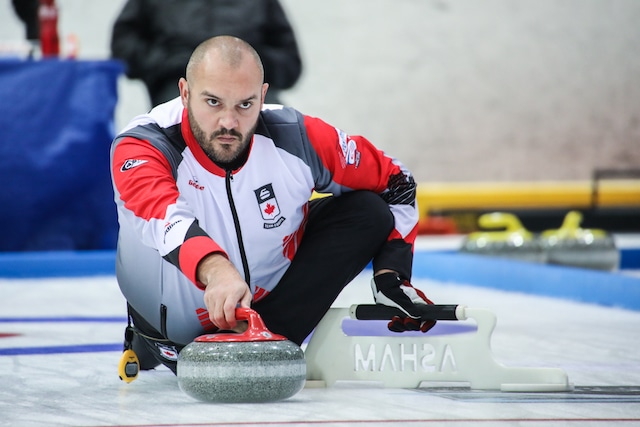 “It was definitely ugly for us out there again,” admitted Bonot, backed by vice-skip Jackie McCormick, second Kory Carr, lead Megan Carr and coach Jim Waite. Canada had a 4-2 lead at the break but gave up two consecutive steals to fall behind. They tied the game in the seventh, then stole a single in eight for the 6-5 win. “It was really important to get that win this morning,” said Bonot, who remains undefeated in the round robin and sits at the top of the Group E standings with a 3-0 record. “You don’t want to get behind at all, it just makes the rest of the games tougher and more stressful. We all agree there’s lots of room for improvement and we’re nowhere near where we want to be, so we’ve got some work to do.” Canada has two games on Tuesday, starting off against Australia’s Hugh Milliken (6 a.m. ET), who is a former Canadian Mixed champion; he captured gold at the 1986 event in Kamloops, B.C., playing second for Ontario’s Dave Van Dine. In the evening, Team Canada faces the Netherlands’ Danny Van Den Berg (2 p.m. ET). Fans can follow the live scoring at www.worldcurling.org/wmxcc2017/livescores The 38 teams in Champéry are split into five pools, with the top three finishers in each pool, plus the fourth-place team with the best Draw-Shot Challenge total, advancing to the 16-team, single-knockout playoffs. The playoffs begin on Friday, Oct. 13, with the semifinals and gold- and bronze-medal games slated for Saturday, Oct. 14. Selected playoff games, including the gold-medal game, will be streamed live on the World Curling Federation’s YouTube channel, www.youtube.com/user/WorldCurlingTV For the event schedule, live results, teams and news visit www.worldcurling.org/wmxcc2017 Team Canada updates will be available at curling.ca.