SUMMERSIDE, P.E.I. — As the old saying goes, they don’t ask how, they just ask how many; Charley Thomas has two wins at the 2017 Home Hardware Road to the Roar Pre-Trials, and that’s all that really matters. 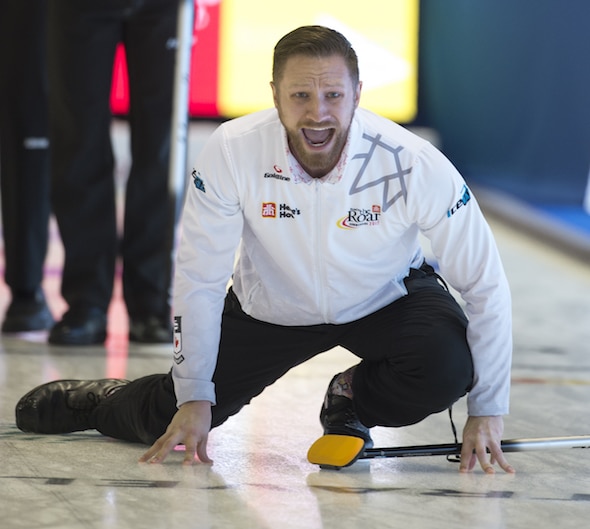 Charley Thomas and his Edmonton team took an unconventional path to a 2-0 record at the 2017 Home Hardware Road to the Roar. (Photo, Curling Canada/Michael Burns)

But how he and his Edmonton team — third Mick Lizmore, second Brandon Klassen and lead D.J. Kidby — got those two wins on Tuesday at Credit Union Place was unusual, to say the least.

In both cases, Thomas’s opposing skip — Winnipeg’s William Lyburn in the morning draw and then Dayna Deruelle of Brampton, Ont. in the afternoon draw — had hogline violations on their final deliveries of the game, leading directly to victories for Team Thomas: 6-5 over Lyburn and 8-7 over Deruelle.

“We know that we’re going to have to get a little lucky this week to win; I mean, any team will probably tell you that,” admitted Thomas. “So we’ll take the breaks where we can get them. Obviously, we don’t want to win on something like that, but a win is a win.”

Earlier in the day, Lyburn was attempting to block a Thomas bid for a winning deuce in the 10th end, and had a number of options to do it with his final stone, but those options went out the window when the red light started flashing, giving Thomas the draw for the winning pair.

Against Deruelle, Thomas and Co. had fought back to tie the game with three in the ninth end, and Thomas made a terrific shot with his last, a triple-takeout that left him shot, buried, in the top eight-foot. But Deruelle needed to simply replicate the shot he made on his first, an inturn draw to the four-foot. But the red light came on and the gloves came off for post-game handshakes.

“He essentially just made the same shot, so he’s going to make that again 99 times out of 100,” admitted Thomas. “You have to feel bad for him.”

Those are the breaks of the game, of course, but Thomas has hardly been a player who thrives on the other team’s gift-wrapped misses; he’s a two-time world junior champion — only fellow Canadians John Morris and Kelsey Rocque can make that claim — who also is one of the world’s top mixed doubles players, and the rest of his team has championship pedigree as well, despite a rocky start to the season heading into the Pre-Trials.

“We had a pretty mediocre start to our season, we haven’t qualified (for the playoffs) in any ’spiels, but we know where we stack up with these guys, and we know we can compete with and beat anyone,” said Thomas, 31. “So that’s what matters to us.”

The ninth-end rally to leave the teams tied going to the 10th came just after Deruelle had taken a three-point lead with an eighth-end deuce.

“We met just before that end started and said, ‘Let’s just get our two and it’s anyone’s game,’ ” said Thomas. “I mean, it’s high pressure out there. Even down one coming home, you never know. You get two rocks in the rings and you never know what can happen.”