SUMMERSIDE, P.E.I. — It’s been a roller-coaster ride so far for Adam Casey and his Regina-based team at the 2017 Home Hardware Road to the Roar Pre-Trials, so naturally, there was nothing routine about the start of his game Thursday afternoon against John Morris of Vernon, B.C. 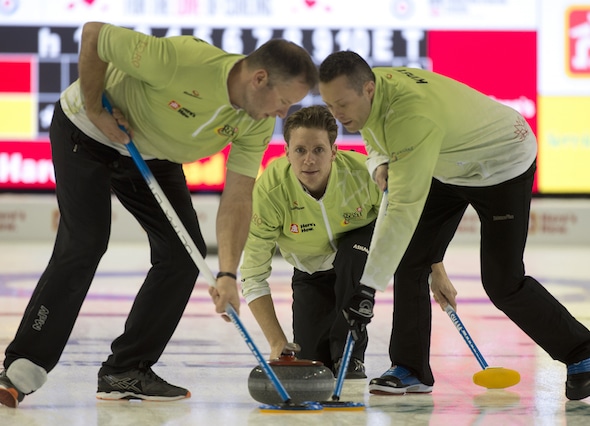 Casey, who grew up just minutes away from Credit Union Place in Seven Mile Bay, and now calls Charlottetown home, entered the game with a 1-2 record, teetering on the brink of elimination from playoff contention, and immediately surrendered a three-ender to Team Morris.

Not, it goes without saying, the most ideal start.

“Well, it could have been four,” said Casey with a laugh. “But it was frustrating. I just really got after the guys; I wanted us all to bear down. We’re staring at defeat; it hasn’t been a good week, but we just can’t quit. I look at this as my home rink, and there’s no way we’re bowing down easy. We’re going to fight until the end, no matter what we have to do.”

Which sums up neatly the ensuring nine ends, as Casey, vice-skip Brock Montgomery, second Shaun Meachem and lead Dustin Kidby rallied for a 9-8 victory that left both teams with 2-2 record, part of a four-way deadlock for second place in Pool A with Saskatoon’s Colton Flasch and Winnipeg’s Jason Gunnlaugson — all of whom trail the leader Glenn Howard of Etobicoke, Ont., at 4-0.

“I’m really happy with the way the guys battled after giving up three in that first end,” said Casey, who will complete round-robin play on Friday with games against Howard and Gunnlaugson. “So we’re in position now, we just have to win those last two.”

Casey got back into the game with deuces in the second and fourth ends, and a crushing three in the sixth. Morris managed to tie it 9-9 with a steal of two in the ninth when Casey was heavy with his last-rock draw, but the winning point was scored in the 10th without Casey having to throw as Team Morris last-rock thrower Jim Cotter was light on his draw.

With Casey the lone Islander in the field of 14 men’s and 14 women’s teams, one might think he’s feeling added pressure to entertain, as his face has been prominent in ticket-selling campaigns on the Island.

“No, these are my people, my family, my best friends — if anything, it’s a comfort factor,” insisted Casey. “You’re most comfortable, you’re most honest around your family and friends. I don’t need to try to be anybody I’m not; I can be exactly who I want to be, and they’re going to love me or hate me just the same as they did before the event.”

In other Thursday afternoon action, Howard kept his perfect record intact with an entertaining 8-5 win over Gunnlaugson. The toe-sliding Manitoban had a chance to win the game in the 10th end, as he had a double-takeout to remove to Howard counters and score two. But he was just wide with his shot and didn’t make contact, giving the stolen deuce to Howard.

A double-takeout for the win for @TeamJGunns but it’s wide of the mark and it’s a stolen deuce and an 8-5 win for @TeamGlennHoward! #curling #RTTR2017 pic.twitter.com/85yOJRstkC

Brendan Bottcher just needs full eight-foot for the win. No problem at all! 5-4 win for @TeamBottcher over @TheCurlingFirm. #curling #RTTR2017 pic.twitter.com/9JRrafA4yG