OTTAWA – Reid Carruthers has been fighting a cold but he showed he’s in fighting form in his drive to make the playoffs at the 2017 Tim Hortons Roar of the Rings. 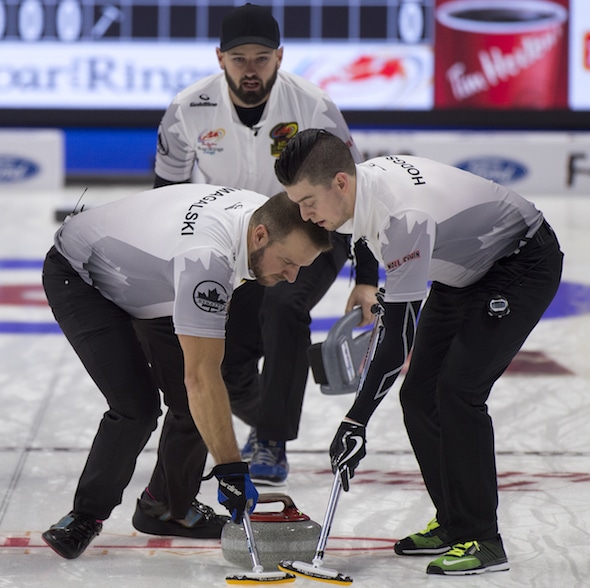 Carruthers calmly drew the button with his final shot in the 10th end to defeat John Epping of Toronto 7-5 Tuesday morning. That evened his Winnipeg squad’s round-robin record at 2-2 while Epping dropped to 1-3. “Still not feeling great, per se, I’m still trying to battle this cold so, I’m not shaking hands with the other guys,” said Carruthers. “We’re trying to get a little momentum but we’re still not firing, I guess, on all cylinders. We had a couple of breaks early in that game and managed to close it out, but it was maybe a little sloppy.” Victory was key to both teams in order to keep the leaders in sight as they chase the coveted Canadian spot at the Olympic curling competition at Pyeongchang, Korea in February. Carruthers, third Braeden Moskowy, second Derek Samagalski, lead Colin Hodgson, alternate Craig Savill and coach Dan Carey play world champion and 2006 Olympic gold medallist Brad Gushue (2-2) tonight. “The way I see it, if we get to five and three, or six and two it’ll give us a shot,” said Carruthers. “To be honest, I’m trying not too much to look at the standings. If we play well and win and play well and lose, as long as we put a solid performance out there sometimes it’s in the cards for you to win and sometimes it isn’t, so I can’t focus to much on the wins and losses. “If it works out at the end of the week the way we started, then great. If we’re not in the playoffs then yeah, it sucks. We play tonight, and if we win that one we’re three and two and in a pretty good position in my opinion.” It was a carefully played game with three blank ends in the first four. Carruthers scored two in the first end, stole another in the fifth before Epping hit the scoreboard with a deuce in six. But that was unceremoniously erased an end later when Carruthers made a soft takeout to score three for a 6-2 lead. But Epping executed a soft takeout of his own to score two in the eighth to keep within range at 6-4. In the only other game on the morning draw, Calgary’s Chelsea Carey moved into a first-place tie in the women’s standings with Winnipeg’s Jennifer Jones at 4-0 after defeating Allison Flaxey of Toronto 9-3 in eight ends.

Carey scored two in the first end and just kept on rolling. Carey, third Cathy Overton-Clapham, second Jocelyn Peterman, lead Laine Peters and coach Helen Radford, jumped out to a 7-1 advantage by the fifth-end break. “We didn’t expect that one to be as easy as it was,” said Carey. “They’re a better team than that, but we’ll take it, because we’ve had a couple of close nail biters that have been hard on the nerves. Nice to have one that was a little easier.” While Jones and Ottawa’s Rachel Homan were the pre-event favourites, Carey’s 2016 Scotties Tournament of Heart champions were considered at the next level. Beating Homan in the first draw got them off to a strong start and they’ve kept on rolling. “We knew certainly we were capable of that,” said Carey. “We knew it was a tough field, but we came into it in a good spot, the focus wasn’t on us, which was great. We just went about our business, stayed calm, stayed kind of together as a team, learned from our misses and kept getting better and better.” Her victory sets up a first-place showdown with Jones in Wednesday’s afternoon draw. Jones plays Casey Scheidegger of Lethbridge (2-1) tonight. “We don’t change anything. That paper bag theory kind of a situation, you know they’re going to make a lot of shots and if you win or lose that game it’s not the end of the world, we’re just going to try and come out and get better with every game like we’ve been trying to do. We look at it as the whole week and not who we’re playing,” said Carey. The 2017 Tim Hortons Roar of the Rings continues with draws today at 2 p.m. and 7 p.m. (all times EST). Live scoring, standings and statistics for the 2017 Tim Hortons Roar of the Rings are available at www.curling.ca/scoreboard/ TSN/TSN2 and RDS2 will provide complete coverage of the Tim Hortons Roar of the Rings. CLICK HERE for the complete schedule For ticket information for the 2017 Tim Hortons Roar of the Rings, CLICK HERE. This story will be posted in French as soon as possible at www.curling.ca/2017roaroftherings/?lang=fr