Mike McEwen of Winnipeg cracked open a tight game with four points in the sixth end and went on to 10-4, eight-end win over Steve Laycock of Saskatoon, improving his team’s record to 4-1 Wednesday morning at the Tim Hortons Roar of the Rings. 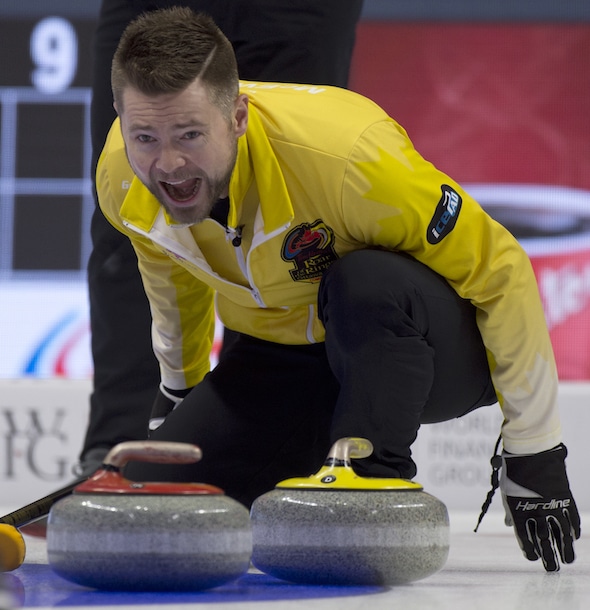 In the only other morning game Val Sweeting of Edmonton (3-3) kept alive her team’s hopes of making the weekend playoffs with an impressive 8-6 win over Casey Scheidegger of Lethbridge, Alta., (2-3). McEwen and third B.J. Neufeld, second Matt Wozniak, lead Denni Neufeld and coach Chris Neufeld, from the Fort Rouge Curling Club, were locked in an interesting battle with Laycock, now 2-4, with the teams trading deuces in the second, third and fourth ends and singles in the first and fifth that left McEwen up 5-3. But the Winnipeg foursome jumped all over a couple of costly misses by the Saskatchewan crew to set the end in the sixth for McEwen’s last-rock hit-and-stick for the game-changing four. “It made it more relaxing,” McEwen said of the turn of events. “We had burnt a bit of time in the first half so that made it a pretty routine shot-selection from that point on. It gave the brain a bit of a break.” Matt Dunstone, who throws fourth stones for the Laycock team, said he had trouble adjusting to the changing ice conditions.

“You lose about a second off draw weight right after the practice, which is tough, but that’s part of the game,” the 22-year-old said. “Adapting to ice conditions is what the game’s all about. Me personally, I haven’t done a good job of that. The guys have picked up on it a bit quicker, but I’ve struggled to find that draw weight.” Sweeting and Scheidegger were tied 5-5 at the break but Sweeting got two in the seventh and then made a perfect double-raise takeout in the 10th to run Scheidegger out of rocks to secure the critical win. “We still have some work to do and we need some help, but we’re doing what we need to do out there and that’s all we can ask for,” said Sweeting, who began the week losing her first three games. “It was tough looking at 0-3, but we knew we were still in it.” The key Wednesday morning, she said, was getting the team back to doing what it normally does. “Things that we normally do that make us a good team, getting rocks in a good spot, figuring out what the ice is doing, and the girls had some really good sweeps out there and we had really good (rock) placement.” The 2017 Tim Hortons Roar of the Rings continues with draws Wednesday at 2 p.m. and 7 p.m. (all times EST). Live scoring, standings and statistics for the 2017 Tim Hortons Roar of the Rings are available at www.curling.ca/scoreboard/ TSN/TSN2 and RDS2 will provide complete coverage of the Tim Hortons Roar of the Rings. CLICK HERE for the complete schedule For ticket information for the 2017 Tim Hortons Roar of the Rings, CLICK HERE. This story will be posted in French as soon as possible at www.curling.ca/2017roaroftherings/?lang=fr