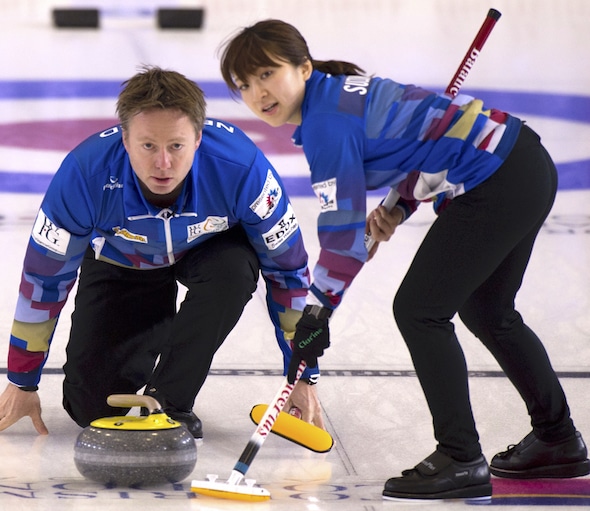 The seventh end was the downfall for Team North America. Manuela Siegrist and Benoît Schwarz (who had replaced Marlene Albrecht and Peter De Cruz) scored two in the seventh for a 7-5 World victory while Yumi Suzuki and Torger Nergård (replacements for Agnes Knochenhauer and Rasmus Wranå) cracked a three in their seventh for a 9-6 victory. The only North America victory came when Aileen Geving and Geoff Walker turned over a 5-3 lead after four ends and their replacements, Raunora Westcott and Kevin Koe, promptly scored singles in the next three ends for an 8-3 win. With each match worth two points, Team World outscored Team North America 4-2, leaving the visitors trailing by a single point, 12.5 to 11.5, in the overall points race towards 30.5. A total of 60 points are available over the four days of competition, which features traditional team games, mixed doubles games and skins games, with the first team to reach 30.5 points declared the winner. Half of the 60 points are available in Sunday’s skins matches. The last session of mixed doubles was like two games in one. One pairing played the first four ends and then a second pairing played the last four. “It’s crazy in how different that game is for me,” said Koe, skip of Canada’s men’s team in the Winter Olympics next month. “I literally play (mixed doubles) once a year, if I’m lucky enough to play in the Continental Cup. And especially four ends. It should still be curling but it doesn’t seem like it. You’d think you should just make your shots, but it seems really hard.” His Olympics-bound teammate, Brent Laing, had also never played the half-game before and endorsed the format.

“You’re here as part of a bigger team so the more often you play with different players and different formats I think that’s what this event was designed for.” The pressure on the first pairing is to ensure they don’t leave their replacements in a huge hole on the scoreboard, something Laing and Michelle Englot almost did until they scored two in the fourth end. “The last thing you want to do in mixed doubles … well the only thing you don’t want to do in the first half is play your second-half team out of it,” said Laing, who left his replacements down 4-3. “They have a little work to do, but they’re still in the fight. We came up with a couple of big shots when we needed it. Michelle bailed me out there in the second when they had a big end going. We had a bad third, but then in the fourth made a bunch of good shots, put two on the board.” The 2018 World Financial Group Continental Cup, presented by Service Experts, continues Saturday with two sessions of team matches, at 2:30 p.m. and 7 p.m. (all times Eastern). Sunday, two rounds of skins competition, at 2:30 p.m. and 7 p.m., will wrap up the event, and following Saturday morning’s mixed doubles draw,  the team captains and coaches made their selections for the skins matchups. Here’s a look at how things will shake down on Sunday: