Ontario’s Wallingford remains undefeated in round robin at Juniors 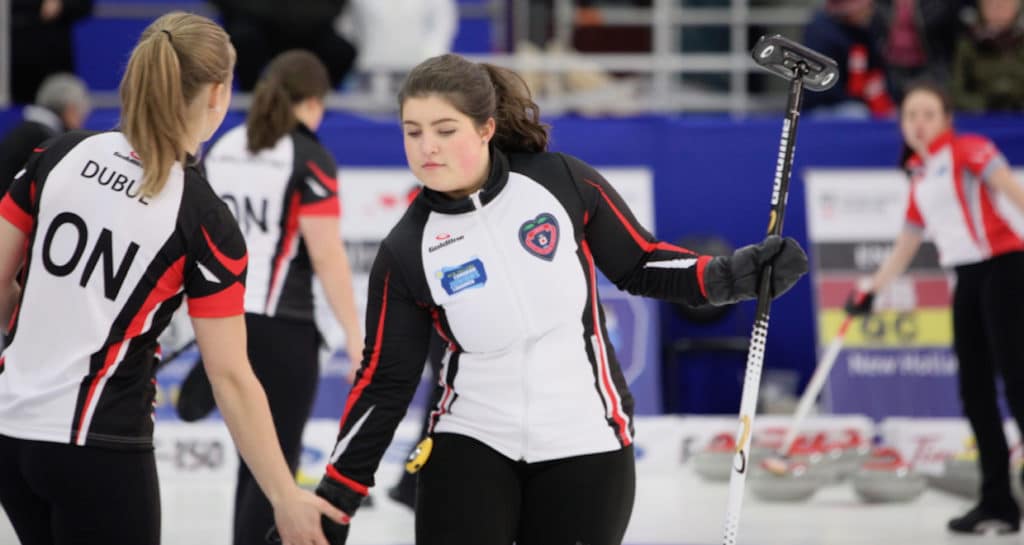 After trading deuces to kick off the game, Ontario went on the offensive, scoring three in the third and stealing the next four ends. Wallingford and her Ottawa Curling Club team of third Grace Holyoke, second Lindsay Dubue, lead Hannah Wallingford and coach Earle Morris remain undefeated in the round robin, tied with P.E.I.’s Lauren Lenentine at the top of Pool B with matching 4-0 records. Newfoundland and Labrador’s Mackenzie Glynn scored four points in the ninth end to cement an 11-4 win over Hailey Beaudry of the Fort William Curling Club in Thunder Bay. With the win, Glynn and her St. John’s foursome of third Katie Follett, second Sarah Chaytor, lead Camille Burt and coach Dave Tricket take solid hold of third place in the Pool B standings, behind P.E.I. and Ontario. In other women’s games on Monday afternoon, Sara England of the Callie Curling Club in Regina led her Saskatchewan team to its first win of the round robin – a solid 17-3 victory over Yukon’s Kelsey Meger. England’s former teammate and skip, Kaitlyn Jones, now playing for Nova Scotia, took control of a close game against New Brunswick’s Justine Comeau and scored six points in the second half on the way to a 10-4 win. On the men’s side, 2017 Canadian champion Tyler Tardi defeated the home-province favourite, Quebec’s Alek Bedard, by stealing two points in an exciting extra end. Tardi tied the game up in the tenth and, without hammer, played a tricky raise double take-out to remove the Quebec stones from the front of the four-foot. Facing two B.C. stones touching the button, Bedard’s last shot missed everything and Tardi stole the game with a 9-7 score to hand Quebec its second loss of the round robin. With the win, Tardi climbs a little closer to the leaders in Pool A, where Manitoba (4-0) and Nova Scotia (3-1) hold the top two positions. 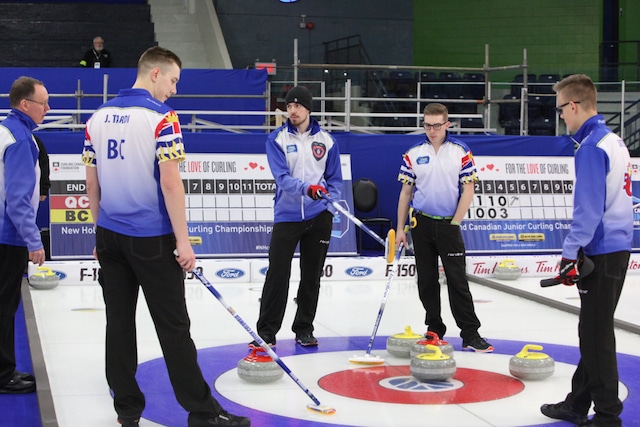 Tanner Horgan and his Northern Ontario team from Sudbury notched their second win of the day, an 8-3 victory over Northwest Territories’ Sawer Kaeser. Kaeser and his team from the Fort Smith Curling and Winter Sport Centre kept it close for five ends, but couldn’t hold on against the five-time Northern Ontario champion. In the only other men’s game, Karsten Sturmay led his Alberta foursome to a 7-3 win over Prince Edward Island’s Alex MacFadyen. Round robin action continues on Monday evening at 6:30 p.m. ET, and with three draws on Tuesday at 9:30 a.m., 2 p.m. and 6:30 p.m., all times ET. Fourteen men’s and 14 women’s teams will compete for Canadian titles, separated into two seven-team pools per gender for an initial round robin, followed by a Championship Round (top four in each pool) leading to the playoffs. The top team advances to its respective final on Sunday, Jan. 21, while the second- and third-place teams meet in a semifinal on Saturday, Jan. 20, to determine the other finalist. TSN/RDS2 will carry complete live coverage of the semifinals (women at 1 p.m. [all times ET], men at 6 p.m.) on Jan. 20 and finals (women at 1 p.m., men at 6 p.m.), held at the Aréna de Grand Mère. It’s the first year of event title sponsorship by New Holland, a world leader in the manufacturing and selling of agricultural and construction equipment. For event information, visit www.curling.ca/2018juniors.