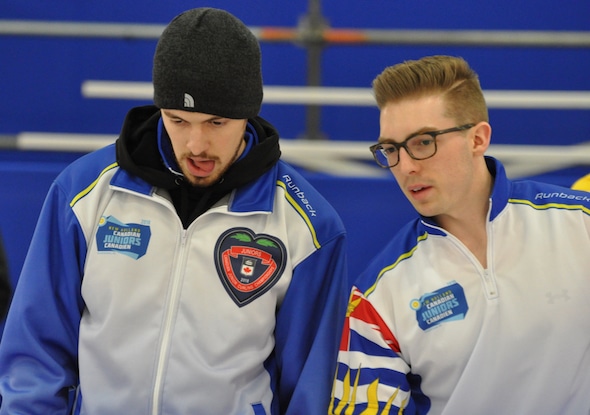 Tyler had woken up feeling ill — we’ll spare you the gory details, but suffice it to say there plenty of reason for him to simply spend the day in bed, recovering.

But at the last minute, in walked Tyler, and seven hours later, he was walking (barely) off the ice, having skipped his team (vice-skip Sterling Middleton, second and older brother Jordan Tardi, lead Zac Curtis) to a pair of victories, including a stolen 5-4 win over previously unbeaten Manitoba’s JT Ryan at  the Aréna de Grand -Mère that clinched first place in men’s Pool A in the preliminary round.

“It hit me like a train this morning,” said Tyler Tardi, 19, who won gold a year ago in Victoria with Middleton and his brother; Curtis replaced the aged-out Nicolas Meister. “You never want to sit out, especially at an event like this; it’s only once a year. You have to pull through, even as hard as it is sometimes.”

After a 5-3 win over New Brunswick’s Liam Marin in the morning draw, the game against Manitoba (5-1; Winnipeg) was another tight affair, with the B.C. team from Langley and New Westminster not nailing it down until stealing a point in the 10th when Ryan was heavy with his draw to the full four-foot.

“I have to give it up to my cousin (Manitoba vice-skip Jacques Gauthier)”, said Tardi, whose team improved to 5-1. “Those guys made a lot of shots against us, kept us on our toes the whole game, and JT unfortunately missed his last one, which is very uncharacteristic of him. We got lucky with that one, but that’s the way it goes sometimes.”

The reigning champs have been pushed hard in the early going in Shawinigan — not necessarily a bad thing, said Paul Tardi.

“Of course, we’re trying to play it one game at a time; there are terrific teams in this pool, great teams all around, so every game has been really tough and tight,” he said. “It’s probably good for us to be in those kinds of games and just play it close.”

Tyler Tardi was eager to leave the rink and go to bed back at the hotel for some recovery time; needless to say, he won’t be visiting the players’ lounge at the hotel, said his dad.

“Oh, no,” said Paul Tardi with a laugh. “I’m trying to stay away from him myself.”

Action continues in the 2018 Canadian Juniors with a draw Tuesday at and 6:30 p.m. (all times Eastern).

Fourteen men’s and 14 women’s teams are competing, with two seven-team pools in each gender. Following Tuesday night’s games, the top four teams from each pool will move into the championship pools beginning Wednesday, while the other teams will play in seeding pool games to determine the final standings. If tiebreakers are required, they’ll be played on Wednesday morning.