PENTICTON, B.C. – At no point during British Columbia’s encounter with Ontario did skip Kesa Van Osch’s team from Nanaimo have a lead until the time it counted. At the end. 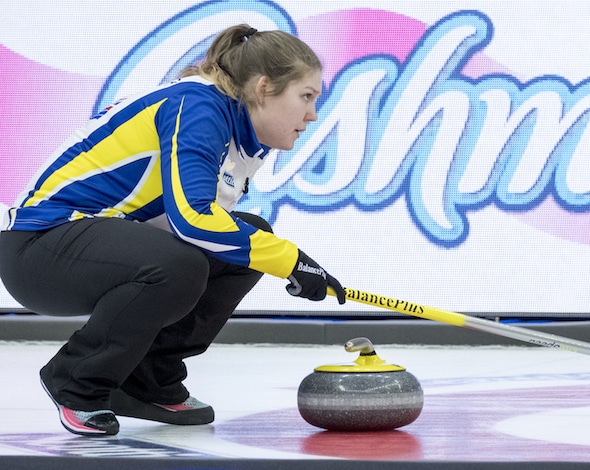 Van Osch delivered a takeout to score three in the 10th end for a 6-5 victory over Hollie Duncan (2-3; Toronto). The victory put B.C. (3-2) in sole possession of fourth place in Pool B standings and dramatically increased their chances of reaching the Championship Pool in the revised 16-team format at the 2018 Scotties Tournament of Hearts. “We got behind the 8-ball at a little bit at the beginning of the game, but we’ve had really good luck in a couple of our games just setting up for a big end when we have to at the very end of the game. We felt very good that we’d at least get our two (in the 10th end),” said Van Osch, who is supported by third Marika Van Osch, second Kalia Van Osch, lead Amy Gibson, alternate Rachelle Kallechy and coach Bill Tschirhart. “Hopefully, we can keep it up and we get there (to the next round). A little bit more pressure because now it’s all up to you, but we’re excited.” Ontario was seeking its third straight victory after opening with two losses. A win against B.C. would have put Duncan’s squad of third Stephanie LeDrew, second Cheryl Kreviazuk, lead Karen Sagle and alternate Danielle Inglis in the driver’s seat for that final berth because their next game is against winless Nunavut (0-5) tonight. “I messed it up for my team in the last end. When you miss your last two shots you’re going to give up three,” said Duncan. “We make those last two and it’s at least an extra (end). “We’ve got to win and see where the chips fall.” The top four teams in each pool will play another round robin against the teams from the other in the Championship Pool to determine which four will advance to the Page Playoff round. The pool records in the preliminary round robin will also count to determining who moves on to weekend play. A three-way tie for top spot emerged when Team Canada, skipped by Michelle Englot (Winnipeg), handed Newfoundland/Labrador its first loss, beating Stacie Curtis’s crew from St. John’s 8-5. That left both teams at 4-1 the same as Alberta, skipped by Casey Scheidegger (Lethbridge/Grande Prairie), which dispatched Nunavut’s Amie Shackleton (0-5; Iqaluit) 11-4. “We wanted to come out and continue improving our game and obviously get the win,” said Englot, whose teams consists of third Kate Cameron, second Leslie Wilson, lead Raunora Westcott, alternate Briane Meilleur and coach Ron Westcott. “We still can pick things up, but it’s a long week and you can still peak too soon.

“You want to take the best record possible into the championship round and that will be our goal, to come out a win another game tonight and hopefully go into the championship round at 6-1. You know you’re playing the top four teams in the other pool so you can’t afford to take too many losses into that round.” Curtis took the loss in stride because the team – with third Erin Porter, second Julie Devereaux, lead Erica Trickett and coach Eugene Trickett – is still in a good position. “I”m pretty confident we’re going to bounce back,” said Curtis. “If you’d told me we’d be 4-1 I’d take it. Every day of the week, I’d take it. “It would’ve meant we’d gotten off to a good start and put ourselves in a position where we can control getting to the championship round, which is our first goal. We want to get a couple more wins out of our pool and really finish strong and head into the second half of this week.” Quebec’s teenage team from Alma skipped by Émilia Gagné improved to 2-3 by scoring two in the 10th end for an 8-6 victory over Prince Edward Island (1-4) skipped by Robyn MacPhee of Charlottetown.