PENTICTON, B.C. – A week ago Kerri Einarson arrived at the 2018 Scotties Tournament of Hearts trying to get a ticket to the rock party. Now she and her Team Wild Card (East St. Paul, Man.) have moved to the head of the line. 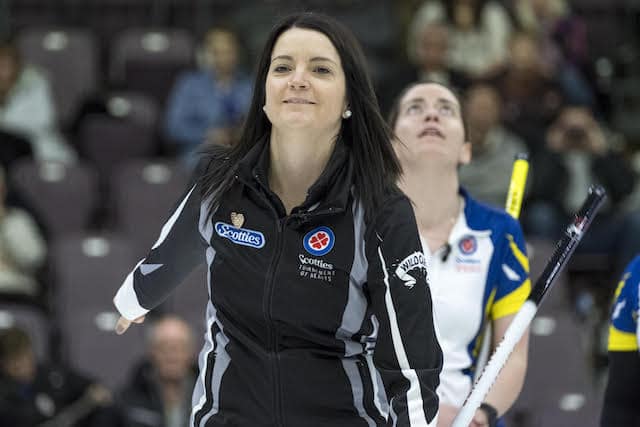 Einarson edged British Columbia’s Kesa Van Osch (Nanaimo) 6-5 in Championship Pool crossover round-robin play and is alone in first place with an 8-1 record. Einarson, third Selena Kaatz, second Liz Fyfe and alternate Kristan MacCuish are only in the field because they defeated Calgary’s Chelsea Carey team in the first-ever Scotties wild card game to nab the 16th and final berth into the Scotties last Friday night. “I’m pretty excited, I’m pretty pumped to be at the top,” said Einarson. “We have two tough games tomorrow (Team Canada and Alberta) and we definitely have to come out sharp for those. Their backs are up against the wall, too. We just have to play well and stay focused and come out with some Ws.” The top four teams in the Championship Pool, which has two draws remaining Friday, will advance to the Page Playoff. The desired spot is to finish in the top two to avoid being in the one-and-done game between the third- and fourth-place teams. “You want to be in that 1-2 game. You want to have those second chances if you can. We’re definitely fighting to get into that game,” said Einarson. After a woeful Wednesday when they suffered two losses, Manitoba had a big bounce-back day, resuming its previous dominant play. Jennifer Jones’s Winnipeg squad swamped Ontario (Hollie Duncan, Toronto) 11-3 Thursday night to move into a three-way tie for second at 7-2. “Big day tomorrow (Alberta and Team Canada), so we have to come out and be sharp. Every win gets you closer to that and that’s all you want to do is play in the playoffs,” said Jones, whose team also includes third Shannon Birchard, second Jill Officer, lead Dawn McEwen and coach Wendy Morgan. Also at 7-2 are Nova Scotia and Alberta after skip Mary-Anne Arsenault (Dartmouth) defeated Casey Scheidegger’s team (Lethbridge/Grande Prairie) 8-3. Nova Scotia has won five games in a row. “We’re sailing right along,” said Arsenault, who is backed by third Christina Black, second Jennifer Baxter, lead Jennifer Crouse, alternate Carole MacLean and coach Peter Corkum. “We had a real good day. Everybody played really well. Luckily in that game we got a chance for three in the first end and that really set the tone for the whole game. “Christina said after the game we just needed to get over the jet lag.” The one down side of winning, is the curling world is taking notice of the team. “I know,” said Arsenault with a laugh. “I prefer the sneak attack.” Arsenault has won five Canadian titles playing for Halifax’s Colleen Jones, and the high-level experience is helping here. “It’s always there. Through provincials and those tense games, being able to handle the nerves helps a lot,” said Arsenault, who gets daily emails of encouragement from Jones. Arsenault said even though it’s her 13th trip to the Scotties it doesn’t get old playing in it. “It really doesn’t. It’s an awesome event. People tell me out there in the crowd they’re happy I’m still playing. Some people ask me why I’m still playing, but I just love it. I can’t stop.” 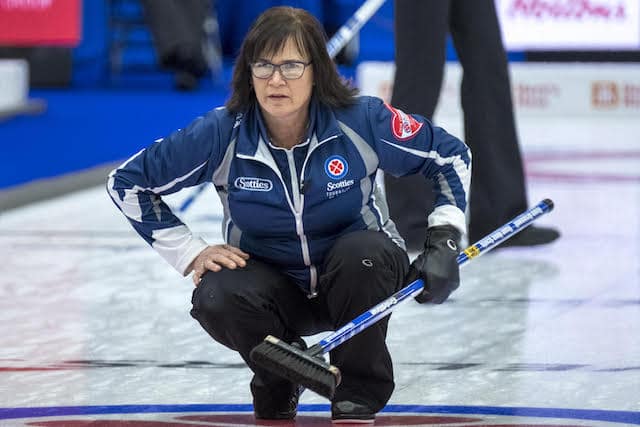