All-Manitoba final at the 2018 Scotties Tournament of Hearts

PENTICTON, B.C. – A team from Manitoba will win the 2018 Scotties Tournament of Hearts. All that’s left to determine is which one it will be. Team Wild Card, of East St. Paul, Man., skipped by Kerri Einarson defeated Mary-Anne Arsenault of Nova Scotia (Dartmouth) 12-9 in the semifinal this morning setting up a final against Manitoba’s Jennifer Jones later today (4 p.m., PT) at the South Okanagan Events Centre. 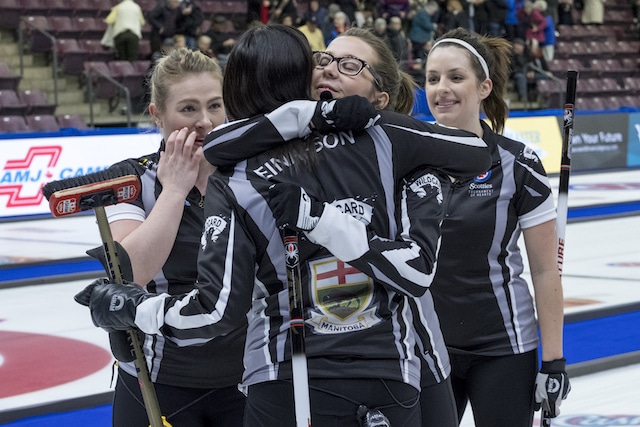 “It’s pretty cool,” said Einarson of an all-Manitoba final. “With three of us here one of us was bound to be in the final. We’re really looking forward to tonight’s game. “I’m super excited and I can’t wait to get out there.” The game turned heavily in favour of Einarson, third Selena Kaatz, second Liz Fyfe and lead Kristin MacCuish in the fifth end. It appeared Arsenault would hold Einarson to two but a hog-line violation on her last shot allowed Einarson the opportunity to gamble on splitting her own guard and her shooter into the house to score four for a 9-6 lead. “That hog-line violation cost us the game. My bad,” said Arsenault. “It would’ve been interesting had they only gotten two that end. “I had no clue (she touched it over the line). No clue. It felt good to me. I must have had a little finger on it or something.” Einarson thought Arsenault was sliding out wide and just held on a little too long in an attempt to correct herself. “That’s unfortunate, it’s tough to have that. But when we had our opportunity we capitalized on that,” said Einarson, who didn’t hesitate to go for four instead of taking the safe draw for three. “I had that shot already lined up in my mind a few shots back. I knew exactly where I wanted to put the ice, and where I needed to throw it.” In an effort to put pressure on other skips, Einarson has taken an aggressive, and at times high risk, approach in the playoffs. “Sometimes our aggressiveness got us into trouble,” she said. “We had a Wall of China up there (in the fourth end) when we gave them their second three, but we came back with the four and then held on for the last half.” The loss ended a nine-game win streak for Nova Scotia. The Maritimers finished the Championship Pool tied for first with the Wild Card and Manitoba teams at 9-2, but because Arsenault lost to both in the round robin she had to reach the semifinal via a victory over Northern Ontario in the Page Playoff 3-4 game Saturday. Now Arsenault, third Christina Black, second Jennifer Baxter, lead Jennifer Crouse, alternate Carole MacLean and coach Peter Corkum will take aim at representing Nova Scotia in their home province for the 2019 Scotties in Sydney. “It’ll give us lots of confidence going forward. It’sa  great development for our team. Hopefully it’s a good warmup for Sydney.” Einarson was awarded first place in the Championship Pool but dropped down to the semifinal after losing the Page Playoff 1-2 game 9-7 to Manitoba (Winnipeg) Saturday evening. Einarson will get another crack at Jones in the final. Jones is a five-time Canadian champion, a world champion and 2014 Olympic gold medallist, and beat Einarson in their first 17 meetings before Einarson won the round-robin game between them 9-4 on Wednesday. In the first end, Arsenault appeared to have buried a shot but Einarson was able to poke it out by running back a guard to score two. In the second, it appeared Einarson was going to be able to make Arsenault either take one or blank but in her takeout attempt she actually put a Nova Scotia stone into the house to allow Arsenault an open draw for three. Einarson responded with a short double takeout to score three of her own in the third to take a 5-3 lead. 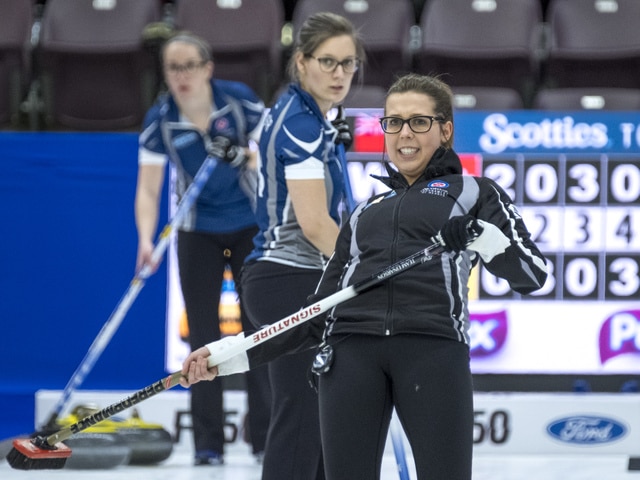 The exchange of Super Bowl Sunday field goals continued in the fourth. With her first shot, Arsenault went through an extremely narrow port to knock away Einarson’s shot stone to sit two and set up a score of three to regain the lead 6-5. But then came the big four-ender for Wild Card. Facing five in the sixth and a tower of Wild Card red rocks blocking her path to the button, Arsenault managed to cut the damage down to a steal of one to trail 10-6. In the seventh, she navigated yet another narrow port for a takeout to score two and cut the deficit in half at 10-8. It took until the eighth end before a team with the hammer was forced to take one, but it did give Einarson an 11-8 advantage. Arsenault was able to get just one in the ninth as well. Then with Born to be Wild echoing through the rafters Einarson secured the victory for Team Wild Card with a draw for one and the 12-9 triumph. 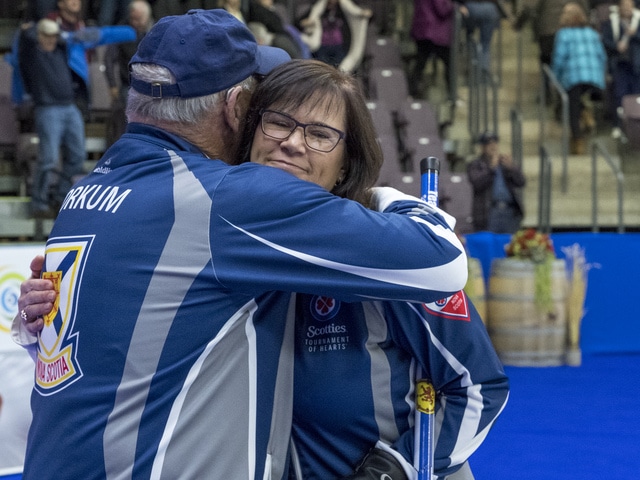