Canada won a second gold medal at the 2018 World Curling Championships on Saturday, as Tyler Tardi led his team to a 6-5 extra-end win over Scotland’s Ross Whyte in Aberdeen, Scotland, a follow-up to the gold medal won by Canada’s Kaitlyn Jones earlier in the day. 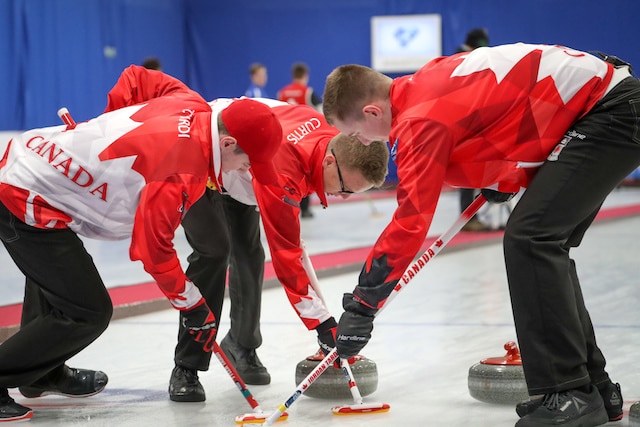 Tardi and his Langley, B.C., team of third Sterling Middleton, second Jordan Tardi, lead Zachary Curtis, alternate Jacques Gauthier and coach Paul Tardi faced a tough Scottish team that went undefeated throughout the competition. The final started out cautiously in the first few ends with the teams trading singles, but the momentum shifted dramatically as both teams tried to take advantage of misses on both sides. In the third, Tardi could have scored as many as five points on an open takeout, but his rock picked on release and Canada took only one point. In the sixth, Whyte just rubbed a guard, leaving Tardi a draw through a small port for three points. An end later, Tardi stole another point when Whyte’s big-weight triple attempt jammed, resulting in a 5-2 lead for Canada heading into the eighth. The final two ends were marked by mistakes by both teams – missed takeouts, hogged guards – and it was Tardi’s heavy draw on his last shot of the tenth that resulted in the extra end. But he made up for it with his last shot in the extra, coolly drawing to out-count the two Scottish stones in the rings and claiming another gold medal for Canada. “I don’t know, I’ve been dreaming about this moment,” said Tardi, who returned to the world championship this year after not making the playoffs in 2017. “To finally have it come true is unbelievable. I can’t believe I’m standing here.” The three points in the third end were important, he said, but they still didn’t feel his team had control over the Scottish foursome. “They’re all great shooters on that team. Hats off to them,” he said. “They made a really big comeback, so good on them. They made a lot of shots and made us really work for it.” Sharing this victory with Middleton, brother Jordan, Curtis and Gauthier (his cousin) was a special moment for him, he said. “They’ve been working so hard all season. There’s no better four guys to do this with,” he said. “I’m just over the moon right now.” In the men’s bronze medal game, Switzerland’s Jan Hess defeated USA’s Andrew Stopera, 7-4. Earlier in the day, Kaitlyn Jones and her Halifax-based team of third Kristin Clarke, second Karlee Burgess, lead Lindsey Burgess, alternate Lauren Lenentine and coach Andrew Atherton defeated Sweden’s Isabella Wranaa 7-4 to claim the gold medal.