It wasn’t the start they wanted, but as the old saying goes, “It’s not how you start, it’s how you finish.”

Canada looked pretty shaky in the opening ends of their third game of the 2018 Paralympic Games. The wheelchair curling team just couldn’t get comfortable.

“We just weren’t making our shots,” said Dennis Thiessen (Sanford, Man.), playing in his second Paralympics. “We let it slip with a couple of mistakes. so they got the lead on us early.” 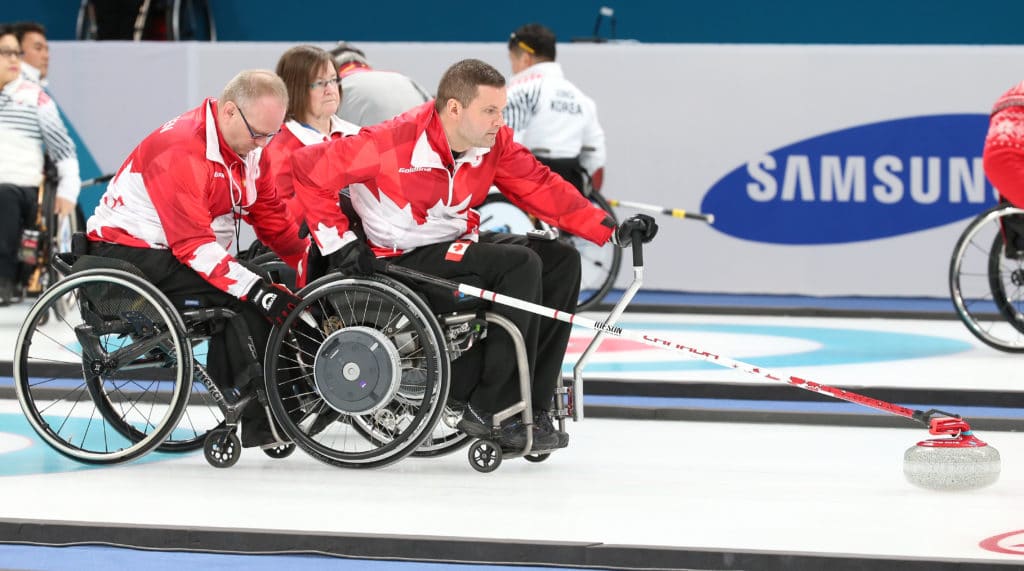 After giving up steals of one and three in the first two ends, the tide suddenly turned for Canada. A few missed opportunities from Sweden opened the door for a score of four, which tied the game after three ends.

“We knew that we were down four, but it’s a long game,”said Thiessen.  “It was far from being over. We were just trying for an easy deuce, and we ended up tying it up.”

For the most part, Canada remained in control for the rest of the game. The exception was a particularly messy fifth end, where the Swedish skip Viljo Pettersson Dahl narrowly missed a hit for three, instead giving the Canadians their second straight steal.

“We were all sitting on the edge of our seat for that one,” said Thiessen. “But hey, that’s wheelchair curling. That’s where the horseshoes come in.”

Theissen was referring to coach Wayne Kiel’s philosophy that every team is granted a few horseshoes at the beginning of the week for luck. You never know when they’ll come out, but everybody will have their turn to get some good (or bad) fortune.

“We were hoping to be 2-1 at this point, so to be 3-0 is a great feeling. I think our team can be proud of what we’ve accomplished so far, but we’ve got a long way to go.” said Thiessen, referring to another team philosophy: the marathon.

“We’re just on the third kilometre of the marathon right now. We’ve still got a way to go.”