Canadians down NPA in Dramatic Fashion at Paralympics

It was as though they were making it dramatic for the TV audience. Last end. Skips’ rocks. One for sure, and a measure for two and the win. The measuring stick doesn’t function properly. They have to get the other one from the far end of the sheet, delaying the result further. Talk about drama! Drama for the fans at least. For the players, it was pretty obvious. “I was pretty confident, and the NPA third looked at it and shook his head,” said Canadian third Ina Forrest of the delayed measurement. “So I was pretty sure he saw it the way I saw it. Mark [Ideson] took a look to be sure.” So sure were the Canadians, that skip Ideson had thrown his last rock into the wall instead of risking any rearrangement of the situated stones. 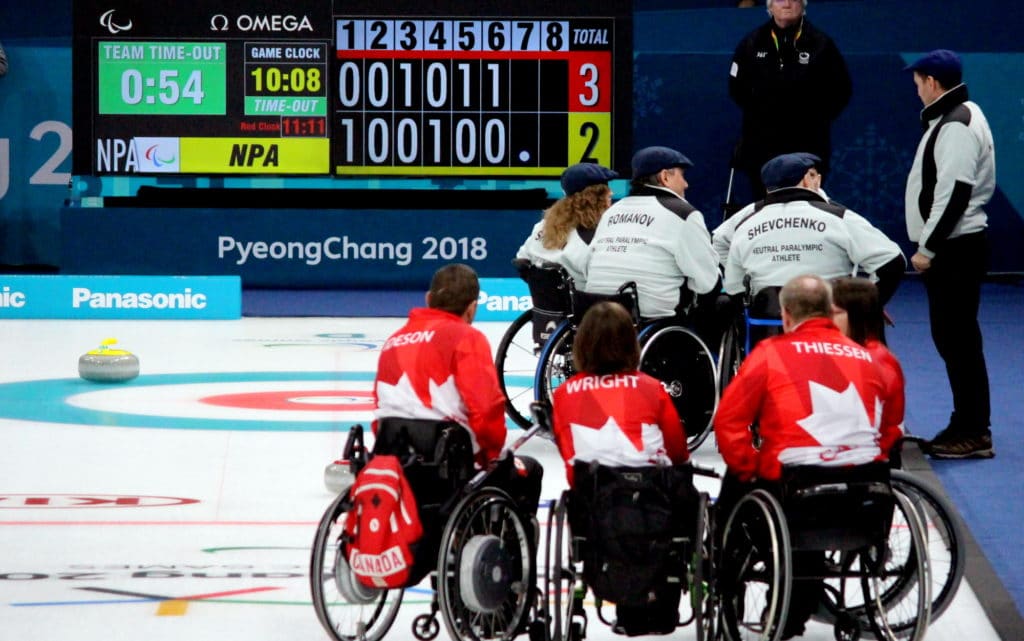 After the faulty measuring device was replaced, it was confirmed that Canada did, in fact, score two points, enough to seal the 5-4 victory over the Neutral Paralympic Athletes. As a side note, it appeared the measuring stick was damaged when the game official tripped and fell after measuring a stone in the fourth end. She was okay, but it turns out the stick was not. For the first time in several games, Canada didn’t have a huge deficit to overcome. The most they were behind was one point (three different times), which was the situation when the eighth and final end began. Lead Marie Wright threw two perfect shots, and an NPA miss set Canada up for a potential two. Dennis Thiessen drew to sit three, but missed his second shot, which opened the door for NPA to diffuse the situation. They rolled to bunch their yellow stones, and Ina Forrest took a crack at the double, just missing. “It was looking good, and then it wasn’t looking good, and then it was looking good again,” said Forrest. After NPA hit and rolled back to the previous spot, Forrest made no mistake, nailing the double and leaving Canada sitting three, spread across the rings. “You’re not looking at it to make it, but you’re hoping that’s the outcome,” said Forrest, alluding to the fact that hitting one rock is hard enough from a wheelchair, with no sweepers. “I threw it a bit harder, because I wanted it to stay a bit straighter than the first shot.“ NPA skip Konstantin Kurokhtin tried to freeze, but over-curled slightly. Ideson was able to punch it out and sit four, but left a little pocket. A perfect freeze by NPA may have forced an extra end, but, as it turned out (eventually), but he came up a half-inch light; close enough to measure. “I was thinking that we could have just called it,” said Forrest. “Both teams clearly saw it the same way, but once you’ve called for the measurement, then I guess you’ve gotta measure. We were pretty sure it was going to go our way, so it was an okay wait!!” The win moves Canada to a 6-2 record, which currently puts them in a tie for second place with South Korea, who would own the head-to-head tiebreaker. One more Canadian win would guarantee them a tie-breaker at worst. With three games to go, Forrest is confident they’ll reach the playoffs. “I think I like our chances. We’re rolling along pretty well. I think we’re going to be there.”