Sweden improves to 2-0 in bid for double golden season

NORTH BAY, Ont. — It’s only been done once before (by another Swede, as it turns out), and based on the early form being shown by Sweden’s Anna Hasselborg team, it’s not a long shot that it could happen again this week at the North Bay Memorial Gardens. 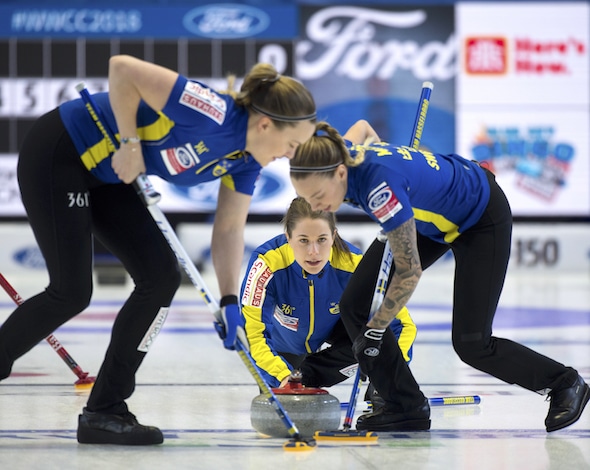 Anna Hasselborg’s Swedish team is off to a 2-0 start at the 2018 Ford World Women’s Curling Championship. (Photo, Curling Canada/Michael Burns)

The Swedes improved to 2-0 on Sunday morning, rolling to a 10-3 win over China’s Yilun Jiang (1-1), putting the game away with a five in the seventh end to prompt handshakes.

It was 12 years ago when Anette Norberg won the Olympic gold medal in Turin, Italy, and then completed the double by winning the Ford World Women’s Championship in Grande Prairie, Alta.

“I actually spoke to Anette Norberg about it,” said Hasselborg, 28. “She told me to just remember that you’re in good shape. Maybe watch a bad movie to take your mind of curling; get your sleep whenever you can.”

Sage advice, considering the past three weeks have been a whirlwind for the Swedish women, who disappointed the home crowd at the Gangneung Curling Centre by defeating the host South Korean Garlic Girls in the gold-medal game (the rematch, if you’re interested, is Monday at 7 p.m.).

“We took a week off after the Olympics, completely — just to sleep and eat, stuff like that,” said Hasselborg. “Just get back to normal routines. Then, we worked pretty hard in the gym to get our bodies going again. I think we’re where we should be now.”

The challenge for the Swedes in North Bay goes beyond the physical demands of a long season; it’s also about getting their collective minds reset after the euphoria of the Olympic gold.

“Of course, physically, for the girls, you start to feel it after this many games,” said Hasselborg. “But we’ve prepared a year for this; we know it will be hard on the body and the brain, but we feel we can do it.

“I think it’s possible; otherwise, we wouldn’t have tried to get to the worlds. I have to believe it. We will see; I think the girls are in very good physical shape, and I think they can handle it. We’re all about embracing the challenges.”

In the other morning games, South Korea improved to 2-0 — part of a four-way tie for top spot with the Swedes, idle Team Canada, skipped by Jennifer Jones and Russia’s Victoria Moiseeva — with an 8-5 win over Anna Kubeskova of the Czech Republic (0-2), stealing four in the ninth end.