NORTH BAY, Ont. – Anna Hasselborg had a post-game headache, but it’s her Team Sweden opponents who are feeling the pain at the Ford World Women’s Curling Championship. 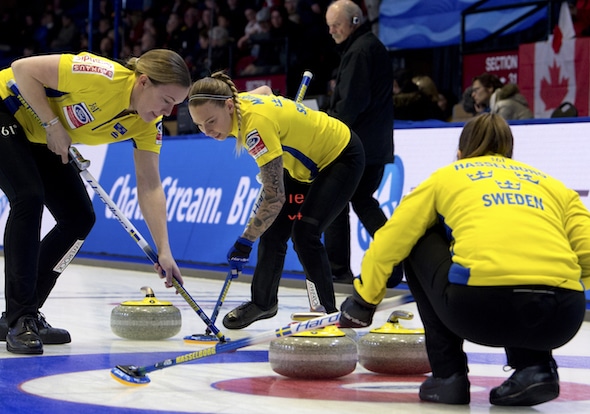 The Olympic champions stole three in the fourth end and went on to beat Anna Kubešková (3-3) of the Czech Republic 8-6 Tuesday at the North Bay Memorial Gardens to remain unbeaten after six games. “It was a solid game, but my performance wasn’t the best, I struggled a bit, but it was a strong team showing,” said Swedish vice-skip Sara McManus. “They put on a good game, too. It’s pretty hard, actually, when you have that big lead to keep it going. They put some good pressure and made some nice freezes.” The Olympic champions looked to have the game well in hand after scoring two in the third end and stealing three in the fourth when Kubešková’s last-rock draw rubbed a guard and let Hasselborg steal three. “We had one bad end that decided the game, unfortunately,” said Kubešková. “But we did our best. The start wasn’t good for us, but we managed to play quite a good game. It’s always difficult against such a great team.” But Kubešková and crew refused to go away, scoring deuces in the fifth, seventh and ninth ends to stay within striking distance. In the end Hasselborg, McManus, second Agnes Knochenhauer, lead Sofia Mabergs, alternate Jennie Waahlin and coaches Mari Prytz and Peja Lindholm made the shots to maintain control of the game.

McManus said the Swedish foursome is playing with a lot of confidence, similar to its Olympic performance, but in a different way. “At the Olympics we had some pressure but that was mostly from ourselves. But now that we have won the Olympics the (outside) pressure is a little harder on us. As long as we just trust ourselves and believe in ourselves it should go our way.” Victoria Moiseeva and Team Russia (4-2) bounced back from a potentially devasting loss to China Monday night with a solid 7-4 win over Tori Koana of Japan (3-3), scoring three deuces and controlling the game from start to finish. “We played really well. I’m proud of how we came back from yesterday because it was a really tough loss,” said Moiseeva. “We just decided to help each other more today. We talked more, we discussed about the shots more. Apparently, we forgot about that yesterday. Not completely forgot, but we just talked to ourselves and forgot to help each other so today we were more a team than yesterday.” In the other afternoon games, Diana Gaspari of Italy (2-5) lost her second straight extra-end game, giving up three to lose 10-7 to Daniela Jentsch of Germany (1-5), and Jamie Sinclair of the U.S. (3-3) got by Binia Feltscher of Switzerland (2-4) 7-5. Canada’s Jennifer Jones (5-0), South Korea’s EunJung Kim (4-1), China’s Yilun Jiang (3-3), Denmark’s Angelina Jensen (1-4) and Scotland’s Hannah Fleming (1-5) had the afternoon byes. The 2018 Ford World Women’s Curling Championship continues with the evening draw at 7 p.m. ET. Live scoring, standings and statistics for the 2018 Ford World Women’s are available at www.worldcurling.org/wwcc2018/livescores TSN and RDS2 will provide complete coverage of Canada’s games at the 2018 Ford World Women’s. Go to www.tsn.ca/2017-18-curling-broadcast-schedule-1.593081 for the complete schedule. For ticket information for the 2018 Ford World Women’s, go to www.curling.ca/2018worldwomen/tickets/ This story will be available in French as soon as possible at www.curling.ca/2018worldwomen/?lang=fr