Saskatchewan remains the only undefeated team after three draws in the round robin of the Canadian Wheelchair Curling Championship at Curl4Canada in Leduc, Alta. 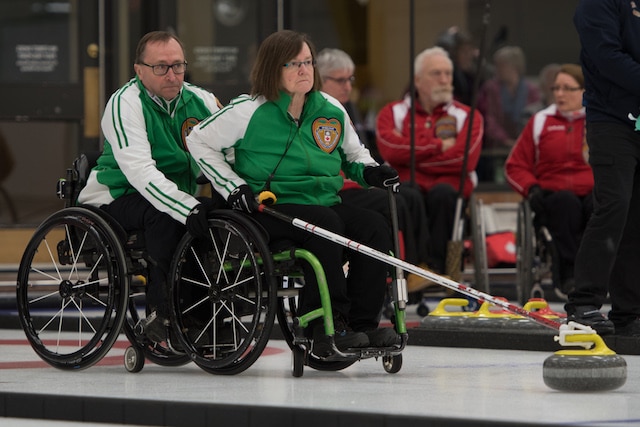 Saskatchewan’s Marie Wright guided her team to a 9-2 win over Manitoba’s Dennis Thiessen in the afternoon draw, then stole two ends on the way to an 8-3 win over Ontario’s Chris Rees on Tuesday evening. “It feels great,” said Wright. “My team is playing phenomenal. They’re making their shots and making my job easier. But the skip, fresh home from winning a bronze medal with Thiessen at the Paralympics in Pyeongchang, knows that it’s a long week and her team has to keep its focus. “That’s what we tell each other,” she said. “Anybody can beat anybody here. We have to come out strong, thinking every team is strong and just focus on our game.” As for feeling any fatigue after the demanding competition at the Paralympics, she just laughs. “I think I’m on too much of a high to be tired yet.” Five teams are lined up behind Saskatchewan with matching 2-1 records – Newfoundland and Labrador, Alberta, Nova Scotia, Quebec and British Columbia – with Ontario and New Brunswick trailing them at 1-2. Northern Ontario and Manitoba are still looking for their first wins. The round robin continues on Wednesday with draws at 3:30 p.m. and 8:30 p.m. ET. For news, scores and team information, visit the event website.