In a close contest that came down to a measure on last rock, Team Canada’s Wade White gave up a steal of one to fall 5-4 to Switzerland’s Dieter Wueest on the second day of competition at the World Senior Curling Championships in Östersund, Sweden. 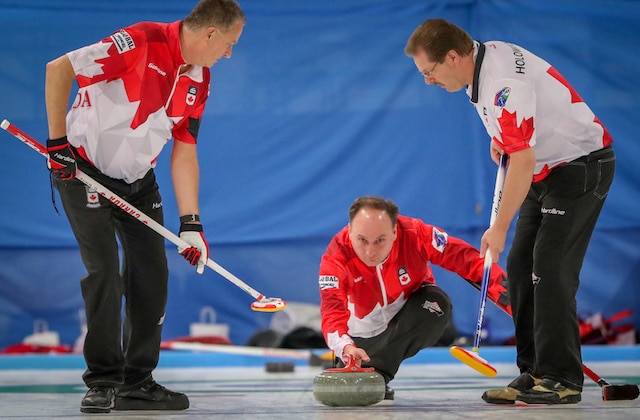 “It felt a little heavy out of my hand,” said White about his last stone of the game. “That was tough.” White, who is backed by vice-skip Barry Chwedoruk, second Dan Holowaychuk, lead George White and coach Bill Tschirhart found some positives in the loss, however. “That was a good game – they wanted to win, and we wanted to win, it was pretty competitive out there,” he said. “It was a well-curled game by both teams. We curled pretty good and executed really well I thought, compared to the first game (a 7-3 win over France.)” The men will play Germany’s Johnny Jahr on Monday at 6 a.m. ET. In the women’s round robin, Sherry Anderson with her Saskatoon team of vice-skip Patty Hersikorn, second Brenda Goertzen, lead Anita Silvernagle and coach Bill Tschirhart continue to build momentum. They cruised to a 9-1 win over Russia’s Tatiana Smirnova and remain undefeated after two draws. On Monday, Anderson will meet USA’s Margie Smith at 10 a.m. ET. You can find information on schedules and team line-ups at www.worldcurling.org/wscc2018