Canada’s men’s and women’s teams clinched spots in their respective finals at the Curling World Cup in Suzhou, China on Saturday. Both Kevin Koe and Rachel Homan join the mixed doubles team of Laura Walker and Kirk Muyres, who qualified on Friday. 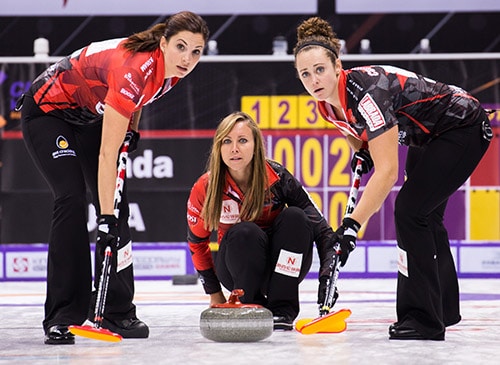 Lisa Weagle (left), Rachel Homan (centre) and Joanne Courtney (right) have locked up their spot in Sunday’s final with an 8-2 win against the USA. (Photo, World Curling Federation/Celine Stucki)

While Saturday ended with great news for Canada, both the women’s and men’s teams lost their first games of the day which put them in must-win situations in the evening.

Homan provided South Korea’s Minji Kim with her first win of the Curling World Cup in an 8-2 loss. The game was tied at two a piece until the halfway mark before South Korea put up scores of three in the fifth, two in the sixth and one in the seventh. This, combined with a loss from the USA’s Nina Roth during the same draw, meant that a spot in the final was on the line when the teams played each other later on.

Canada and USA started out fairly even, with Canada taking a 3-2 lead at the fourth-end break. However, Ottawa’s Homan, vice-skip Emma Miskew, second Joanne Courtney, and lead Lisa Weagle took control of the second half of the game. In the fifth end they stole two, followed by another deuce in the sixth en route to an 8-2 victory.

Now Homan will take on the defending Olympic champion, Anna Hasselborg of Sweden in Sunday’s final. Hasselborg’s team also finished the round robin with a 5-1 record, surely leading to a high-calibre women’s final.

“It was tough conditions out there, it was late a night. But there was a lot of shots made by both teams and thankfully we came out with the win there,” Homan said. “We’re excited to be in the final. It’s the first event of the year, you never know how it’s going to go, so we’re glad that we got that last final win. We played really well as a team and hopefully we continue that for the next game.” 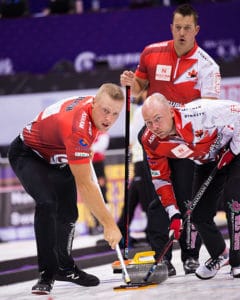 Koe, vice-skip B.J. Neufeld, second Colton Flasch and lead Ben Hebert started the day with a loss to Scotland’s Bruce Mouat. The defensive-minded game featured five blank ends in a row courtesy of Koe’s Calgary-based Canadian team. Koe trailed 2-1 in the eighth and needed to draw for one to push the game into a tiebreaker. However, Koe’s shot sailed too far into the back-eight, giving up the steal and securing Scotland’s 3-1 victory.

This meant Koe needed to win his final game against Japan’s Masaki Iwai who was winless in the double round robin. Koe managed the victory in a 12-4 fashion. The game featured a score of five points in the third and steal of four in the fifth.

But the win did not solidify Koe’s spot in the final. He needed to wait for the final draw of the day and see how Scotland’s Mouat did. If Scotland defeated Switzerland it would have forced a team draw-to-the-button tiebreaker. Scotland had a chance to win with its final shot, but Switzerland stole the victory away with a 6-5 win.

“Whatever happens, we’ve still had a good week,” Koe said. “We’ve gone 5-1 and beaten some good teams. All in all, for our first games together as a team it’s been very successful.”

Canada takes on Norway’s Steffen Walstad in the final. Walstad finished the round robin atop his pool with a 5-1 round robin record. 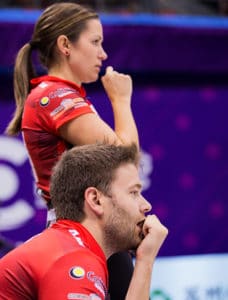 Laura Walker and Kirk Muyres already qualified for Sunday’s final. They defeated Sweden on Saturday in the final game of the round robin. (Photo, World Curling Federation/Celine Stucki)

Meanwhile, Canada’s mixed doubles team of Walker (Edmonton) and Muyres (Saskatoon) had already locked up its final berth during Friday round-robin action at the Curling World Cup. The duo had one final game in the double round robin against Therese Vestman and Robin Ahlberg of Sweden. Walker and Muyres took control of the game at the halfway point, taking an 8-4 win and gaining more confidence heading into Sunday’s final.

But it will be a challenging final game. Canada takes on the USA’s Sarah Anderson and Korey Dropkin who are the only undefeated team left in the entire field of men’s, women’s and mixed doubles teams with a 6-0 record. They finalized their spot atop the opposite pool with 5-4 victory against Switzerland.

Winners of the finals will be invited to the Curling World Cup Grand Final in Beijing this May, along with winning a $20,000 prize in men’s and women’s competition or $10,000 in mixed doubles (all dollar figures US).