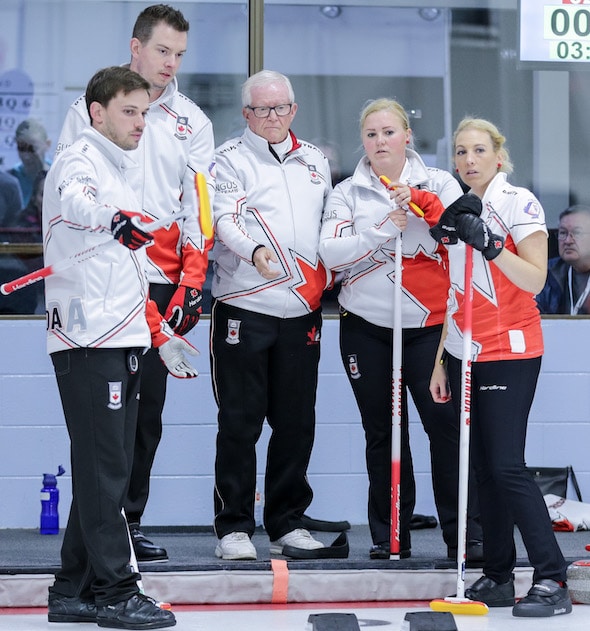 The Canadian team from the Thornhill, Ont., Curling Club — skip Mike Anderson, vice-skip Danielle Inglis, second Sean Harrison, lead Lauren Harrison and coach Jim Waite — was pushed hard by a Slovenian team it had beaten 9-2 on the opening Saturday of the event.

But Canada managed to break the game open with a crucial steal of three in the fourth end and sailed home with a 9-5 win over Slovenia’s Tomas Tisler.

The win advanced Canada to an 8 p.m. PT Friday quarter-final showdown with Scotland’s Robin Brydone, the lone unbeaten team (8-0) after round-robin play. Scotland and Canada (both countries had different lineups) played in the gold-medal game of the 2017 World Mixed in Champéry, Switzerland, with Scotland coming out on top against Trevor Bonot’s Canadian team from Thunder Bay, Ont.

Despite the easy win six days ago, Inglis knew her team was in for a fight on Friday afternoon against a Slovenian team that won its final three round-robin games to reach the playoffs.

“They played really well, but we knew going in that they’re a dangerous team to play right now,” said Inglis. “They had nothing to lose and we had everything to lose. We knew it would be a closer game than our first one with them, that’s for sure.”

Canada scored single points in the first and third ends, sandwiched around a Slovenian deuce in the second end.

But in the fourth, Canada started turning the screws and it paid off with some crucial Slovenian misses, resulting in the game-turning steal of three.

“We really needed that at that moment,” said Inglis. “They were making a lot of shots, and we weren’t playing really well for the first four ends. The confidence was huge from that, and we made quite a few key shots to really seal the deal in the end.”

Next up is a Scottish team that won eight straight in the round robin, but isn’t well known on this side of the pond.

“We do know their coach, Sean Turriff; he’s Canadian, he coaches at Humber College (in Toronto), and I’ve coached with him at several camps,” said Inglis. “But we haven’t seen their team before. All we know is that they’re young, and they’ve been making a lot of shots to win so far.”

The Canada-Scotland winner will meet the winner of the quarter-final between Norway’s Ingvild Skaga (6-1) and Switzerland’s Mario Freiberger in the semifinal Saturday at 10 a.m. PT.

The gold- and bronze-medal games are at 3 p.m. PT on Saturday.