The best Canadian mixed curling teams will converge at Winnipeg’s Fort Rouge Curling Club this Sunday for the 2019 Canadian Mixed Curling Championship. The field is rounded out with tried-and-true champions and up-and-comers. 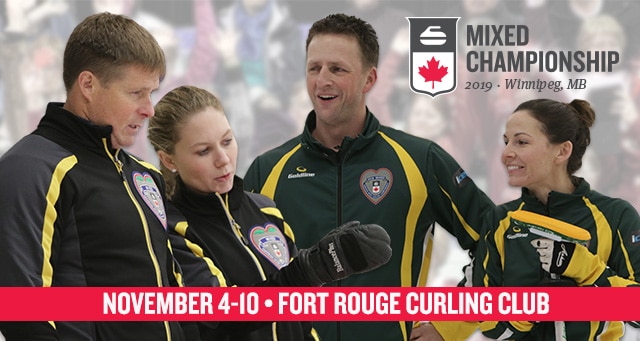 The 2019 Mixed Canadian Curling Championship begins this Sunday at the Fort Rouge Curling Club in Winnipeg.

2017 Canadian mixed champion Trevor Bonot of Northern Ontario returns to the event after representing Canada at the World Mixed Curling Championship last season. He led his Thunder Bay, Ont., team to a silver medal at the worlds and has his sights set on winning his second national title. Bonot’s third, Jackie McCormick, returns to the lineup and they are joined by Mike McCarville at second and lead Angela Lee-Wiwcharyk. Lee-Wiwcharyk is making her national mixed debut while McCarville – the husband of 2016 Scotties Tournament of Hearts silver-medallist Krista – is back for his third edition of the Canadian Mixed.

Bonot isn’t the only former champion at the event. 2012 Canadian mixed champions Jason and Colleen Ackerman are back in the mix for Saskatchewan at skip and lead respectively. The Regina duo is joined by teammates vice-skip Deanna Doig and second Mitch Criton. In 2012, Ackerman defeated Alberta’s Kurt Balderston in the final. Balderston, the 1992 national mixed champion from Grande Prairie, will be at the Fort Rouge Curling Club this year, representing Alberta for the sixth time in his career.

But there are other teams at the Canadian Mixed making debuts in Winnipeg and are determined to compete for a chance to represent Canada at the 2019 World Mixed Curling Championship (date and location to be announced by the World Curling Federation) at the end of the week.

Quebec’s Félix Asselin is coming in fresh off an appearance at the 2018 Tim Hortons Brier, playing vice-skip for his province. Asselin skipped Quebec at four national junior championships (2016, ’15, ’13, ’12), with his most notable performance in 2016 when he battled through a dislocated shoulder to come from behind and win a game. The Quebec team arrives in Winnipeg with a wealth of junior experience. Asselin’s brother Émile plays second for Quebec. He joined Felix at the 2018 Tim Hortons Brier as an alternate and played lead for Quebec at the 2015 and 2016 national junior championships. Quebec vice-skip Laurie St-Georges and lead Emily Riley guided Quebec to a silver medal at the 2018 New Holland Canadian Junior Championships.

Manitoba and Quebec’s youthful teams meet in the first draw of the event on Sunday at 7 p.m. (all times Central). It will be preceded by the Opening Ceremony at 5:30 p.m., where Manitoba Premier Brian Pallister will throw the ceremonial first stone. Pallister is closely connected to the Canadian Mixed Curling Championship. In 2001 the premier skipped Manitoba’s team at the event in Weyburn, Sask. Tickets for the Sunday evening draw include the Opening Ceremony and cost $10 at the door.

The championship features 14 teams (10 provinces plus Northern Ontario, Northwest Territories, Nunavut and Yukon) seeded and separated into two pools of seven teams each. The teams first play a round robin within their pool. At the conclusion of the round robin, the top four teams in each pool advance to the Championship Pool, when the teams play the teams from the opposite pool, carrying forward their full win-loss records. Meanwhile, the bottom three teams in each pool will go to the Seeding Pool, where they will compete against the three teams from the opposite pool. These teams also carry forward their full win-loss records.

The Championship Pool concludes on Friday and will be followed by two semifinals Saturday, Nov. 10 at 10 a.m., pitting 1 vs 4 and 2 vs 3. The two winners then advance to the gold-medal final Saturday afternoon at 2:30 p.m. while the two losing teams meet in the bronze medal game at the same time. Final results will determine seeding for next year’s Canadian Mixed, at Saguenay, Que.

Canada was tied with Norway for the best record in Group D, but its 6-1 record finished second by virtue of it’s head-to-head record.  Anderson and his Thornhill Curling Club team won all four playoff games (including a rematch against Norway in the semifinal) to earn Canada gold for the first time in the event’s history. Team Canada capped its historic run with a 6-2 victory against Spain’s Sergio Vez in seven ends.

Full event passes can be purchased at the door for $100. Daily passes and evening passes are also available for $25 and $10 respectively.

Beginning Monday, Nov. 5 each draw will be available via live-streaming coverage at cbcsports.ca and on the CBC Sports app for iOS and Android devices.