STRATFORD, Ont. — As gutsy performances go in the history of the Canadian Junior Curling Championships, you’d be hard-pressed to top the one put in by Quebec skip Félix Asselin on Thursday afternoon. 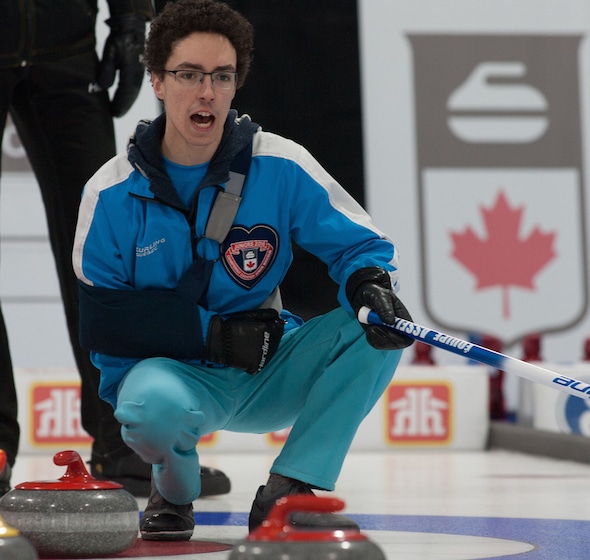 A few hours before a crucial Championship Round game against New Brunswick’s Alex Robichaud, Asselin showed up for a physio treatment at the Stratford Rotary Complex, and threw a few rocks to see if he could play.

He decided to push on, and played the game with a sling to stabilize the arm, removing it (with the help of a volunteer) only for his deliveries.

It didn’t start off so well; Asselin missed his last shot in the first and second ends, and New Brunswick would put five on the board in the third end to go up 6-1.

But in one of the most stirring comebacks of the 2016 Canadian Juniors, presented by Egg Farmers of Ontario, Asselin drew for three in the 10th end for a stunning 10-9 win over New Brunswick to stay alive in the hunt for playoff berth.

“Sure, we had some excuses. But that would be easy,” said Quebec coach (and Asselin’s father) Benoit Forget. “But there’s an old saying that losers find reasons. Winners find ways. That’s what we did.”

New Brunswick dropped to 4-4 with the loss. The top three teams will make the playoffs, with the first-place team going directly to Sunday’s gold-medal game. The semifinals are Saturday.

The injury prevented Asselin from sweeping, and also gave him troubles throwing his outturn, although that, he said, was more due to the tape job under his shirt.

The injury came out of nowhere, although he’s had previous shoulder issues.

“I’ve been playing (table tennis) every single day since we got here, and I was playing like I usually do,” he said. “Somehow it just happened. I went for a forehand and somehow it popped out.”

He and his dad went to the hospital and didn’t get back to the hotel until 3:30 a.m.

The physio treatment and the brief on-ice session convinced Asselin he could play. Not that his dad could have talked him out of it.

“It’s the blood in his veins,” said an obviously proud Forget. “And I know I can’t stop it. If there was any way he could play? We were better off with him playing the way he could than without him. And I know that’s where he wants to be. Let’s do it.”

Manitoba, meanwhile, wrapped up at least a semifinal berth with a 6-3 win over Saskatchewan’s Jake Hersikorn (4-4; Saskatoon). Dunstone, the 2013 Canadian champ, scored three in the ninth end to break the game open.

B.C. and Northern Ontario both had byes.

Manitoba skip Abby Ackland is tied for the lead in the women’s Championship Round. (Photo, Curling Canada/Bob Wilson)

Manitoba scored deuces in the second and sixth ends en route to a 6-5 triumph over Saskatchewan’s Kourtney Fesser (4-4; Saskatoon).

In other Championship Round play, New Brunswick’s Justine Comeau (6-2; Fredericton) dropped out of the lead pack after losing 10-4 to Ontario’s Courtney Auld (4-4; Thornhill).

The six teams of each gender that didn’t make the Championship Round are playing Seeding Pool games to determine final rankings and set the pools for next year’s Canadian Juniors in Victoria.

The Championship and Seeding Rounds continue on Thursday with draws at 1:30 p.m. and 6:30 p.m. (all times EST).