Sarah Stroeder did not expect to be cruising through the Travelers Curling Club Championship with a perfect 3-0 record at this point of the week. The Yellowknife skip downed Alberta’s Morgan Muise in an extra end to hand the 2016 Travelers Championship silver medalists their first loss of the event. The loss knocked the Calgary Curling Club team to 3-1 in the standings. 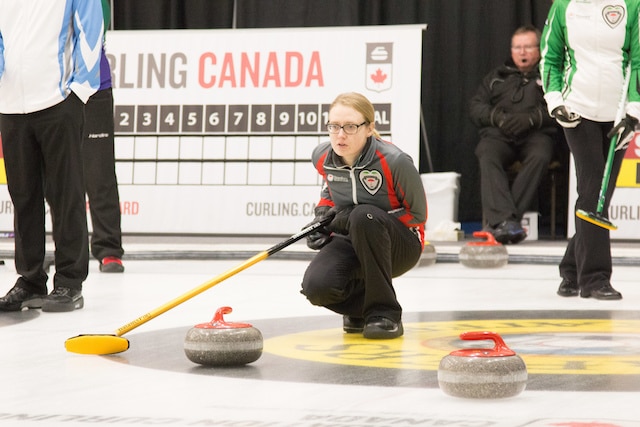 “I’m in a little bit of shock. They’re such a good team and we felt good to be able to hang with them as long as we did and then we had our chances and capitalized,” Stroeder said after posting the 6-5 win in Miramichi, N.B. Stroeder, third Alanah Jansen, second Marie-Claude Savoie and lead Anneli Jokela were leading Alberta 5-3 in the eighth end but a burnt rock resulted in Alberta having the chance to score the tying point and push the game to an extra end. “It’s always a little bit rattling but we tried to stay calm and that’s our mantra. We often remind each other we took holidays to be here so let’s relax when things do get tense,” Stroeder said referring to the late-game drama. The foursome have curled together for two seasons with Stroeder and Jokela having played on the same team for over six years. This is Stroeder’s third appearance, first as skip, at the national championship that showcases the top club curlers from across Canada. In 2014 Stroeder played second for Sharon Cormier in Halifax and lost the semifinal after a 5-1 round robin record. She returned to the Travelers in 2016 at third and finished with a 2-4 record, missing the playoffs in Kelowna. “This time we’re feeling pretty good with where we are right now but we don’t want to get overly excited,” Stroeder said before the team hit the ice for Draw 9 against Saskatchewan. When asked if she had thought what it would be like to play for a medal on the weekend, Stroeder admitted it wasn’t something she had given too much thought to. “I think the club back home would have a pretty big party for us but we have a lot of work between now and then,” she said. “But we’re ready for it!” Saskatchewan’s Elaine Osmachenko and her team are on the heels of Northwest Territories and Alberta in women’s Pool A standings. The team from the Moose Jaw Ford Curling Centre are 2-1. British Columbia and Northern Ontario both have two losses. After picking up their first win on Tuesday, Nunavut’s women’s team dropped their Wednesday morning game and fell to 1-3. Quebec is still searching for a first win in Pool A. 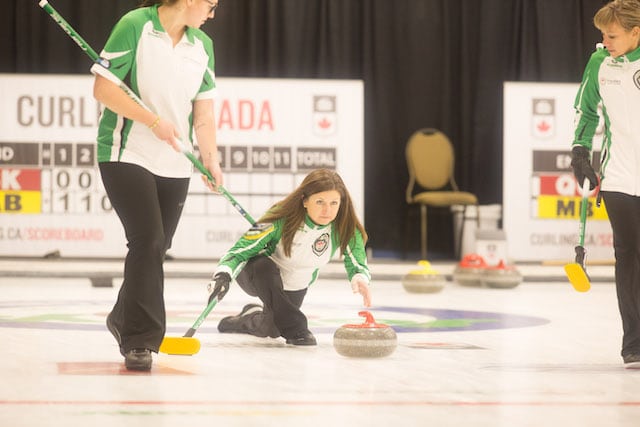 The Manitoba women’s champions continue on cruise control in Pool B. Deb McCreanor skipped her team to a 7-5 victory over winless Prince Edward Island. Manitoba improved to 3-0 with the win and are alone at the top of Pool B. Newfoundland and Labrador are keeping pace with the leaders in Pool B. Pam Osborne’s team sailed past Yukon to earn their third win and a 3-1 record. Ontario dropped a 6-5 extra end decision to Nova Scotia to slip to a 2-1 record on Wednesday afternoon. Nova Scotia improved to 2-1 with the Draw 8 win. New Brunswick at 1-2, Yukon at 1-3 and Prince Edward Island at 0-4 round out the Pool B standings. The two men’s pools are led by Manitoba at 4-0 in Pool A and British Columbia and Saskatchewan at 3-0 in Pool B. The 14 men’s and 14 women’s teams are split into two seven-team round-robin pools. After a single round-robin, the top three teams in each pool will make the playoffs. The first-place teams will be seeded directly into the semifinals, Friday, Nov. 23, at 6:30 p.m. (all times Atlantic). The second- and third-place teams will meet in crossover quarter-finals Friday at 1:30 p.m., with the winners moving into the semis. The semifinal winners will play for gold, and the losers will play for bronze, Saturday, Nov. 24, at 9 a.m. Selected games from the 2018 Travelers Curling Club Championship will be live-streamed at www.curling.ca/2018travelers. Scores and standings from the event will be available at www.curling.ca/scoreboard. For draw times, team lineups and other event info, go to: www.curling.ca/2018travelers/