When the 2018 Travelers Curling Club Championship wrapped up last weekend at the Miramichi Curling Club in Miramichi, N.B., the event’s success resonated far beyond the hard-won medals on the ice. 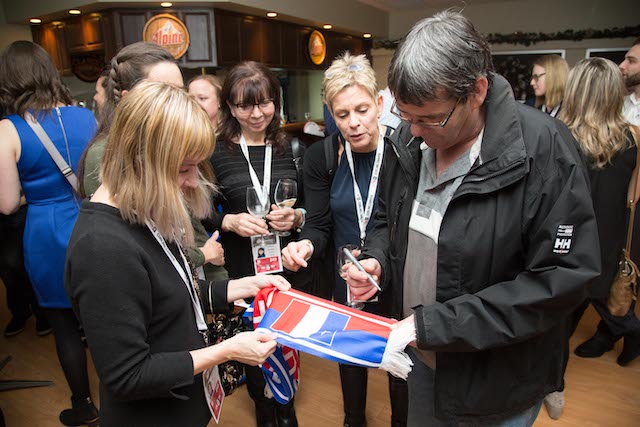 Friendships were forged throughout the week at the 2018 Travelers Curling Club Championship in Miramichi, N.B. Team Quebec asks a volunteer to sign a scarf as a memento of the event (Curling Canada/Jordan Pinder photo)

“After four years of overseeing this event, I have to say this was among the best,” says Robyn Mattie, who manages this annual Curling Canada competition for club teams across Canada to experience the thrill of representing their province at a national championship. “The local host committee did a fabulous job. The consensus was that the small-town support and the laid-back attitude of everyone was fantastic.” British Columbia’s Cody Tanaka (who throws fourth rocks, along with skip Vic Shimizu, second Trevor Bakken and lead Mark Yodogawa) and Alberta’s Morgan Muise (with third Lyndsay Allen, second Sarah Evans and lead Sara Gartner) earned gold medals after a highly competitive week of curling. Nova Scotia’s Kurt Roach and Michelle Williams took home the silver, and Ontario’s Matthew Dupuis and Stacey Hogan won bronze. But the action wasn’t all on the ice, and it wasn’t all about winning medals, either. Giving back to the sport and the community is something that curlers everywhere understand, and this year’s Travelers competition was no different, with each team working hard to solicit donations, through the For the Love of Curling Fundraising Contest, in support of youth curling across Canada. Through their efforts leading up to the event, and onsite with a silent auction, collectively the teams raised just over $29,000 to be invested in youth curling programs across Canada. There was extra incentive, too: through the fundraising contest, teams had the opportunity to earn ballots for a series of team prize draws including a grand prize draw for the Great Vegas Get-Away. This grand prize includes accommodation, flights, $400 in pre-paid Visa cards and four full event passes to the 2019 World Financial Group Continental Cup Jan. 17-20 in Las Vegas. “The fundraiser was a huge hit with the curlers,” says Mattie. “The excitement for the grand prize was electric. The Nunavut women (Chantelle Masson, Alison Griffin, Carmen Kootoo and Alison Taylor) won, and their reaction was historic. Lots of tears!” 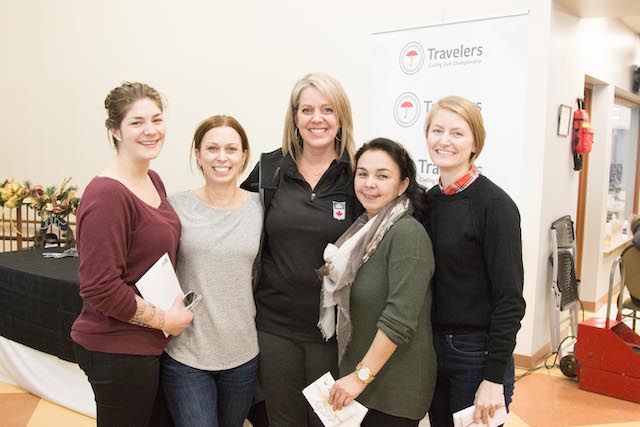 “It’s so inspiring to witness the selfless efforts from athletes, who let’s face it, are here competing in a national championship, as they choose to give back with such enthusiasm to the sport they love,” says Brodie Bazinet, Foundation Manager for Curling Canada. “The positive impacts are felt at local, provincial and national levels, as these philanthropic initiatives pull together the curling community, from volunteers and spectators to athletes and organizers, for accomplishments that go WAY above and beyond.” And the generosity didn’t stop there. A draw to win a case of lobster was so popular that it sold out in a day and the organizers had to do it two more times, raising well over $1000 for the Miramichi Curling Club’s youth curling program. “The generosity of the curlers and community does not surprise me especially when they are told that is goes to help children,” says Shawn Ingersoll, chair of the Miramichi host committee, who has spent the last few months trying to fundraise for lite rocks for the club’s Little Rock program. Thanks to the lobster draw, he already has three sets of rocks in place and the fourth on order. “The curlers at this event understand what it takes to build a curling club and you have to do it from the grassroots level and they were very generous with their silent auction bids and tickets on lobster.” While the action on the ice was highly competitive, Ingersoll and the host committee were also impressed with the unique connections the Travelers provides off the ice among curlers, fans, volunteers and officials. 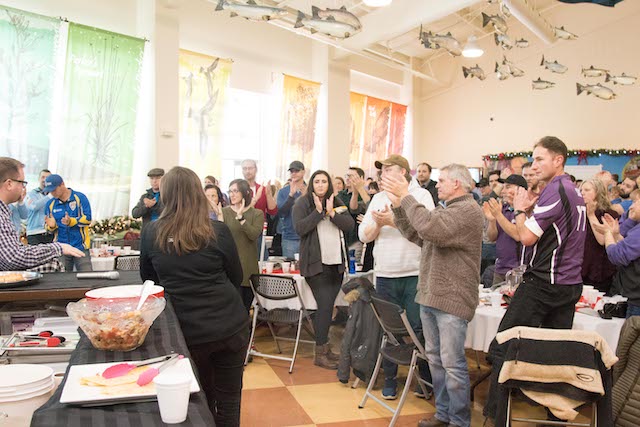 Another standing ovation from curlers, fans, officials and volunteers at the awards ceremony of the 2018 Travelers Curling Club Championship in Miramichi, N.B. (Curling Canada/Jordan Pinder photo)

“At the beginning of the week at the reception, you can see teams begin to chat and get to know each other and then by week’s end they seem to be long-time friends. The connection that teams made with the volunteers was amazing,” he says. “Also the connection they made with our Little Rock curlers was life-changing for the kids.” The annual curling club championship is a unique event that provides an opportunity for club curlers to experience high-level competition, represent their province on a national stage and, perhaps most importantly, support the growth of curling across Canada – not to mention, have some fun, something that didn’t fall short in Miramichi. Nightly live entertainment and dancing, visits with “ambassadors” in the local community, sight-seeing and even a few all-night song-sessions left participants and organizers cheering. “This group of athletes was the most appreciative, respectful group,” says Mattie. “There was a standing ovation for every single award handed out at the closing dinner. Jim Sias from the Yukon, who won the Skip Sportsmanship award, took my mic, broke down in tears and claimed this was without a doubt the best week of his life – making the rest of us shed a few, too.” “For me this is event is a celebration of the club curler,” says Ingersoll. “They are the ones that play in the nightly leagues, volunteer for events and keep clubs going. We loved hosting this event and would do it again.” 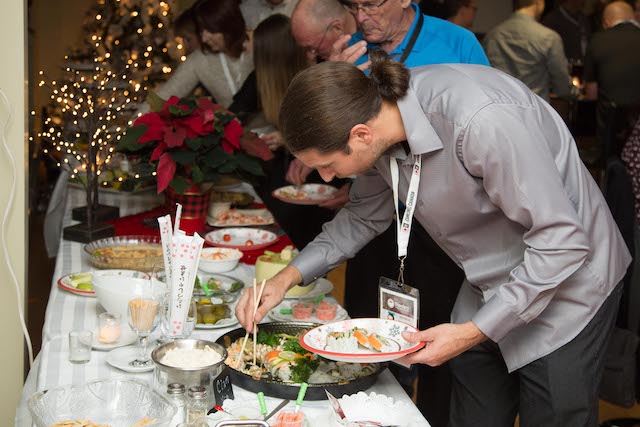 The hospitality of the Miramichi host committee knew no bounds throughout the week of competition and during special events, such as a the awards ceremony (Curling Canada/Jordan Pinder photo) 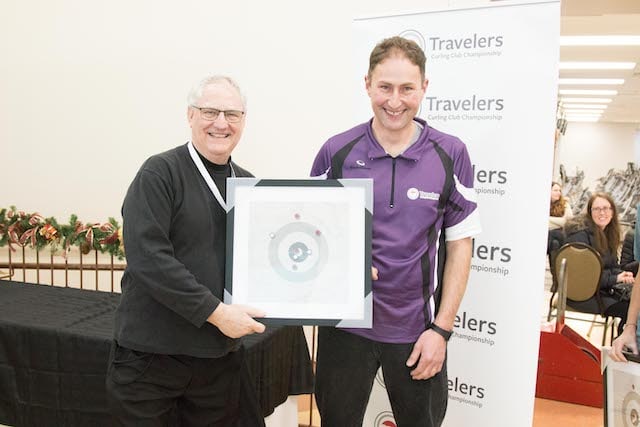 “The best week of my life,” said Yukon skip Jim Sias after receiving the Skip Sportsmanship award at the conclusion of the 2018 Travelers Curling Club Championship in Miramichi, N.B. (Curling Canada/Jordan Pinder photo) 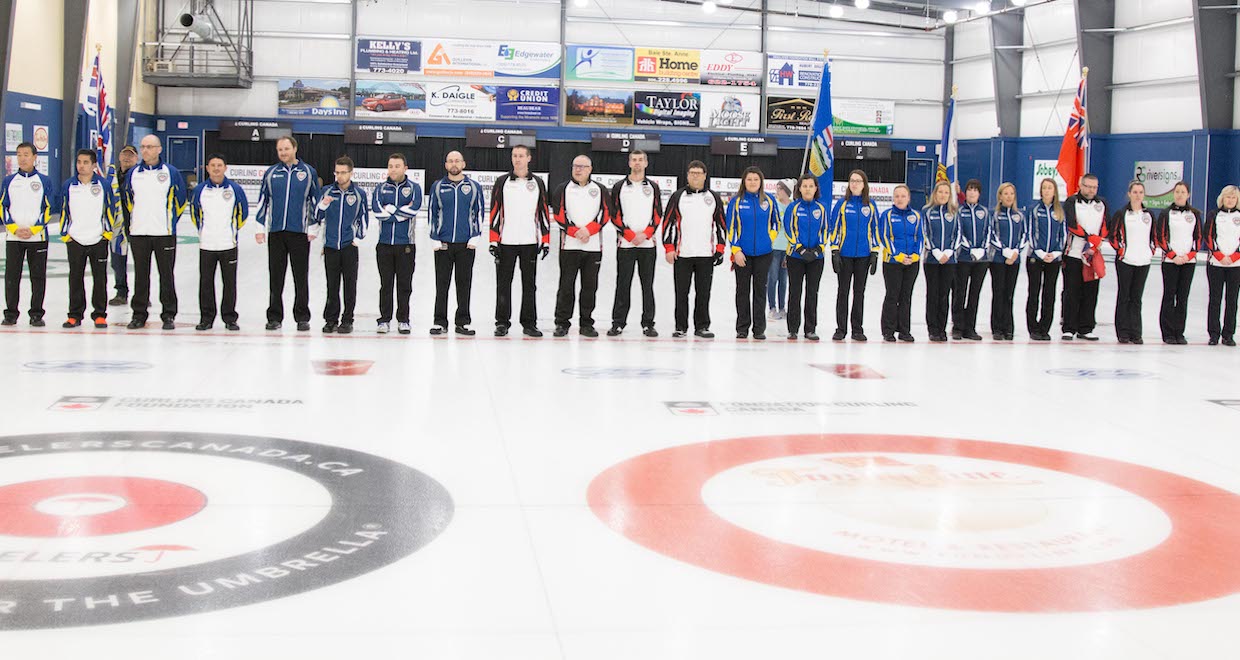