The 2019 World Financial Group Continental Cup returns to Las Vegas this Thursday for the fourth time in the event’s 15-year history, but this time a new format puts emphasis on mixing and matching the world’s greatest players in ways never seen before. 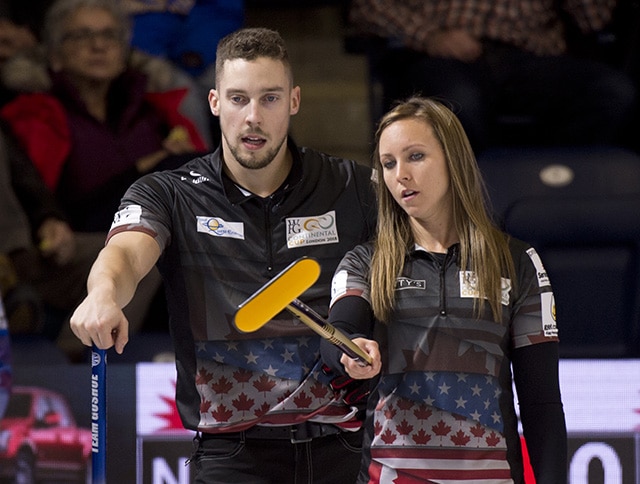 Brett Gallant and Rachel Homan, along with their respective teams, will represent North America once again at the World Financial Group Continental Cup in Las Vegas on Thursday. (Photo, Curling Canada/Michael Burns)

Six teams from North America will once again take on six rivals from the rest of the world over the four-day competition in curling’s version of the Ryder Cup. The teams will play a unique blend of traditional curling games, mixed team play, skins competition and mixed doubles games. While Team North America is on a six-event win streak, Team World is poised to make some noise with one of its strongest lineups yet and is looking for redemption after last year’s loss that came down to a tiebreaking draw-to-the-button.

Four of the six teams from Team World are returning after last year’s tiebreaker loss. But coach Fredrik Lindberg of Sweden, assistant coach Christoffer Svae of Norway and captain David Murdoch of Scotland, are sure their lineup will use that loss as motivation to win their first World Financial Group Continental Cup since 2012.

The women are led by Olympic gold-medallist Anna Hasselborg of Sweden, Eve Muirhead of Scotland and Silvana Tirinzoni of Switzerland.

Teams will battle for the Cup with some changes to the event format. A total of 60 points will still be available to win, with the first team to earn more than 30 points being declared the winner. However, the event has expanded from three to five competitions.

Teams will compete in two draws (one men’s, one women’s) of Traditional Team play, reduced from six. Each team at the event will play one game worth one point in the overall standings.

There will be four mixed doubles draws, increased from three. Each player will compete in a full Mixed Doubles game, and each of those games will be worth one point in the overall standings.

New this year are the Team Scramble and Mixed Team Play events, which put an emphasis on how curlers can perform with teammates they’d regularly play as opponents.

In the team scramble, men’s and women’s teams will be mixed to form new same-gender lineups. However, front-end and back-end teammates cannot be on the same lineup. There will be one men’s Team Scramble draw and one women’s team scramble draw, with each game worth one point in the overall standings.

The World Financial Group Continental Cup will conclude with two draws of Skins games, with each game worth five points in the overall standings.

All games are eight ends and there are no extra ends.

The opening ceremony is scheduled for 8 p.m. on Wednesday at the Orleans Arena.

The 2019 World Financial Group Continental Cup is owned by Curling Canada and is being operated through a business arrangement with USA Curling and the Reno Tahoe Winter Games Coalition.

You can download the event media guide by clicking here.

Tickets for the 2019 World Financial Group Continental Cup can be purchased by clicking here.