With age comes experience, but despite their youth, Graeme Weagle’s Nova Scotia-based squad is putting on an impressive performance at the 2019 New Holland Canadian Juniors. 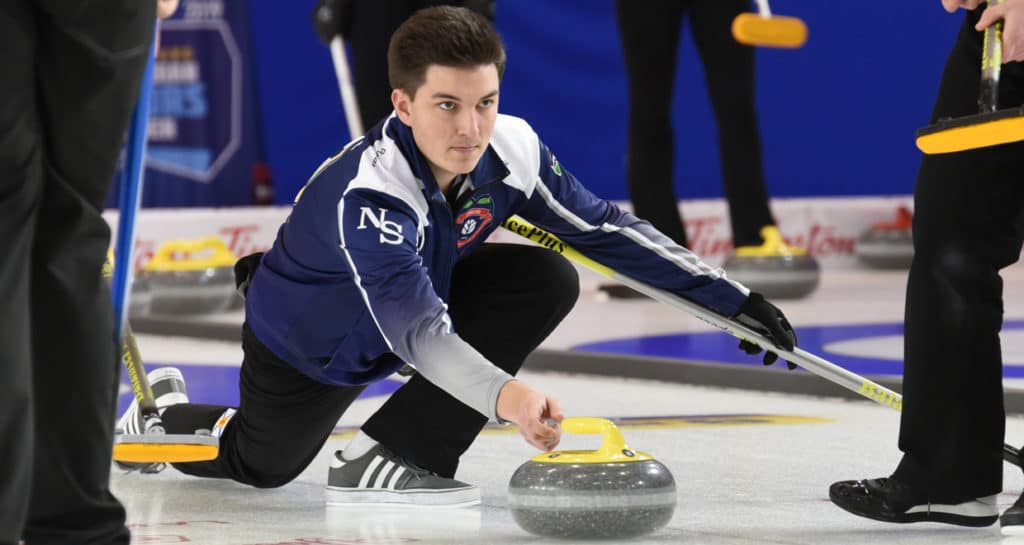 Weagle, along with Owen Purcell, Jeffrey Meagher and Brett Dorey won their afternoon game 12-3 over Sawer Kaeser from Northwest Territories to improve their record to 3-1. “We’re right where we want to be with a good shot to make the Championship Pool,” said Weagle. “We seem to be getting better every game, so I think it bodes well going forward.” This is the second national championship experience for Weagle, Purcell and Meagher, as they were all part of the winning team at the 2018 Under-18 Curling Championship held in St. Andrews, N.B. “This event is pretty similar to the U-18 nationals,” said Meagher. “Though the competition is a little bit more intense out here.” Meagher does note that the experience in St. Andrews has paid off in a big way when it comes to playing against the top U-21 teams in Canada. “We know we can compete here. That’s the biggest thing. We know that we can come out here and play well with the experience we gained at the U-18 and having the experience on the arena ice helps.” Weagle agrees that there’s a huge benefit to having playing at the nationals before, but notes that their team’s success, regardless of their age, has the competition sitting up and paying attention. 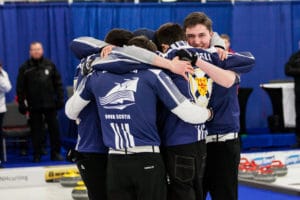 “I think winning the U-18 Championship put a target on our backs,” said Weagle. “If we hadn’t won last year, some of these big name teams wouldn’t have known who we are. I’m sure we put a lot of them on notice by winning the championship last year.” Not only are the four players competitive curlers, but multi-sport athletes. Meagher in particular is a competitive paddler at the national level, a sport that he finds beneficial to doing in the curling off-season. “Paddling definitely helps me with the sweeping in curling. I’m able to keep it up, especially through these long 10-end games,” said Meagher. “That’s one of my more important jobs on the team as a front-end player.” On the live-streamed feature sheet, Ontario’s Sam Steep defeated Nunavut’s Javen Komaksiutiksak 16-3 to climb back to an even 2-2 record. The women’s draw saw the battle of the undefeated teams with Mackenzie Zacharias from Manitoba take on Quebec’s Laurie St-Georges. It was Zacharias with the edge and an 8-4 victory over St-Georges. Manitoba is now at four wins with Quebec dropping to 3-1. The defending champions from Nova Scotia cruised to a 9-4 victory over Northern Ontario. The Halifax-based team skipped by Kaitlyn Jones now sits at 3-1 while Northern Ontario’s Kira Brunton drops to 2-2. Selena Sturmay from Alberta picked up a 7-4 win over Host team’s Skylar Ackerman. Sturmay remains undefeated at 4-0 while Ackerman is still searching for a win after four games. All eyes were on sheet D at the end for the battle between Tyanna Bain from Northwest Territories and Saskatchewan representative Sara England that came down to the last shot. England was able to execute a hit and stick for the 3-2 win and to jump to a 3-1 record. Bain drops to 0-4. Justine Comeau from New Brunswick made a hit for the 6-5 win over Newfoundland and Labrador’s Mackenzie Glynn to advance to 3-1. Glynn moves to 1-2 in the standings. Action continues at the 2019 New Holland Canadian Juniors with draws on Monday at 7 p.m. (all times Central). Fourteen men’s and 14 women’s teams are competing, with two seven-team pools in each gender. Following Tuesday night’s games, the top four teams from each pool will move into the championship pools beginning Wednesday, while the other teams will play in seeding pool games to determine the final standings. Round-robin games at the 2019 New Holland Canadian Juniors are being streamed live exclusively on Curling Canada’s Facebook page. TSN/RDS2, the official broadcaster of Curling Canada’s Season of Champions, will provide live and exclusive coverage of the womenʼs and menʼs semifinals on Saturday, Jan. 26, and finals on Sunday, Jan. 27. The same games also will be streamed live in the U.S. on ESPN3. CLICK HERE for streaming and broadcast information. The winning teams Sunday will represent Canada at the 2019 World Junior Championships, Feb. 16-23 in Liverpool, N.S. The full scoreboard can be viewed at www.curling.ca/scoreboard/. For event information, visit www.curling.ca/2019juniors.