SYDNEY, N.S. — Sarah Wark’s 33rd birthday is off to a roaring start. 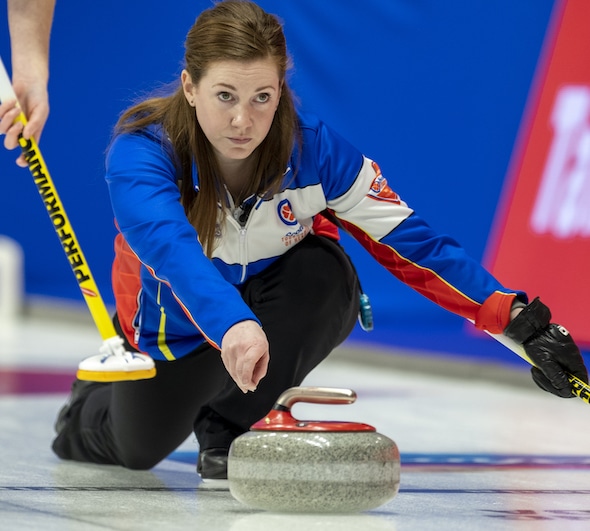 The B.C. skip turned 33 on Sunday — her second full day at the 2019 Scotties Tournament of Hearts at Centre 200 — and the celebration is underway after a second straight victory to kick off the round-robin draw, a 7-5 win over Manitoba’s Tracy Fleury (0-2; East St. Paul).

“It really is the best birthday present I could have ever received,” said a smiling Wark, whose Abbotsford team is rounded out by vice-skip Kristen Pilote, second Carley Sandwith, lead Jen Rusnell, alternate Michelle Dunn and coach Rick Fewster. “I thought the best one I could give myself was getting to the Scotties, but a win on my birthday is pretty darn special, against a very good team.”

The victory left B.C. in an early three-way tie for top spot in Pool A of the 16-team, two-pool competition — tied at 2-0 with Ontario’s Rachel Homan (Ottawa) and Alberta’s Chelsea Carey (Calgary).

B.C. got its Scotties off to a stunning start on Saturday, opening against the home-province Nova Scotia team skipped by Jill Brothers, and score a big four in the 10th end for a 7-6 victory. But it was valuable for more than just the mark in the win column.

“I think we learned a lot yesterday,” said Wark. “We had an easier time managing the ice today; we felt a little more consistent on it, and more confident with our throws. Yesterday we felt like we were always guessing in spots. We were really on the ball today; we were putting our rocks in good places, we had a good idea of draw weight, which really helps. And we were able to put the shots together when we needed to.”

That was evident against Manitoba, particularly in the middle ends; trailing 3-1, B.C. took control with three in the fifth end and a steal of one in the sixth and never looked back.

“I don’t know that it makes a statement about our team, but I know that for us, it makes us feel like we belong here,” said Wark, a Scotties rookie. “You never know, going into a field of this calibre that are so good, that we watch on TV all the time, and not having played against them in the past, you never know if you’re coming to come out and not be able to hold our own out there. So I’ll be happy to have close games with teams like these. Getting the win is even better.”

In the other Sunday morning results, Ontario stole two in the fourth end on its way to a 12-4 win over Nunavut’s Jenine Bodner (1-1; Iqaluit); Northern Ontario’s Krista McCarville (1-1; Thunder Bay) stole single points in the second and third ends, and two in the fourth, en route to an 8-2 win over Quebec’s Gabrielle Lavoie (0-2; Saint-Romuald) and Alberta was a 6-5 winner over Nova Scotia (0-2; Halifax).