SYDNEY, N.S. — Even though her team is tied for the best record in Pool B of the 2019 Scotties Tournament of Hearts, Wild Card skip Casey Scheidegger stepped off the ice Wednesday morning at Centre 200 thinking that Thursday could be a long day featuring tiebreakers for her Lethbridge, Alta., squad. 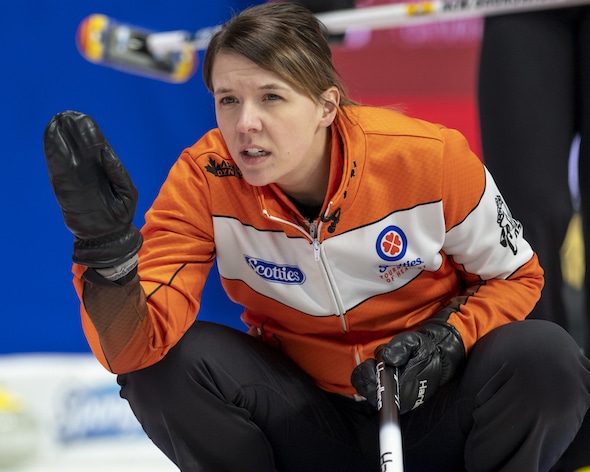 Casey Scheidegger and Team Wild Card have clinched a berth in the Championship Pool at the 2019 Scotties Tournament of Hearts. (Photo, Curling Canada/Andrew Klaver)

Informed that, in fact, her team won’t have to worry about tiebreakers, and, with a 5-1 record following its 7-3 win over New Brunswick’s Andrea Crawford (2-4; Saint John), is assured of a spot in the Championship Pool, Scheidegger was, in equal measures, surprised and delighted.

“Are you serious? That’s exciting, I didn’t know that!” exclaimed Scheidegger. “I was gearing up to play a potential tiebreaker. OK, cool, that’s awesome!”

It’s not unfamiliar territory for Scheidegger, vice-skip Cary-Anne McTaggart, second Jessie Haughian (pronounced High-en, if you’re curious), lead Kristie Moore and alternate Susan O’Connor. At the 2018 Scotties in Penticton, B.C., playing as Team Alberta, the team posted a 7-1 record in the preliminary round before losing three of its four Championship Pool games to miss the playoffs.

So, beginning with tonight’s preliminary round finale against Team Canada’s Jennifer Jones (4-2; Winnipeg), the key for Team Wild Card is not just to maintain its momentum, but keep building it.

“We have a tough game tonight, so it would be nice to have a really strong game tonight and go into the Championship Pool feeling good,” said Scheidegger. “We learned last year that you want to go in there with as few losses as possible. Momentum is huge in this.”

Momentum is also on the side of Suzanne Birt’s P.E.I. champs from Charlottetown (5-1), who also clinched a Championship Pool berth on Wednesday with a 15-5 win over Kerry Galusha of the Northwest Territories (3-3; Yellowknife). The Islanders tied two Scotties records (total points in a game by one team; biggest steal [six points] in a game) with the victory, which came a day after P.E.I. and New Brunswick set a Scotties record in P.E.I.’s 13-12 win — the  most total points by two teams.

“That was our main goal this week, to make that Championship Pool, and now we’ll try to do it with the best record possible,” said Birt.

So now that the Championship Pool is clinched, might the goal be adjusted?

“I think so,” agreed Birt. “We have as good of a shot as anybody, and having a few good games in the Championship Pool will give us a good shot at making the playoffs.”

Team Canada and Saskatchewan are assured of tiebreakers to decide the final berths into the Championship Pool, and would clinch those berths outright with wins tonight.

A tiebreaker draw will be necessary in Pool A, and it will be played at 9:30 a.m. (AT) Thursday.

With a win over Team Wild Card in Wednesday evening’s draw (7:30 p.m. AT), Jones would pull into a tie with Nova Scotia legend Colleen Jones for the most total wins by a skip at the Scotties (140).