Sturmay will play for gold at Winter Universiade

It all came down to stolen points in the final ends of their opening playoff games. For the Canadian women, the result was heartbreak, but for the men – the opportunity to play for gold on Saturday at the 2019 Winter Universiade in Krasnoyarsk, Russia. 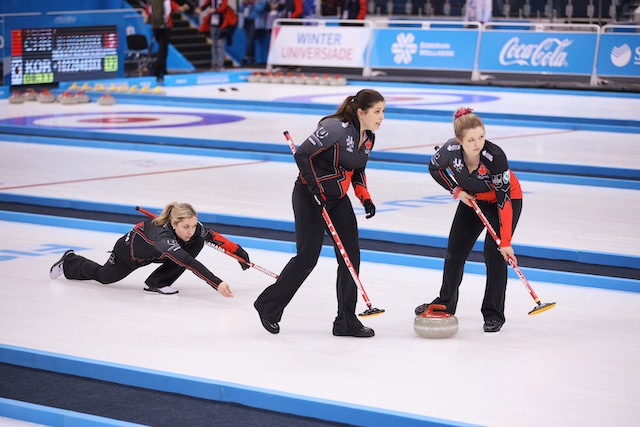 Kristen Streifel and her team of vice-skip Danielle Schmiemann, second Selena Sturmay, lead Jesse Iles, alternate Paige Papley and coach Garry Coderre saw their playoff hopes slip away when Great Britain’s Sophie Jackson stole two points in the final end of their qualification game on Saturday, leaving Canada on the short side of a 6-4 score and eliminating them from playoff contention. Streifel and her University of Alberta champions were tied 4-4 after nine ends against Jackson, who will also represent Scotland at the upcoming women’s world championship. Facing two rocks in the rings protected by guards, Streifel had to draw with her final shot and just slid too far, giving up the steal of two. “We came out really, really strong and I thought we did have control for most of the game,” said the skip after the loss. “We were in the position we wanted to be, tied up coming home with the hammer is pretty ideal in a big game like this. Unfortunately, just couldn’t  come through with my last two shots and sometimes that’s just the way it goes. It’s going to sting for awhile, pretty heartbreaking right now.” But the Canadian men will definitely be bringing home a medal from this Universiade. Karsten Sturmay and his team of third Tristan Steinke, second Chris Kennedy, lead Glenn Venance and coach Rob Krepps will be battling for gold after winning an extra-end nailbiter over Switzerland’s Yannick Schwaller in the men’s semifinal on Saturday morning. Sturmay stole a single in ten for a 9-8 victory over the former World Junior champion when Schwaller’s final takeout overcurled and sailed by the Canadian counter. “Holy moly! What can I say,” said Sturmay after the unexpected turn of events. “I’m so proud of our team for never giving up and sticking with it. We were fortunate to get a small mistake on his last one and a great shot to lock that freeze on. We made them have to play something pretty tough for the win. In those situations, obviously the odds are stacked against you. But the most you can do is puts some pressure on your opponent and we came out on the right side today.” The University of Alberta champions will face off with Norway’s Magnus Ramsfjell for Universiade gold on Sunday morning in Russia (Saturday, 9 p.m. ET). Switzerland’s Schwaller will play the United Kingdom’s Ross Whyte for bronze. In the women’s medal games, Sweden’s Isabella Wranå will face South Korea’s Minji Kim for gold, while Jackson will play Russia’s Maria Komarova for bronze (3 a.m. ET). “We are so excited to play for a gold medal,” said Sturmay, looking ahead to Sunday’s final. “We came here striving for a medal for our country. In a competition of this level, to walk away with a medal of any colour is a huge accomplishment. Obviously, we are going out there tomorrow and give it our all and strive for gold. But the sun will come up again if we don’t get that.” Live scoring will be available on the official event website, https://krsk2019.ru/en Additionally, keep checking curling.ca for stories throughout the competition. There will be live streaming of the 2019 Winter Universiade, including selected curling matches, at www.fisu.tv/ as well as FISU’s Youtube channel. For information on the Canadian athletes competing in all sports at the Winter Universiade, go tousports.ca/en/international/universiades/winter-2019 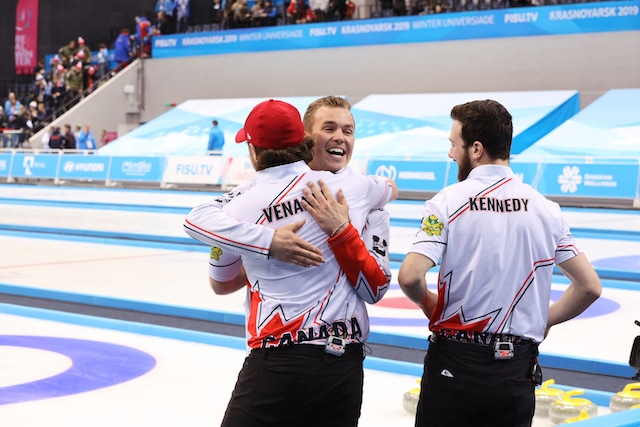