SILKEBORG, Denmark — It was hardly unexpected for Canada’s Chelsea Carey that her Calgary team would have to grind out wins at the  2019 LGT World Women’s Curling Championship, presented by Pioneer Hi-Bred. 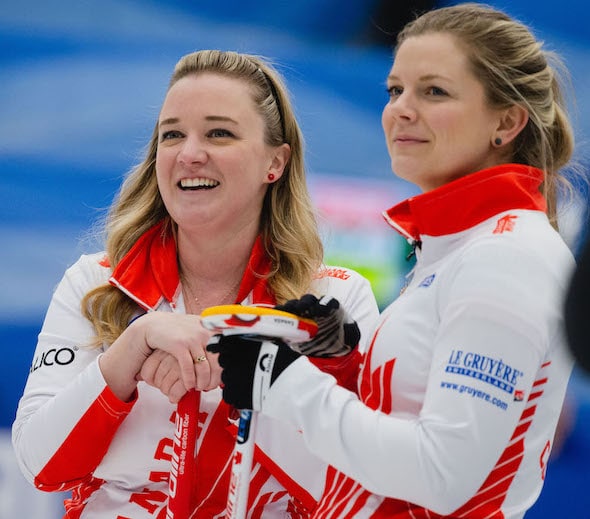 Canada’s Chelsea Carey, left, and Sarah Wilkes were all smiles thanks to a pair of wins on Sunday. (Photo, World Curling Federation/Céline Stucki)

So while Canada’s down-to-the-wire 8-7 win Sunday night at the Silkeborg Sportscenter against a surprisingly stubborn Latvian team skipped by Iveta Stasa-Sarsune may have raised some eyebrows, Carey has become accustomed to having to work through some trying circumstances en route to the win column.

“It certainly didn’t come easy, but we had that at the Scotties, too,” said Carey, whose Calgary team — vice-skip Sarah Wilkes, second Dana Ferguson, lead Rachel Brown, alternate Jill Officer, team coach Dan Carey and national coach Elaine Dagg-Jackson — wasn’t let off the hook until Stasa-Sarsune’s shooter rolled out of the rings in the 10th end on an open-hit attempt to score two and force an extra end. “We talked to four or five teams in Sydney who told us they had their best games of the week against us — games, in theory, if you look at the rankings, you should win easy, but they weren’t easy. But we’re used to that.” 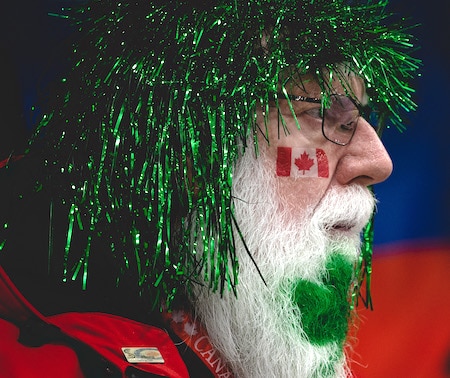 Against Latvia, it was a combination of Canadian draw-weight issues — both in the throwing and the judging by sweepers — and some superb shotmaking by the unheralded Latvians that took the game to the last rock in the 10th end.

“Latvia played great; they made some great shots,” said Dan Carey (Chelsea’s dad). “They were coming through holes, making cross-house doubles, rolling behind corners. They made a lot of really, really good shots. And we seemed to have a really hard time getting precision on our draws. But they hung in there, kept scratching and clawing, and got the win in the end. We’ll take it and get out.”

As was the case in a morning win over Germany, Canada buckled down in the last half of the game; deuces in the seventh and ninth ends — the latter set up by Brown’s precision draw to sit buried behind a corner guard — were crucial in nailing down the victory, which left Canada with a 2-1 record, while Latvia dropped to 0-3.

“Today was a big day for us; we needed to bounce back after yesterday,” said Chelsea Carey, referring to Saturday night’s loss to South Korea. “This was a battle all the way, but who cares? How you win the game doesn’t matter once you’re 2-and-1. We needed that, and we’ll need to continue to get better as we go along. Hopefully we’ll be a little more precise tomorrow.”