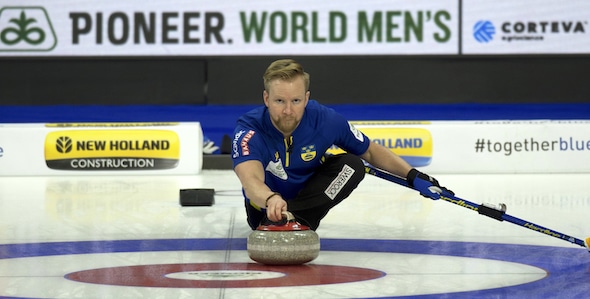 The defending champion Edin, seeking a record-tying fourth world title, rolled past Jaap van Dorp of Netherlands 9-5 in Sunday morning’s third draw for their second straight win. Edin has spoken about jet lag and his team’s long layoff after Saturday’s opening win but agreed it hasn’t had any negative impact on his team. “Came out really strong in the first end. We were really close to getting three, he makes a great shot so only made two,” he explained. “After that it was pretty one-sided, we didn’t give them chances until 8-1 and after that they got a couple of scores that we probably shouldn’t have let them have. But still a real solid performance.” Edin, third Oskar Eriksson, second Rasmus Wranå, lead Christoffer Sundgren, alternate Daniel Magnusson, who took over for Sundgren for the second half, team coach Fredrik Lindberg and national coach Peja Lindholm, out of the Karlstad Curling Club, scored two in the first end, stole singles in the second and third and erupted with a four in the fifth. Edin made a delicate rub-back of a Netherlands stone in the four-foot to get his four-ender. “We kind of said after 8-1 the game is over, 100 per cent over, there’s no chance they’re going to come back,” said Edin. The Netherlands, which upset Olympic champion John Shuster of the United States on Saturday, did extend the game with singles in the sixth, seventh and eighth ends before shaking hands after nine. “That was actually good (Magnusson) could play some more rocks,” said Edin. “It might have been one or two ends too long but that’s all right. We play our next game at seven, so we have a long break so doesn’t really matter if it’s half an hour longer.” In the other games, Yuta Matsumura of Japan scored four in the third end and three in the seventh to beat Qiang Zou of China 9-6, Marc Muskatewitz of Germany made a last-rock hit-and-stick in an extra end to nip SooHyuk Kim of South Korea 10-9, and Peter de Cruz and his Swiss mates scored the winning single in the 10th to edge Bruce Mouat of Scotland 5-4.

“We know that this team is probably one of the favourites for this tournament, we know they can play really, really well,” de Cruz said of the young Scottish foursome. “I think maybe they didn’t have their best game and we had a decent game, so I think we deserved to win today.” The two had battled throughout their match, holding each other to singles except in the fifth when Switzerland scored the game’s only deuce. Then it was a case of de Cruz, vice-skip Benoît Schwarz, who throws fourth stones, third Sven Michel, lead Valentin Tanner, alternate Claudio Pätz and coach Thomas Lips, being patient. “We had most of the time the better situations and Bruce played a few really, really key shots to keep them close, but we knew we just had to be patient and grind it out,” said de Cruz. “That’s always the key in curling. Usually when you get a little impatient that’s when you play the price. It’s difficult mentally to always have patience, patience, patients, just keep going, keep going but it was definitely worth it at the end.” The 2019 Pioneer Hi-Bred World Men’s Curling Championship continues with draws Sunday at 2 p.m. and 7 p.m. (all times MT). Live scoring, standings and statistics for the 2019 Pioneer Hi-Bred World Men’s Curling Championship are available at wmcc2019.worldcurling.org/ TSN and RDS2 will provide complete coverage of the 2019 Pioneer Hi-Bred World Men’s Curling Championship. CLICK HERE for the complete schedule. For ticket information for the 2019 Pioneer Hi-Bred World Men’s Curling Championship, go to www.curling.ca/2019worldmen/tickets/ This story will be available in French as soon as possible at www.curling.ca/2019worldmen/?lang=fr