Canadian teams honed in on finals at Curling World Cup

Canada’s output was strong at the Curling World Cup Grand Final on Friday. The five teams wearing the Maple Leaf combined for seven wins out of a possible eight wins and left some teams in favourable position to qualify for Sunday’s final. 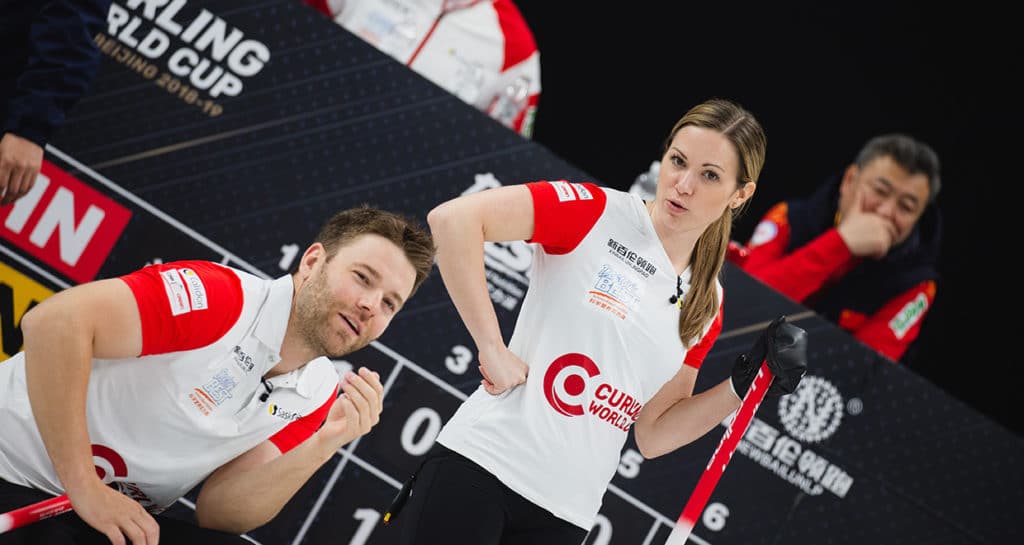 The mixed doubles team of Kirk Muyres and Laura Walker won two games on Friday in Beijing and are one win away from reaching Sunday’s final at the Curling World Cup Grand Final. (Photo, World Curling Federation/Céline Stucki)

The Canadian mixed doubles team of Laura Walker and Kirk Muyres (Edmonton/Saskatoon) leap-frogged the United States in the standings with two victories at Shougang Arena. First, the Canadian duo defeated China’s Cao Chang and Yuan Mingjie for the second time in the double round robin. China scored single points in the first two ends, but Walker and Muyres dominated the remainder of the game and scored nine points over the next five ends for a 9-2 win.

But the team’s biggest test was later in the day against Sarah Anderson and Korey Dropkin of the United States. The American pair started the day in first place but a loss earlier to Switzerland, combined with a 9-8 loss to Walker and Muyres elevated Canada to first in the standings. The high-scoring affair featured a score of three for Canada in the second end, but the United States replied with three of its own in the third. Walker and Muyres played a draw for four in the fourth end to take a solid lead that they held onto for their second win of the day.

“We feel really good. That was one of the best mixed doubles games I’ve played in a long time,” Walker said. “The scores went back and forth, with really well-played ends by both teams. We had the last rock in our hands and Kirk swept it for me brilliantly.”

Walker and Muyres have a 4-1 record and the scenario for the duo is simple at this point. If the team wins its final robin robin game against Switzerland’s Michele Jaeggi and Sven Michel (2-3) at midnight (all times ET) on Saturday, it will advance directly to Sunday’s mixed doubles final.

“We’ve been in many must-win games before. You have no choice – we either win or you’re not in the final,” said Muyres. “We wanted to be relentless and not be denied. We knew it would be a battle because we know Korey and Sarah are two of the best in the mixed doubles game – it worked out.”

It was a bittersweet day for Canada’s other mixed doubles team in the opposite pool. Kadriana Sahaidak and Colton Lott of Winnipeg Beach, Man., picked up two wins on Friday, including a victory against an undefeated team, but were still eliminated from Sunday’s final.

Sahaidak and Lott served Norway’s Kristin Skaslien and Magnus Nedregotten their first loss of the event with a 8-7 shoot-out victory and continued its success with a big 5-3 win against Switzerland’s Jenny Perret and Martin Rios later in the day. The wins lifted Canada to second place in the standings with a 3-2 record and eight points, however Norway’s 4-1 record and 13 points at the end of Friday was enough to qualify the team for Sunday’s final. Teams receive three points for a win in eight ends, two points for a shoot-out win and one point for a shoot-out loss.

Sahaidak and Lott will play for pride – and prize money – in their final game of the event on Saturday at 4 a.m. against Russia’s Maria Komarova and Daniil Goriachev (1-4). 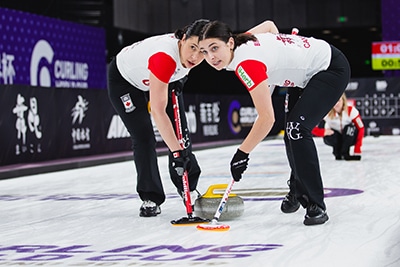 In the women’s competition, Winnipeg’s Jennifer Jones needed two draw-to-the-button shoot-outs to secure two victories on Friday. Jones, vice-skip Kaitlyn Lawes, second Shannon Birchard and lead Jill Officer succeeded in fending off Nina Roth’s team from the United States and denied the Americans of its first win of the championship with an 8-7 victory.

Canada led 7-5 in the final end and the United States played aggressively. Roth hoped to score three for the outright win and receive three points in the standings. Roth played a hit and roll behind cover to sit two on her first shot and Canada’s final draw attempt curled earlier than anticipated. It provided the United States with a draw for the win, but the shot followed the same path and ended up light. The United States settled for two, which led to the shoot-out. Roth threw her rock first and it landed in the back four-foot. Jones – with help from sweepers Birchard and Officer – replied by throwing the stone to the side of the button on the tee-line for the win.

“I threw a couple of bad ones in the fifth end so I was pretty mad at myself, but we got the deuce back in the sixth and we’re able to steal in seven. So we’ll take what we’ve got there. Not our best performance, so we’ll have to be a little bit better this afternoon,” Jones said.

Jones and her team needed another shoot-out to lock up a second win of the day against Japan’s Satsuki Fujisawa. Canada cemented the 7-6 result with its final shot that landed 27.7 cm away from the pin. Though Japan’s Fujisawa wasn’t far off, she and her team had a draw distance of 29 cm.

“Myself, I’m not the biggest fan of shoot-outs but we’ve been on the right side of the inch – literally,” Jones said.

The Canadian women’s team is 4-0 in the standings with two more games on Saturday. Team Jones opens the day with a game against China’s Yilun Jiang (2-2) at 8:30 p.m. on Friday night, followed by a rematch against Roth and United States (0-4) at 7:30 a.m. on Saturday morning.

Both men’s teams played one game on Friday with opposite results. 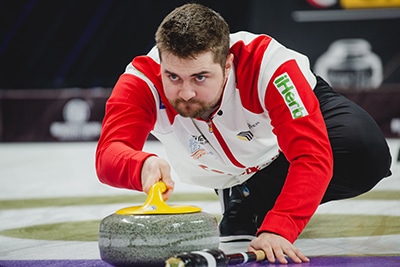 Matt Dunstone and his team from Regina picked up their first win of the Curling World Cup against 2018 Olympic gold-medallist John Shuster on Friday. (Photo, World Curling Federation/Céline Stucki)

Regina’s Matt Dunstone won his first game of the event in a rematch against John Shuster of the United States. Dunstone, vice-skip Braeden Moskowy, second Catlin Schneider and lead Dustin Kidby capitalized on a draw for three in the third end and a steal of one in the fourth to defeat the Olympic gold-medallists 5-2. It was Team Dunstone’s first victory at the Curling World Cup Grand Final.

“We were just kind of playing a little more loose, a little more confident. I mean, it’s been a tough go the first three games, we just kind of looked at it as a fresh start – a brand new round robin – and luckily we were able to string multiple scores together,” Dunstone said.

“It’s our last two games of the season and we were kind of talking last night and we just owe it to ourselves to play the best we possibly can,” Dunstone said. “I think we’re mathematically still alive, but we’re not looking at it that way. We’ve got to worry about ourselves and go out; we want to have fun in these last two games as it’s been a long season for us.”

Calgary’s Kevin Koe lost his only game of the day to Switzerland’s Yannick Schwaller. The 9-3 loss dropped Koe, vice-skip B.J. Neufeld, second Colton Flasch and lead Denni Neufeld to 2-2 in the standings.

Despite the loss, Koe is still in the running for a spot in the final but will need solid output in his final two games. First he plays Norway’s Thomas Ulsrud (0-4) at 8:30 p.m. on Friday night, followed by Scotland’s Ross Paterson (3-1) at 4 a.m. on Saturday morning.

View the full schedule and all teams competing at the final leg in Beijing by CLICKING HERE.