The Canadian team was not content on simply coasting into the playoffs at the 2019 World Mixed Curling Championship. Canada closed the round robin with two more wins on Thursday and finished with an unbeaten record in Aberdeen, Scotland. 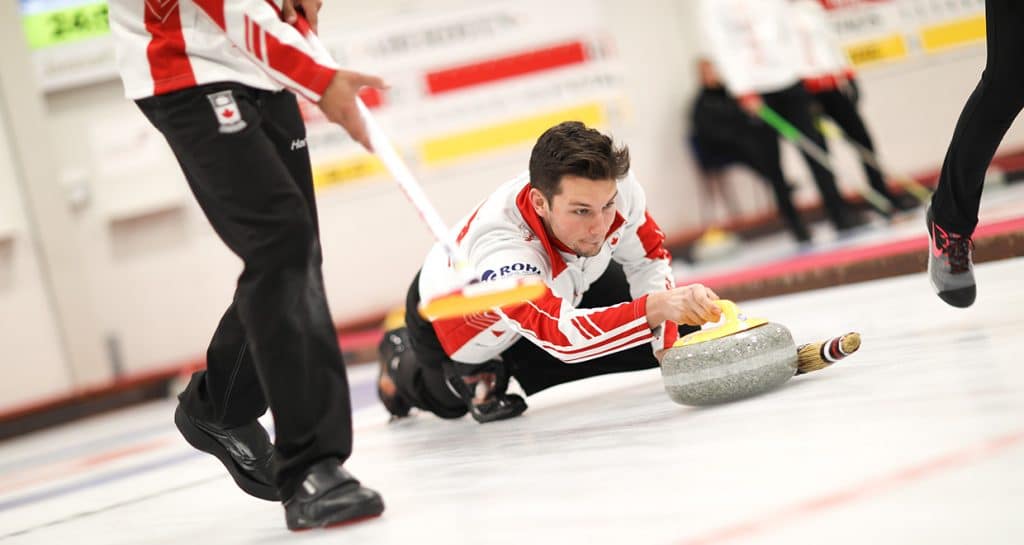 Winnipeg skip Colin Kurz, vice-skip Meghan Walter, second Brendan Bilawka and lead Sara Oliver, along with national coach Jim Waite, started the day with a 7-2 win against Estonia’s Erkki Lill (2-5) in six ends. Canada secured a deuce in the first end and stole a single point in the second for an early lead. The biggest difference was in the fourth end when Canada orchestrated a four-ender for a six-point lead.

“We tried to play that one like it was a playoff game. No fooling around, not just throwing rocks around,” coach Waite said after the game. “It was trying to be very precise and make all the shots like we’ll have to do tomorrow in the playoffs.”

Canada finished the round robin later in the day with a 17-3 victory against Kosovo’s Peter Andersen (1-6). Kurz and his team wasted no time taking the lead with a score of five in the first end. Kosovo took one in the second and Canada replied with another five-ender in the third for an insurmountable lead.

“It was our plan to go out and do our best, obviously coming to a world event you never expect to go 7-0 even though that’s always the goal. But we were able to achieve that. Now it’s a long road in the playoffs,” Kurz said following the team’s final round-robin game. “It’s an interesting playoffs, with 16 teams qualifying and being a single knockout. Every game matters and ever game can be your last. We’ve got to treat every game as importantly as possible and come out and play the best game you can.”

With a 7-0 record, Canada finished tied with fellow pool leaders Russia, Scotland and Spain in the standings. However, Canada’s Draw Shot Challenge distance of 31.72cm was the closest among the tied teams, which secured the top overall seed in the playoffs.

Canada now plays Simon Olofsson of Sweden (4-3) in the round of 16 on Friday at 4 a.m. (all times ET). Sweden qualified for the final playoff spot as the fourth-place team in its pool with the best Draw Shot Challenge.  If Canada wins, it will play in the quarterfinals at 2 p.m.

The semifinals and bronze- and gold-medal games are scheduled for Saturday.