OTTAWA — The Canadian Curling Association (CCA) and World Curling Federation (WCF) have come to an agreement to extend their partnership on hosting world championships through the 2017-18 curling season, it was announced today. 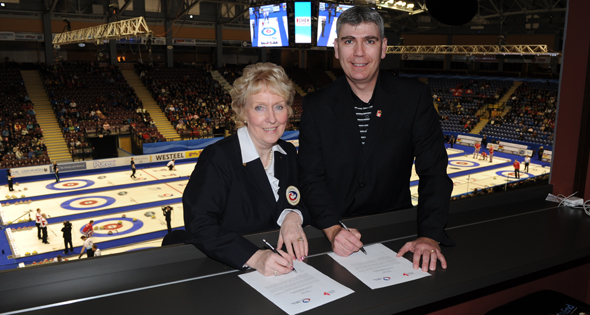 Under the agreement, the existing rotation will be continued for four additional years, which will see Canada host the World Men’s Championships in 2015 and 2017, and the World Women’s Championships in 2016 and 2018. Canada is already scheduled to host the 2014 Ford World Women’s Championship, March 15 to 23, at Harbour Station in Saint John, N.B. “The extension of our partnership with the World Curling Federation will benefit curling fans in Canada and around the world,” said Canadian Curling Association Chief Executive Officer Greg Stremlaw. “This agreement is another sign that the CCA and WCF want to work together to continue building the sport of curling and showcase its top players in the best way possible on a global stage.” Under terms of the extended agreement, the CCA, in consultation with the WCF, will determine the host cities for Canadian-hosted World Championship events. As well, the CCA will own the presenting sponsorship position for World Championships staged outside of Canada, while the host committees for events in Canada will continue to receive a percentage of gross ticket sales. Additionally, TSN/RDS, the official broadcast partner of the CCA in an agreement that runs through the 2019-20 curling season, will continue to hold exclusive broadcast rights in Canada for the world championships, regardless of where they’re played. “The WCF is delighted to extend our agreement with the Canadian Curling Association,” said WCF President Kate Caithness. “This will ensure that alternating World Championships will continue to be held in Canada and will be a joint operation between the WCF and CCA. Our partnership to date has been extremely constructive and beneficial to the development of our sport and we will be looking to build on such success over the coming years.” As part of the announced extension, InFront Sports & Media, the marketing partner of the WCF, has agreed to partnership terms with the CCA to allow the CCA comprehensive sponsorship and marketing rights related to the World Championship events held in Canada. About the Canadian Curling Association The Canadian Curling Association (CCA) is the national sport governing body responsible for the development, promotion and organization of curling in Canada. In cooperation with its Provincial and Territorial Member Associations from across Canada, the CCA provides programs and services to curlers ranging from the youngest ‘little rocker’ (age 7 and up), to those participating at ages 70 and over – and from aspiring Olympians to Canadians with special needs, coaches, curling facility operators, ice makers and officials. The CCA also oversees and provides the comprehensive management of the Season of Champions event portfolio; develops and administers the Canadian Team Ranking System (CTRS) for Olympic qualification; and organizes and operates the championship system for Juniors (under 20), Seniors (over 50), Mixed, Women, Men, University and Wheelchair. About the World Curling Federation The World Curling Federation (WCF) is the international sport federation governing the Olympic winter sport of curling and the Paralympic winter sport of wheelchair curling. The WCF is one of seven International Sports Federations currently part of the Winter Olympic program. It represents 50 Member Associations and is generally acknowledged to direct one of the fastest-growing international winter sports.