Technology on the ice: Not just for elite curlers

When groups of eager curlers took to the ice at the recent Team Howard Fantasy Curling Camp, they were looking for instruction from “the pros” on delivering the perfect curling shot. And they got it – thanks to some nifty technology that provides immediate feedback and encourages quick correction of bad habits. “Scott Taylor is absolutely amazing,” said five-time camp attendee Sheila Smith of Brampton, Ont., about Team Howard’s longtime coach. 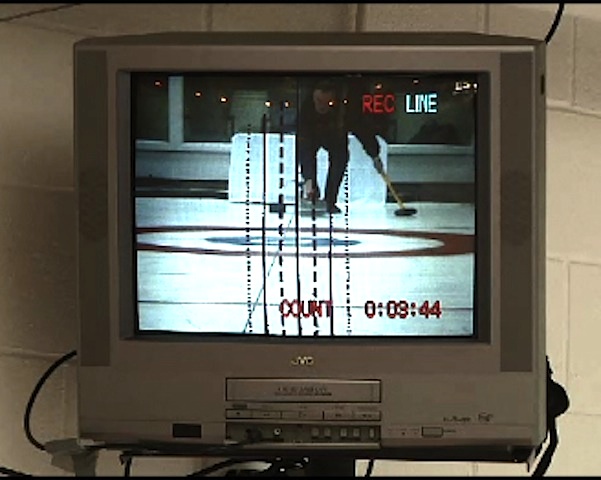 Taylor introduced campers to the Balance Plus Video System, created by Balance Plus founder Lino Di Iorio in 1996 and used by Taylor to help correct that classic curling pitfall: faulty line of delivery. The system uses a strategically placed video camera on a corner of the sheet, and a replay screen marked to show various lines of delivery. “Our sessions at the camp had three goals,” explained Taylor. “One was to show the curlers the intended line of delivery in multiple locations across the sheet. The second was to enable the curler to see if their opinion of where they slid was realistic. The third was to adjust their delivery as required to enable them to slide on the intended line of delivery.” For Smith, the results were impressive. “The first thing he asks you when you see your video of your delivery is where do you think you will end up,” she said. “In Year One, for the line of delivery, I went off the screen – well, almost.” Smith said she improved every year she came to camp, and by her fourth season, she was almost 90 per cent on the line of delivery. “Scott was literally amazed – and so was I,” she said. Another tool used at the camp is a video camera that captures curlers sliding out of the hack towards a laser beam pointed at the centre of the rock. Curlers deliver four rocks – two with each turn – then are able to watch the replay on a laptop set up at a station on the ice, watching to see if the laser beam stays in position on the rock as they slide toward the camera. Smith found the laser exercise useful, despite the extra challenge of being left-handed. Overall, it’s a simple set-up that offers quick results. 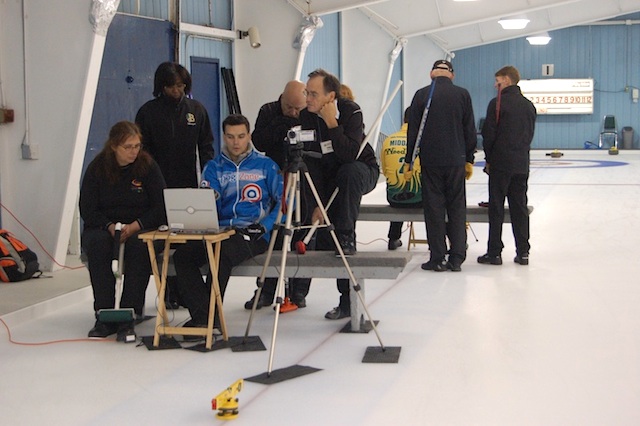 “I thought the use of video recording was very useful,” said Phil Coulter of the Thornhill Golf and Curling Club, who was attending the camp for the first time. “It showed very clearly where I was going wrong in my delivery. The good thing was that the set-up was reasonably simple, so I could repeat it at home.” For Peter Brown of Boston, also a first-timer at the Team Howard camp, the video feedback was very helpful. “It’s one thing to be told that your sliding foot is in the incorrect position,” he said. “But it really sinks in when you watch the video and can see what you are doing,” he said. Some curlers have reservations about new-age technology, however. For Skid Crease, of the King Curling Club, the video was effective, but he feels the old-fashioned string from the hack still has a place. “I don’t like too much technology, but have always believed in video replay for athletic candidates to see their own performance,” said Crease. “Coach observes, provides feedback; candidate thinks coach has missed their excellent LOD (line of delivery); coach videos, candidate sees; candidate believes video and becomes more likely to accept coach’s feedback and adjustment advice in the future.” Crease said he enjoyed both the Balance Plus Video session with Taylor, as well as the laser video replay, but he doesn’t mind an old-school approach either. “I still like the string and the price that goes with it,” he said. “It takes more time to set up the laser and camera than it does to roll out the string. And it’s less expensive and pretty well damage-proof.” 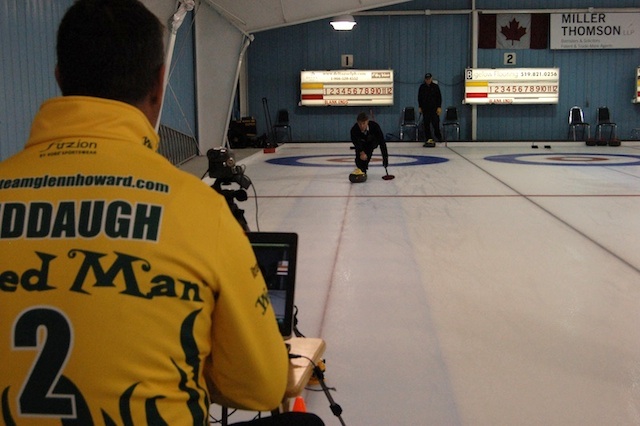 But video is here to stay, according to Jennifer Ferris, a Level 3 Certified Coach and National Team Leader at the World University Games, who was one of the coach-instructors at the camp. “The video is great at validating what the athlete has likely already heard,” she said. “More experienced coaches can detect brushing or delivery faults with the naked eye, but the athlete doesn’t always understand the issue until they see it themselves. What’s even better is the instant feedback. An athlete gets to view their delivery, receive feedback and immediately implement the changes.” Factor in the ease with which everyday technology can be used to record action on the ice, and it’s clear that curlers of all levels have a valuable training resource in hand. “I really think that video analysis is a great resource for (a range of) developing to elite curlers,” said Ferris. “The exciting thing about video analysis is that you don’t need a lot of ‘fancy’ equipment. As recently as five years ago, coaches were spending hundreds of dollars to outfit themselves with cameras, laptops, tripods and software. Now most smart phones and tablets have cameras that will record quality video.” “They say a picture is worth a thousand words,” added Team Howard coach Taylor. “There is no limit to what can be learned from video. The five-minute-per-curler video sessions at the Team Howard Camp are much too short. We only get to scratch the surface on how much we could help the curlers to improve.”