LIVERPOOL, N.S. — Another young curling team from Northern Ontario is making noise on the national stage. Just over a month after Brad Jacobs and his team from Sault Ste. Marie, Ont., went unbeaten to win the Tim Hortons Roar of the Rings and earn the right to represent Canada at the Winter Olympics in Sochi, 15-year-old Tanner Horgan is making people sit up and take notice at the M&M Meat Shops Canadian Junior Men’s and Women’s Curling Championships. 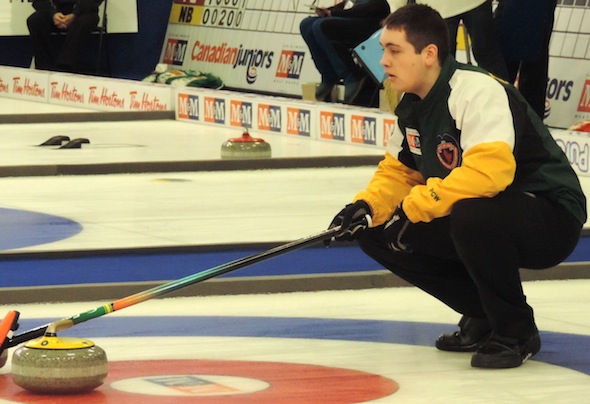 Horgan’s team from Sudbury — third Nick Servant, second Jacob Horgan (just 13, and Tanner’s brother), lead Max Blais and coach Gerry Horgan (Tanner and Jacob’s dad) — opened championship-round pool play on Wednesday at Queens Place Emera Centre with a 10-5 win over B.C.’s Cameron de Jong (3-4, Victoria). And, yes, the performance of the Jacobs team has served as an inspiration for Team Horgan. “He’s been so successful, and we look up to him so much. It was just amazing to see what he did at the Trials,” said Tanner Horgan. “I was glued to my TV; it was amazing to see those guys win, especially from Northern Ontario. Nick actually curls in Brad’s club (at the Soo Curlers Association). “Oh, we were definitely inspired. I’m a huge fan of their team — just the fact they’re so young and doing so well.” Which is a description of his own team, of course, although Horgan was quick to play down the comparison. The team looked like veterans on Wednesday, putting the win away with a stolen three in the ninth end. “We’re A little bit surprised, yes,” he conceded. “Our goal this week was to try to make the championship round, and I guess we’re still doing pretty well. So far, so good.” The championship round will determine the three teams that participate in Sunday’s playoffs. In other championship round games, Saskatchewan’s Tyler Hartung (5-2, Kronau) doubled Alberta’s Carter Lautner (5-2, Calgary), Manitoba’s Braden Calvert (7-0, Winnipeg) held off New Brunswick’s Rene Comeau (5-2, Fredericton) and Ontario’s Ryan McCrady (5-2, Ottawa) scored two in the 10th end for a 5-4 win over Nova Scotia’s Robert Mayhew (4-3, Windsor). In women’s championship round action, Alberta’s Kelsey Rocque (7-0, Edmonton) extended her win streak by knocking off Ontario’s Molly Greenwood (5-2, Kitchener-Waterloo) 8-3, B.C.’s Kalia Van Osch (5-2, Nanaimo/Delta) stole two in the ninth end for a 7-6 win over Nova Scotia’s Mary Fay (5-2, Chester), Saskatchewan’s Kristen Streifel (4-3, Saskatoon) scored a big three in the ninth end for a 8-6 win over New Brunswick’s Jessica Daigle (4-4, Fredericton), and Manitoba’s Meaghan Brezden (4-3, Winnipeg) downed Quebec’s Camille Boisvert (3-5, St-Romuald) 7-3. Action at the 2014 M&M Meat Shops Canadian Juniors continues on Wednesday with a draw at 6:30 p.m. (all times Atlantic). Round-robin games are taking place at both Queens Place Emera Centre and the Liverpool Curling Club in the beautiful South Shore region of Nova Scotia. Once the top three teams for each gender have been determined, all playoff games will be played at Queens Place Emera Centre. The women’s final is Saturday while the men’s final is Sunday Both finals will be televised live on TSN/RDS2 at 4 p.m. AST/3 p.m. EST. For the second consecutive year, the competition format involves all 14 Member Associations of the Canadian Curling Association (10 provinces, plus Northern Ontario, Northwest Territories, Nunavut and Yukon). This story will be posted in French as soon as possible at www.curling.ca/2014juniors-fr/ The full scoreboard can be viewed at www.curling.ca/scoreboard The leaderboard can be viewed at www.curling.ca/2014juniors-en/standings