LIVERPOOL, N.S. — It took some extra time, but it was worth the wait for B.C.’s Kalia Van Osch at the 2014 M&M Meat Shops Canadian Junior Men’s and Women’s Curling Championships. 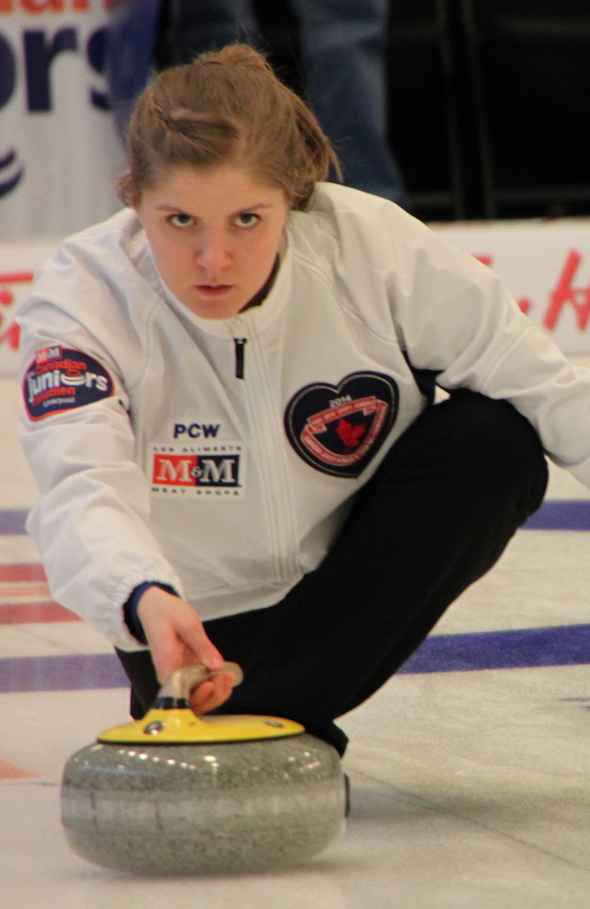 Van Osch’s team, which hails from Nanaimo and Delta, needed an extra end for a 7-6 win over New Brunswick’s Jessica Daigle (4-6, Fredericton) on Thursday afternoon at Queens Place Emera Centre. The win clinched a playoff berth for Van Osch, third (and younger sister) Marika Van Osch, second Sarah Daniels, lead Ashley Sanderson and coach Jim Newlands. The B.C. team is getting hot at the right time; after going 4-2 in the preliminary round, B.C. has rattled off four straight wins in the championship round and will play in Saturday’s 9:30 a.m. semifinal. “Winning all four of our games was a pretty big bonus, and it’s a bit of a load off,” said Kalia Van Osch. “We don’t have to worry about playing a tiebreaker; we know we’re in the semi. We had a couple close games this week that we didn’t win where I didn’t make the last shot, so it was really nice to go out there and have to make that last shot and deal with the pressure — that’s what’s going to be coming in the playoffs.” Van Osch arrived in Liverpool extra motivated after big sister Kesa won her first B.C. women’s title earlier this month, and will skip B.C. at the 2014 Scotties Tournament of Hearts, beginning Feb. 1 in Montreal. “That was a huge inspiration,” said Kalia Van Osch. “My sister has been a great inspiration to me and Marika. She’s the one who taught me strategy and who I learned so much from; between her and Jim (Newlands), a lot of what we do here comes from them.” Meanwhile, in men’s championship round play, Alberta’s Carter Lautner (6-3, Calgary) beat Ontario’s Ryan McCrady (5-4, Ottawa); Saskatchewan’s Tyler Hartung (6-3, Kronau) downed B.C.’s Cameron de Jong (5-5, Victoria/Delta) 11-4; and Manitoba’s Braden Calvert (9-1, Winnipeg) turned back Nova Scotia’s Robert Mayhew (5-4, Windsor) 8-2. In the men’s seeding round, which determines the final rankings to set the pools for the 2015 M&M Meat Shops Canadian Juniors in Corner Brook, N.L., P.E.I.’s Kyle Holland (2-6, Charlottetown) beat Nunavut’s Jamie Airut (0-8, Rankin Inlet) 12-2. The top three teams at the end of round-robin play will to to the women’s playoffs on Saturday, with the second- and third-place teams meeting in the semifinal at 9:30 a.m. (all times Atlantic), with the winner advancing to the gold-medal game at 4 p.m. against the first-place team. Action at the 2014 M&M Meat Shops Canadian Juniors continues Thursday with a draw at 6:30 p.m. (all times Atlantic). Round-robin games are taking place at both Queens Place Emera Centre and the Liverpool Curling Club in the beautiful South Shore region of Nova Scotia. Once the top three teams for each gender have been determined, all playoff games will be played at Queens Place Emera Centre. The women’s final is Saturday while the men’s final is Sunday Both finals will be televised live on TSN/RDS2 at 4 p.m. AST/3 p.m. EST. For the second consecutive year, the competition format involves all 14 Member Associations of the Canadian Curling Association (10 provinces, plus Northern Ontario, Northwest Territories, Nunavut and Yukon). This story will be posted in French as soon as possible at www.curling.ca/2014juniors-fr/ The full scoreboard can be viewed at www.curling.ca/scoreboard The leaderboard can be viewed at www.curling.ca/2014juniors-en/standings