2014 Scotties Tournament of Hearts gets underway on Saturday

MONTREAL — Reigning champion Rachel Homan and her Ottawa team will begin its title defence on Saturday in Montreal when the 2014 Scotties Tournament of Hearts opens play at Maurice Richard Arena. 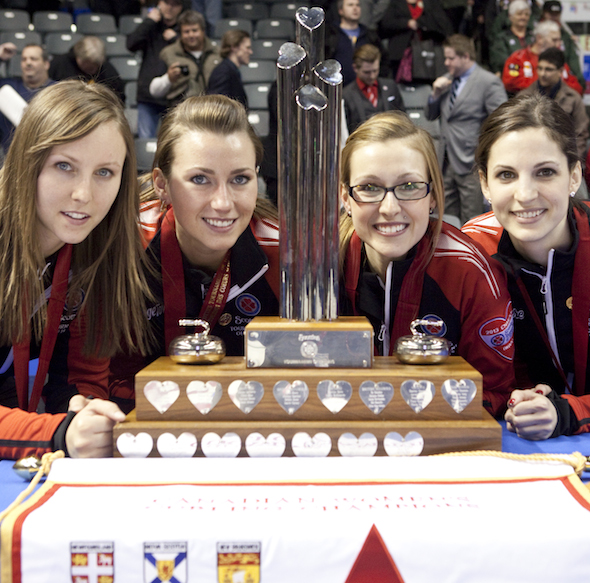 Fresh off contributing to Team North America’s victory at the 2014 World Financial Group Continental Cup in Las Vegas, Homan, third Emma Miskew, second Alison Kreviazuk and lead Lisa Weagle will don Team Canada colours in Montreal in a bid to win back-to-back titles at the Canadian women’s curling championship. But it will be a tall order as the field in Montreal, which takes to the ice for the first draw Saturday at 2 p.m (all times Eastern), following the opening ceremonies at 10:30 a.m., will feature a blend of battle-tested experience and eager newcomers, and a hometown favourite wearing the colours of Quebec, who will most certainly have the crowd on her side. So, too, will 20-year-old Sarah Koltun of Whitehorse; she will make history in Montreal as  the only skip to ever compete in both the Scotties and M&M Meat Shops Canadian Junior Championships (she skipped the Yukon team last week in Liverpool, N.S.) in the same season; she is the third-youngest player to ever skip at the Scotties, behind only Maureen Miller of the Territories in 1984 and Andrea Crawford (nee Kelly) of New Brunswick in 2006. Contrasting with rookies Koltun and B.C.’s Kesa Van Osch of Victoria (just 22) are veterans such as Heather Strong of Newfoundland/Labrador (in her 11th Scotties, playing out of St. John’s) and Kim Dolan of Prince Edward Island (her 10th; she’s based in Charlottetown). Look for three-time Canada Cup champion Stefanie Lawton of Saskatoon to be a playoff contender in pursuit of Saskatchewan’s first Scotties title since Amber Holland prevailed in 2011, along with Manitoba’s Chelsea Carey (Winnipeg), a solid performer on the cashspiel circuit who will make her long-awaited Scotties debut in Montreal. Another name to watch for is Alberta’s Val Sweeting (Edmonton), who will be in her second Scotties. Her team has enjoyed a terrific 2013-14 season, including a qualifying berth at the Capital One Road to the Roar Pre-Trials in Kitchener, Ont., and a solid run at the Tim Hortons Roar of the Rings in Winnipeg. And the eyes of Quebec will be on Allison Ross, who plays out of the Glenmore Curling Club just outside of Montreal, and will be looking to improve on her 3-8 record at the 2013 Scotties. The field will be rounded out by Alli Flaxey of Ontario (Listowel), Heather Smith of Nova Scotia (Halifax) and Andrea Crawford of New Brunswick (Oromocto). 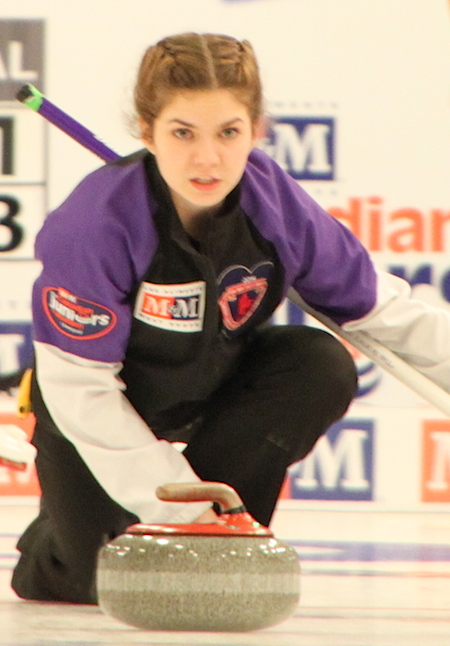 The teams will play an 11-game round-robin draw that will conclude on Friday, Feb. 7. The top four teams will make the Page playoff round, which sees the first- and second-place teams playing for a berth in the final, which is scheduled for Sunday, Feb. 9 at 7:30 p.m. The third- and fourth-place teams will also meet, with the winner moving onto the semifinal on Feb. 8 at 4 p.m.. The loser of the three-four game will play the semifinal loser in the bronze-medal game on Feb. 9 at 2:30 p.m. In addition to the playoff race during the round-robin schedule, there will also be a battle at the other end of the standings. The two teams with the fewest overall wins in the 2012, 2013 and 2014 Scotties will be assigned to the pre-event qualifying tournament just prior to the 2015 Scotties in Moose Jaw, Sask. At that time, those teams will play off against Northern Ontario and Nunavut (who will be eligible to compete in the Scotties for the first time in 2015) for the 12th and final berth in the 2015 Scotties field. Team Canada, as defending champion, and Saskatchewan, as the host province in 2015, are exempt from the play-in tournament, while each of the Territories (Northwest, Yukon and Nunavut) can send teams for the first time. The two-year win totals coming into the 2014 Scotties are as follows: Manitoba (20), B.C. (16), Ontario (14), Saskatchewan (11, exempt), New Brunswick (11), Quebec (10), Nova Scotia (9), Alberta (8), P.E.I. (8), Northwest Territories (6), Newfoundland/Labrador (6), and the Yukon (0). TSN/RDS2, the official broadcaster of the CCA’s Season of Champions, will provide extensive coverage of the 2014 Scotties Tournament of Hearts, with 66 hours of live broadcasts scheduled. The winner of the 2014 Scotties Tournament of Hearts will represent Canada at the Ford World Women’s Curling Championship, presented by Booster Juice, March 15 to 23 in Saint John, N.B. The 2014 Scotties marks the 33rd year of Kruger Products Limited’s sponsorship of the Canadian women’s championship. For ticket information, go to: www.curling.ca/2014scotties-en/tickets/ For schedule information, go to: www.curling.ca/2014scotties-en/draw-schedule/