Team Canada off to gold-medal game at 2014 Ford Worlds 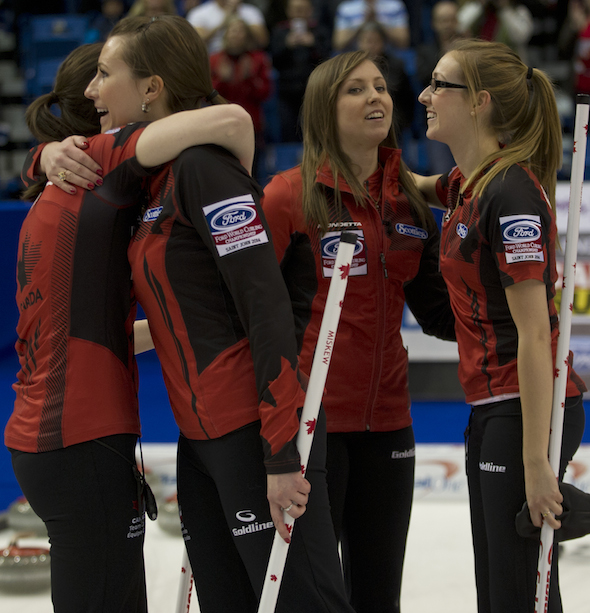 But Rachel Homan’s team from Ottawa was in no mood to take advantage of its second life in the Page playoff system. Instead, Homan — backed up by third Emma Miskew, second Alison Kreviazuk, lead Lisa Weagle, alternate Stephanie LeDrew, team coach Earle Morris and national coach Elaine Dagg-Jackson — went out Friday night at Harbour Station in Saint John, N.B., and coolly dominated Binia Feltcher and her Swiss team 8-3 in the Page playoff 1-2 game. With the victory, Team Canada advances to the women’s worlds gold-medal game for the first time since Amber Holland bowed to Sweden’s Anette Norberg in 2011 at Esbjerg, Denmark. The last time Canada won the gold medal was in 2008 when Jennifer Jones prevailed in Vernon, B.C. The gold-medal game is set for 7:30 p.m. (all times Atlantic) on Sunday. “This was the game we wanted to get to,” said Homan. “Our goals are complete so far, I mean we have one more to go and we want to get that gold this time.” The Canadians were never really threatened by a Swiss team that was responsible for handing Canada its only round-robin loss. Thanks to a solid performance from the middle of the lineup — Kreviazuk was terrific, shooting 90 per cent with a couple of highlight-reel triple-takeouts in the early going — had looks at points in every end she had the hammer. Canada scored one in the second end, stole one in the third and added a deuce in the fifth. 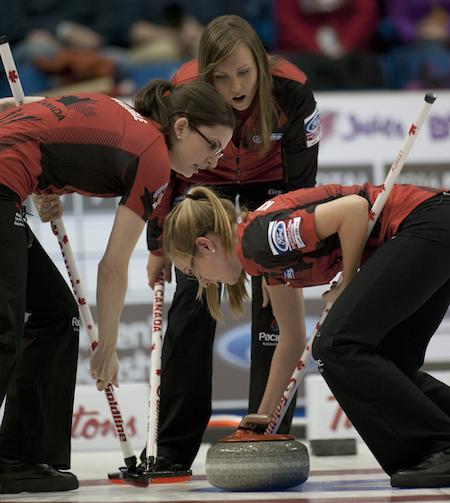 Switzerland had a shot at a steal in the seventh, but Homan made a perfect inturn draw to the four-foot to get out of the jam looking at three Swiss counters. An end later, with the Swiss working on a deuce, Homan brought the crowd to its feet with a cross-house double takeout to force Feltscher to draw for a single while looking at four Canadian stones. Homan put the game away with a hit for three in the ninth to prompt handshakes. “Everybody made some really big shots that game,” said Homan. “Some amazing runbacks and we really nailed the lines this game. And even when we made some mistakes, we made some big ones after that and recovered. It was definitely a team effort out there and I’m really proud of my team for the show that they put on tonight. I mean, credit to the Swiss, we had to make some crazy shots because they were playing really well.” “We definitely came out to play today,” added Miskew. “It wasn’t perfect, but we played really well and made the key shots when we needed to. We’re used to being the only game on the ice. It took us a few times to really enjoy the experience, but we love the crowd. We had a lot of fun today.” Switzerland will take its second shot at qualifying for the gold-medal game in Saturday’s semifinal at 2 p.m. The Swiss will take on the winner of the Page 3-4 playoff game Saturday at 9 a.m. between Russia’s Anna Sidorova and South Korea’s Ji-sun Kim. “Congratulations to Canada, they played really, really, really well,” said Swiss third Irene Schori. “I think we also played really good but Alison had some big shots that were awesome. It was awesome to play with the fans in the stands. They were so loud and we were so excited. We are still happy and we’ll have to do the next game better and hope to see Canada in the final again.” The winner of the Page 1-2 game will go straight through to Sunday’s 7:30 p.m. gold-medal game, while the loser will drop to the semifinal Saturday at 2 p.m. against the winner of the Page 3-4 game. The semifinal loser and the Page 3-4 loser will play for the bronze medal Sunday at noon. “It’s all confidence right now,” said Homan. “We’re feeling really good and we’re going to be nervous come the gold-medal game, but it’s going to be a good thing. It means a lot to us and we want to bring back gold for Canada.” All playoff rounds for the 2014 Ford World Women’s Curling Championship will be televised on TSN/RDS/RDS2, the official broadcasting partner of the Season of Champions. Live scoring is available at: www.curling.ca/scoreboard/?e=58 To purchase tickets to the Ford World Women’s Curling Championship, presented by Booster Juice, go to: www.curling.ca/2014worldwomen-en/tickets/ The French version of this story will be available at www.curling.ca/2014worldwomen-fr/ as soon as possible. Follow @ccacurling on Twitter (#FWWCC) for updates during the 2014 Ford Worlds.