A productive five days of learning, discussions and meetings wrapped up with the election of two new members of the Canadian Curling Association Board of Governors, a new chair and vice-chair, new formats for the Canadian Senior and Mixed Curling Championships, and some tweaks to the Canadian rulebook. 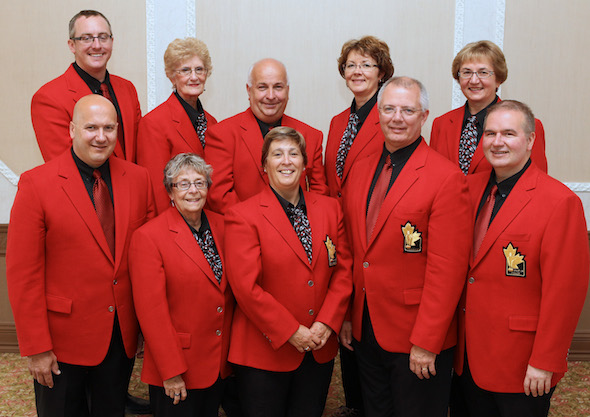 The first Canadian Curling Summit in Niagara Falls, Ont., saw participants from across the country engage in a variety of discussions, all aimed at continuing the growth of curling in Canada. Following the Summit and the inaugural Swing & Sweep Golf Tournament, presented by Pinty’s, which raised funds for the For the Love of Curling philanthropic program, delegates from the CCA’s 14 Member Associations as well as the Board of Governors met for the National Curling Congress on Thursday, followed by elections of officers and voting on motions. “It was a wonderfully positive week in Niagara Falls, and I think it’s safe to say that everyone came away with a really positive feeling about the future of our sport and ways to reach out to new participants, both young and old,” said Greg Stremlaw, Chief Executive Officer for the CCA. “After such an amazing 2013-14 curling season, it was great to be able to share our successes with people from across the country, while still maintaining our focus on improving on what we have, both at the high-performance and grassroots levels.” The Board of Governors elected Marilyn Neily of Pleasantville N.S., as Chair for the 2014-15 season, and Bob Osborne of St. John’s, N.L., as vice-chair. Additionally, delegates voted in new governors Scott Comfort of Wadena, Sask., and Liz Goldenberg of North Vancouver, B.C., four-year terms. Among the motions that were approved by delegates during the meetings: — The two-year trial for the Canadian Mixed Doubles Trials was extended for another year, with a decision expected in the next 12 months on whether the discipline will be included as a medal sport for the 2018 Winter Olympics in Pyeongchang, South Korea. — The qualifying rounds at the Canadian Seniors and Mixed Championships were eliminated and replaced by a similar 14-team direct-entry format that is currently used at the M&M Meat Shops Canadian Junior Men’s and Women’s Championships, with the 14 teams split into two seven-team pools, and the top-four finishers from each pool advancing to the championship round-robin. As well, games at both the Seniors and Mixed nationals will be reduced to eight ends, falling in line with international competitions. — Effective as of the 2015-16 curling season, the age-eligible date for juniors to play at the M&M Meat Shops Canadian Juniors was shifted six months back to fall in line with the World Curling Federation rules. Previously, Canadian juniors had to be 20 and under as of Dec. 31 of the year prior to a Canadian championship; now they have to be 20 and under as of June 30 of the previous year. Prior to this change, non-Canadian players at the World Junior Championships could be up to six months older than the eldest Canadian player. — Among various minor tweaks to the Canadian rulebook that will govern the sport here from 2014 through 2018 was a change in the timing system. Thinking time for 10-end games will be reduced to 38 minutes from 40 minutes, and to four minutes and 30 seconds in the extra end from five minutes. This change is also expected to be made by the World Curling Federation later this month. — A proposal to investigate potential resources to help teams participating in the qualifying round at the Tim Hortons Brier and Scotties Tournament of Hearts was approved, with report to be presented to the membership at the 2015 National Curling Congress.