The honours continue to flow for Canada’s wheelchair curling Paralympians. 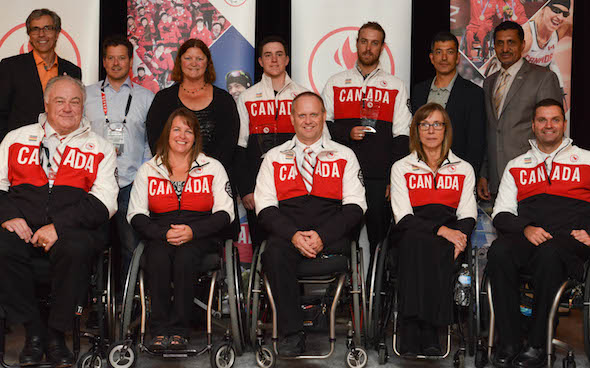 Fresh off a season during which Team Canada claimed its third consecutive Winter Paralympics gold medal, the national squad picked up two major awards at the Canadian Paralympic Committee 2014 Sport Awards Ceremony in Toronto. The national team, consisting of Jim Armstrong (Cambridge, Ont.), Ina Forrest (Armstrong, B.C.), Sonja Gaudet (Vernon, B.C.), Dennis Thiessen (Sanford, Man.), Mark Ideson (London, Ont.), head coach Joe Rea (Prince George, B.C.) and team leader Wendy Morgan (Burlington, Ont.) won the Best Team Performance award after its triumph at the Paralympics in Sochi. Team Canada set Paralympic scoring records for most points scored as well as largest margin of victory. Additionally, Forrest was named Best Female Athlete after winning her second straight Paralympic gold medal, and moving from her usual second position to vice-skip down the stretch run of the Paralympic competition. “This really is more of a team award,” said Forrest. “Although it ultimately comes down to throwing the rock, there is a lot of team effort that goes in to it before that happens. I have tremendous teammates and staff, and everything is there to make the athletes play the very best they can be.” “This truly is a pleasure and a real honour,” added Armstrong, who also skipped the 2010 Paralympic champs. “Wheelchair curling has only been around 14, 15 years but we have been well adopted by the Canadian Curling Association and all the sponsors. We’ve developed a presence that far exceeds our numbers in the way we’ve been embraced by the curling community and the community at large. It’s been a thrill. Here’s hoping there’s enough tread on these wheels to last another four years.” The Paralympic Sport Awards celebrate top athletes, recognizing their achievements from the most recent Paralympic Games, in addition to honouring and recognizing the contribution of coaches. “It was absolutely thrilling that our wheelchair team was able to successfully defend its Paralympic gold medal and keep the Maple Leaf at the top of the medal podium,” said Canadian Curling Association Chief Executive Officer Greg Stremlaw, who was on hand for the awards ceremony. “We finished the season at No. 1 in the world wheelchair curling rankings, and our focus is on staying there.” The Canadian Paralympic Team placed third in the gold medal count in Sochi with 16 medals – seven gold, two silver and seven bronze. “The commitment, dedication and spirit shown by our athletes in Sochi are an inspiration to all Canadians,” said the Honourable Bal Gosal, Minister of State (Sport). “We are proud to support the Canadian Paralympic Team and celebrate its remarkable achievements.”