Curling coaching: Not just for the pros

Coaching and skills instruction can benefit more than just elite curlers, a trend the Alberta Rocks Curling Camp proved with great success recently when it welcomed over 60 adult recreational club curlers looking for instruction on how to improve their curling delivery, sweeping, strategy and mental game play. The 15th annual camp, held at the Leduc Recreational Centre Sept. 26-28, was hosted by the Alberta Curling Federation and run by Paul Webster, Provincial High Performance Coach for the Alberta Curling Federation as well as National Development Coach for the Canadian Curling Association. Coaches consisted of curlers with junior or adult experience at provincial, national or world levels. 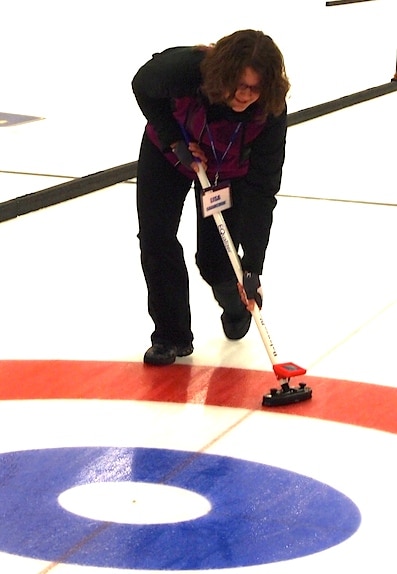 Three participants – Shay-Lee Savill, Ryan Thompson, and friend Megan Hogendoorn – came from Edmonton to experience camp for the first time. “After being taught piecemeal how to curl, it’s nice to put it all together from beginning to end at an actual camp,” says Hogendoorn, who appreciated the small-group coaching that Alberta Rocks offers. “Even though you’re in a group setting, it helps you personalize things, not just general curling rules you get all the time, but actual individualized instruction, which is nice.” Savill, who comes from a family that has always been into curling (her cousin is Team Glenn Howard lead, Craig Savill) and who was responsible for encouraging her fiancé, Thompson, to try the sport, appreciates the benefits of getting such thorough instruction. “So often we’re just given tidbits here and there on how to curl, but to have it actually go from the very beginning and learn the proper steps with it, then you can actually practice it each game,” she says. “And it gives you a little bit more confidence that if I want to do it the right way, I have at least some knowledge of how to do it.” “It’ll help make curling more enjoyable because you can actually make some shots and understand what you’re doing and how to do it, and feel better about yourself,” says Thompson. “I think it’s (a sport) that we’ll play for a long time so we’ll definitely benefit from learning the right way to throw a rock.” Experienced coaching is extended even further with the use of current technologies that enable participants to see their exact skill level. Participants have a chance to try sweeping with a performance broom that measures stroke pressure and speed. The instant feedback available on a small screen near the brush head proved to some curlers that they were effective sweepers, and to others that maybe they need to spend a bit of time talking to their coach about improving their sweeping technique! At various points over the weekend, tablet computers were also seen on the ice, being used to film a curler’s line of delivery. Curlers then gathered around the tablet while coaches used a free application called Coach’s Eye to play back and analyze technique, offering tips for improvement. For the new and veteran curlers alike, this was probably the first time they’d ever seen and analyzed their own delivery. 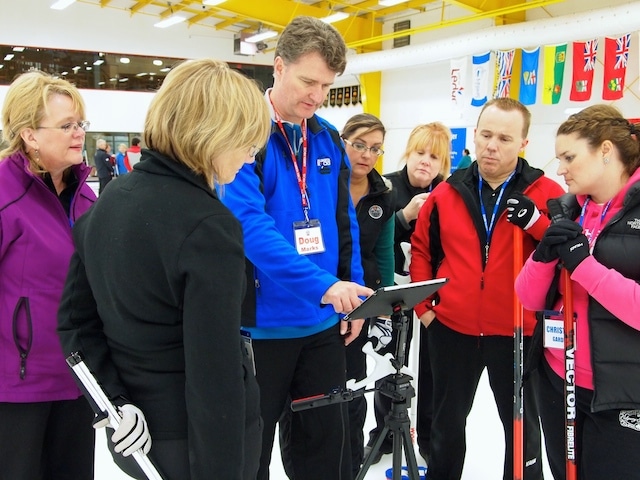 Doug Marks comments on a video recording of a teammates alignment during delivery. (Photo by Lisa Shamchuk)

But group or individualized coaching is something the average club curler rarely receives. “We really need to work better in our sport to promote instruction,” says Webster, “The group on Sheet 8 are all people who’ve played for 20, 30, 40 years. And for some of them this is their second lesson. They took the ‘introduction to curling’ lesson like a good signer-upper did and they haven’t had a lesson since. So it’s getting that understanding, like in golf, that instruction should be an ongoing thing through your career.” Dr. Neville Headley, from Calgary, is a returning participant, attending his fourth Alberta Rocks Adult Curling Camp. “I wanted to learn more about the technical aspect, the strategy aspect, the delivery and the game itself – and this seemed like the perfect place to do that,” he says. “What I learned was much more than that. I learned that I needed to update the way I practiced, the way I trained, my approach to the game, my delivery, all aspects of the game. And that’s why I keep coming back. Every year I learn more and more about the sport and it accelerates and motivates me to do better.” Headley has also been able to take what he’s learned at curling camp and apply it closer to home: he conducts a Learn How to Curl clinic for the Calgary Dental League. 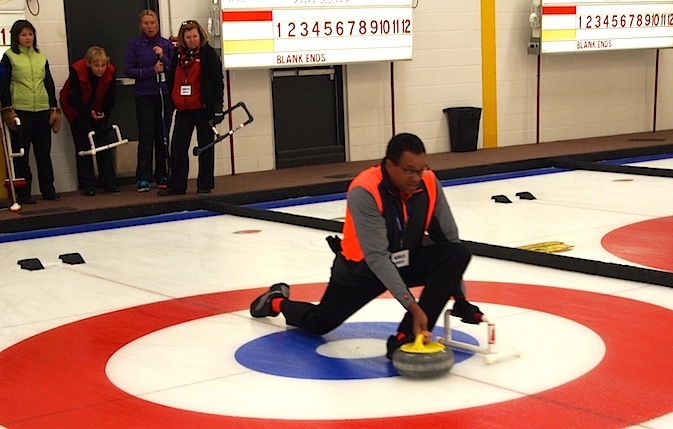 Dr. Neville Headley practices his delivery while his teammates and coach look on. (Photo by Lisa Shamchuk)

“I’ve always maintained that there’s three reasons why an adult does not start a new sport,” Headley says. “Number one: they don’t want to get hurt. Number two: they don’t want to embarrass themselves. And number three: they don’t want it to be too expensive. Curling meets all that criteria. If you do it properly you’re not going to get hurt, you’re definitely not going to embarrass yourself and it doesn’t cost very much to get started.” Ultimately, Webster believes the camp meets the recreational curlers’ needs and sends them home happy. “The majority of our participants leave having looked after their five or six top wants out of the camp,” he says. “The adults are here to enjoy themselves and that’s really our priority.”